Are You Clever Enough to Escape Gettysburg? 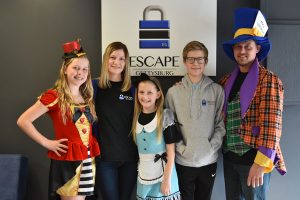 For entertainment, Emmitsburg resident Rick Oleszczuk, along with his wife, Erin, and children, were once trapped in an underground playground in Nashville. They barely escaped, and decided that they had so much fun that they wanted to trap other people. That’s why they opened Escape Gettysburg.

“We didn’t want to do it at first, but then we talked about it for days afterwards,” Rick said of his family’s experience in the Nashville escape room.

Back in Emmitsburg, he and his wife started talking about opening one. They decided on Gettysburg because of its nearness to their home, its large number of tourists, and its limited indoor entertainment offerings.

They rented the old Department of Motor Vehicles space at 59 N. Fifth Street in Gettysburg, and opened with two escape rooms in March. By summer, they should have four rooms open.

For those unfamiliar with escape rooms, a group of people are locked in a room that has been designed around a theme. The group that I was part of was locked in a room called the Mad Hatter’s Tea Parlor. It was a Victorian room with a fireplace, furniture, unusual pictures, and odd clocks. We had one hour to find and decipher clues and to work our way through a series of surprises, in a race against time. The pressure to find a way to unlock the door builds as the time we had to free ourselves vanished.

However, my group also laughed, got frustrated, and cheered when we solved a tough clue. When the locked door finally popped open, with less than ten minutes to spare, everyone felt a great sense of success and accomplishment.

The other rooms include: the wizard’s chamber, where you must unravel the clues to escape the room before the head wizard returns; and museum heist, where the group is attempting to steal the Gettysburg Address from a museum before the police arrive. You are given an hour to escape the room, and not every team is successful.

“Our rooms tend to be more challenging than some of the escape rooms that are part of a chain,” Rick said.

The rooms are designed to hold eight to ten people, although larger groups can be accommodated. Participants should be at least thirteen years old to be able to fully participate in the adventure.

“We’ve already had some return customers. We had one group come in for a birthday party, and they had so much fun, they came back the next weekend to do the other room!”

Escape Rooms are great family activities, but businesses also use them as a team-building exercise.

Escape Gettysburg is a family-run business. Even the Oleszczuk children—Noah, Ella, and Eva—participate in the business. They either act as greeters or game masters. Game masters monitor the progress of the trapped people, and may give them hints from time to time about how to escape.