By TheCatoctinBanner.com On June 28, 2019 · Add Comment · In Community News

Mr. Smith hopes his efforts find favor with all of Maryland’s citizens.

Doughboy Statue to be Back by Mid-March 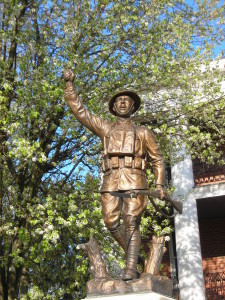 Emmitsburg’s World War I Doughboy statue should be back on its pedestal by mid-March, according to Emmitsburg Mayor Donald Briggs.

The statue, which was erected in 1927 to honor the town’s WWI Veterans, was damaged on June 17, 2015, when a car hit the pedestal. The pedestal was damaged and the statue suffered minor damage. Repairs were slowed at first, because the historic nature of the statue required a specialized company to perform the repairs that was approved by the State of Maryland.

“It took two seconds to knock that thing out and six to seven months to get it back,” said Briggs.

The slow process irritated many residents, particularly Veterans, who did not understand why it was taking so long.

Their ire was further inflamed when some officials and residents began talking about replacing the plaque on the statue’s pedestal to integrate the names of the African-American Veterans into the list of Caucasian Veterans. The names are currently segregated.

The commissioners had heard from residents and Veterans previously about whether the current plaque should be replaced with a new one. The response to that idea was very negative, with even descendants of some of the African-American Veterans speaking out against it.

On February 1, 2016, Commissioner Glenn Blanchard presented some ideas—for discussion only—about adding a second plaque that explained why the names were segregated, a second plaque noting the statue’s rededication with some reference to the segregated names, or interpretative signage in town that explained the statue and Emmitsburg’s role in WWI.

“This is an opportunity to get involved with the centennial of WWI to explain the role of Emmitsburg in WWI,” Blanchard said.

Fred Wood, representing American Legion No. 121, and Gene Lingg, representing VFW No. 5568, both spoke at the meeting, saying they did not see a need for a second plaque. Both also pointed out that while African-American Veteran names would not be segregated today, the statue is historic and that was typical for the time. However, today, that segregation of names can be seen as a “badge of honor,” according to Lingg. Both he and Wood said that it shows that there were African-Americans in Emmitsburg who believed that the country was worth fighting for and did so despite the segregation of the time.

Both men were interested in hearing more about the interpretive signage, and asked that the Veterans groups be included in the discussions.

What is a “doughboy”?

Although the U.S. soldiers of WWI are the ones most commonly given the nickname “doughboy,” it has been used since the Mexican-American War (1846-1848) to identify soldiers. It was even used at the beginning of WWII. The name has also been applied to British troops.

The name “doughboy” itself has applied to fried dumplings that were an early version of doughnuts and a baker’s apprentice. It was also used interchangeably with “doughhead,” a colloquialism for stupidity.

The name first appeared in reference to soldiers during the Mexican-American War. No explanation was ever given as to why the nickname was used, but a number of theories have been advanced over the years. While some are feasible, none have proof to support them.