By TheCatoctinBanner.com On September 26, 2019 · Add Comment · In Community News

Elower-Sicilia Productions (ESP) ESP dancers are back for a new dance year and are excited to dance for their community! The dancers loved dancing at the Community Show, as well as the Thurmont Art & Wine Stroll! They will also perform at Colorfest in the Thurmont town park on both Saturday and Sunday at noon. While ESP is celebrating its 50th anniversary, the ESP Performing Company has been working hard at brand new choreography for a new year. ESP is so lucky to have such a great group of dancers, who love to express their love for dance through their performances. ESP Performing Company has a couple of events coming up in the near future that we would like to invite you to attend!

ESP would like to invite all to come and participate in the 9th Annual ESP 5k “Superheroes On The Run Fighting through Breast Cancer” on October 26, 2019. We are again proud to use this event to honor our dear ESP friend who lost her battle with breast cancer in 2010. Pamela Gray Hobbs was a dancer, teacher, and parent affiliated with ESP for over 20 years. She remains in our hearts. In memory of Pam, a portion of the proceeds from this event will be donated to help support Maggie Kudirka, aka “The Bald Ballerina.”  Maggie is a Maryland native who was diagnosed with stage 4 breast cancer at the age of 23, while she was dancing with the Joffrey Ballet Company in New York.  Maggie has been a strong advocate for breast cancer awareness.  The money raised will help with the cost of Maggie’s increasingly large medical bills, as she has already received 85 maintenance treatments.

We always like to have a little fun with this event! So besides running a beautiful course lined with dancers cheering you on, this year we will be holding a contest for the most creative, most powerful and the cutest costumes! Runners and volunteers will be entered into this contest and the winners will receive a prize. Please register at ESP Dance Studio @ 15 Water St. Thurmont or you can register on Active: https://bit.ly/2m1ZaYt.

The ESP Performing Company would like to extend a special “thank you” to the Thurmont community, The Catoctin Banner, and to The Frederick Arts Council for all of their continued support. 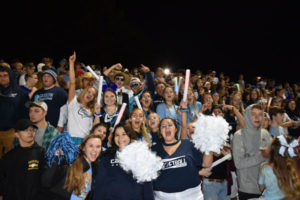 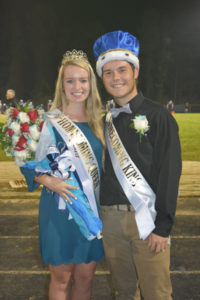 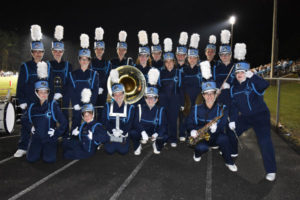 Looking for All CHS Cougar Football and Cheerleading Alumni

By TheCatoctinBanner.com On September 26, 2018 · Add Comment · In Sports News

In honor of the 50th anniversary of Catoctin High School (CHS), the football and cheerleading teams are pleased to announce that at the October 26, 2018, game, they will be inviting their past players and members to walk out at half-time and be recognized by graduation year as honored alumni of CHS programs. They are excited to invite the community to join in the celebration of the school’s sports history, as well as watching this year’s Cougars beat Clear Spring on their march to playoffs 2018. Go, Cougars! 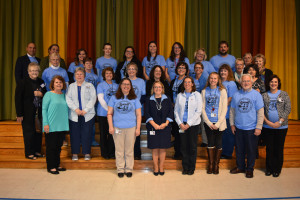 Throughout its fifty year history, teachers at Sabillasville Elementary School (SES) have shared sound knowledge with its children to give them a solid foundation; administrators have shown its children, by example, how to be honorable citizens and friends; community members have cared for the children by offering support and showing up when they’ve been needed.

November 18, 2015 was the 50th anniversary celebration of Sabillasville Elementary School at its “new” location (for the past fifty years) at 16210-B Sabillasville Road in Sabillasville.

Words learned as a student at SES make up this article. They convey heart-felt appreciation for being one of the lucky ones who was taught in this place. Learning at SES is warm and fuzzy, yet worldly and adventurous. Memories of learning here make one humble and so appreciative!

Grand people have attended SES. They live all over the world, around the corner, and across the street. They’ve achieved honor and impacted others. They’ve done for others as the teachers, administrators, and community at SES did for them. During the celebrations, some of these people traveled through the halls of the school and the media center where class photos and memorabilia were displayed.

The night’s ceremony started with a welcome from SES Principal, Kate Krietz. The Camp David Color Guard gave the Presentation of the Flags, just like they did at the twenty-five year anniversary celebration of the school.

Kate Krietz recalled that Joan Fry, a current volunteer at the school, had delivered a cake for the teachers on the first day the school was open to students in 1965. Ms. Fry was in attendance at the ceremony, and has written about the history of SES and former Sabillasville schools. Her three children attended SES.

SES students sang for the audience. “The National Anthem” was sung by McKenna Gisriel; Charlie McGinnis crooned “I Love the Mountains,” and students in the Cougar chorus roared the Sabillasville School Song and “My Town, My World.”

Time capsules, one for the twenty-five year celebration, one for the forty year celebration, and now one for the fifty year celebration, were available to view. The fifty year capsule includes special items from each class: kindergarten students made a book called “When we grow up” in which each student wrote about what they want to be when they grow up; first graders took selfies then paired the photo with a drawing of what they think they will look like when they graduate high school; second grade students created an All About Me activity; third grade students made a booklet with all of the reasons why they love SES with pictures; fourth grade students filled in the sentence, “When I think of Sabillasville, I think that…” with their thoughts; fifth grade students shared their favorite memory at SES. The time capsules were buried the following school day.

Jennifer Mullinex, President of the Sabillasville Elementary Parent Group, introduced special guests. Mark Pritts represented the Frederick County Board of Education for the evening. He was a new teacher in 1984 and 1985, assigned to SES. He remembered some people at SES whom he said, “…helped raise me to get started in my career” as a teacher. He remembered SES teachers Mrs. Buzzell, Mrs. Lingg, and Mrs. Dinterman, long-time secretary Mrs. Shirley Brown, cafeteria cook Mrs. Millie Eyler, and custodian Mr. Jack Miller. He expressed that he was very much supported by the staff and the community.

The next guest speaker, Brenda Main, is an SES alumna, who now works with the Frederick County Public Schools Transportation Department. She reminisced that she had Mrs. Summers in first grade, Mrs. Glover in second grade, Mrs. Tucker in third grade, and Mrs. Hodge in fourth grade. She remembered Mr. Jack Miller who she said, “…was so much more than a custodian. He greeted us when we arrived and wished us a good evening when we went home. About Millie Eyler in the cafeteria, she said, “She made the best darn pigs-in-the-blankets ever!”

Brenda started her bus driving career driving bus #57 at SES. Some of the students she drove home now have children of their own attending the school. For the last nine years, Brenda has been a bus driver instructor and said she brings every new driver up to SES. She said, “This is God’s country. I tell them the history here. Most people don’t realize the school is here. I teach them to drive these roads.”

Karen Locke, a former principal at SES stated, “Sabillasville Elementary School is Frederick County’s best public private school. This is the model that all schools should be made from. The personal touch, small class sizes, and dedicated community where the school is the heart. You’ve gotta love…this…school! Be proud that you went to Sabillasville.”

Special thanks to members of the 50th Anniversary Planning Committee for their coordination of the celebration; to the Sabillasville Elementary Parent Group for their support; to Pastor Bob Kells of Weller Methodist Church in Thurmont for his delivery of the Invocation; and to Reverend Mike Simane of St. Mark’s Lutheran Church and St. John’s UCC in Sabillasville for his prayer and benediction. 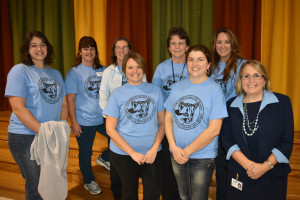 Sabillasville Elementary School’s 50th Anniversary will be honored during the opening ceremonies of the Thurmont and Emmitsburg Community Show on Friday, September 11, beginning at 7:00 p.m., in the auditorium at Catoctin High School. The school’s staff, faculty, and students are encouraged to attend. It is hoped that a record crowd attends so that many fond memories can be remembered, and former classmates can reunite.

Save the Date: The Sabillasville Elementary School PTO will host a 50th Anniversary Celebration on Wednesday, November 18, 2015, at the school. During school, students will celebrate from 1:00-2:00 p.m. in the auditorium; a community celebration will begin at 6:00 p.m. with Alumni Meet-Up, followed by a celebration at 7:00 p.m. Visit www.education.fcps.org/ses for more information.