Vanessa (Maccabee) Niemann, professionally known as “Gal Holiday,” came to live in the Catoctin Mountains with her family when she was eleven, and made many friends throughout the county at church and at school. As fate would have it, she left here as soon as she could and began a long journey musically that finally ended up in New Orleans, where she formed a Honky Tonk band called Gal Holiday and the Honky Tonk Revue.

Armed with powerhouse vocals and serious songwriting with bass player and music director, David Brouillette, Vanessa and Dave have made Gal Holiday and the Honky Tonk Revue a vehicle to keep country dancehall culture alive, while paying homage to classic honky tonk greats such as Hank Williams, Connie Smith, and Webb Pierce.

They perform in New Orleans regularly at popular hot spots. In November, she took a long journey back home by van to begin an East Coast tour with her band. She packed the Ott House in Emmitsburg on a normally quiet Thursday night with family, old friends, old fans, along with many new ones. After playing drums at the Ott House with the band, Ashley Maccabee—Vanessa’s “little  brother” as she affectionately calls him—continued to play with them for the rest of the tour. Gal Holiday and the Honkey Tonk Band will tour popular dance venues in Virginia, New York, and New England.

To hear the music “The Gal” and her band create is magical. Their energy and amazing talent, as well as Vanessa’s charisma and good looks, are the perfect formula for a great night, whether one just wants to listen or “dance baby, dance!”

As her mother, Christine Schoenemann Maccabee, said, “She makes a sad song happy.”

At the Ott House, there were smiles on every face, and the joy was palpable. It was indeed a great night for dancing, whether it was with the one you came with or with complete strangers.

Gal Holiday has shared stages and performed with many other talented musicians, including Willie Nelson, Lyle Lovett, Tim McGraw (Jazz Fest), Wayne Hancock, and other notorious crooners. After almost a decade, Gal Holiday continues to evolve through original compositions, which dominate their most recent release, “Last to Leave.” This song was featured in a statewide advertising campaign for Louisiana Propane.

Gal Holiday and the Honky Tonk Band will not be a regular local act, but will likely come back once or twice a year, we hope. Visit www.galholiday.com for more information. 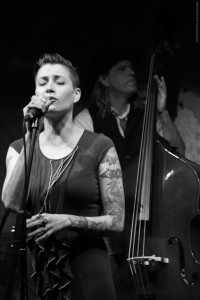 Vanessa Niemann is pictured performing, with her bass player and music director, David Brouillette, behind her.