Up & Out Foundation Takes On Addiction

By TheCatoctinBanner.com On September 29, 2016 · Add Comment · In Featured Articles

Deb Spalding
Korey Shorb of Emmitsburg has been “down and out.”As a former heroin addict, he was so far down that he lied to his family, stole from others, started dealing drugs, went to jail, and then to prison. He repeated those same shaming behaviors over and over again. It was a cycle during which he used, “Any drug you can think of — I shot it, smoked it, ate it. The first heroin high is the best; the addiction is when you keep trying to capture that high feeling, but after the first time, the high is lower. We are enslaved. You can never recapture that first high again.” He feels that heroin has changed in the past few years. People are bypassing weed and alcohol and going straight for the hard stuff, the stuff that will kill you quickly.

Korey has been drug-free for the past eight years. He got “up and out” of his addiction. “The opiate addiction problem is killing our communities,” he said. Therefore, in an effort to help others recover, and to possibly prevent addictive behavior, he started an organization he dubbed, The Up & Out Foundation.

About the organization, he said, “Originally it was to give money back to the Drug Courts Program out of Frederick. To people recovering, it’s a big deal to graduate from the program. It’s hard work to get through the program, but Drug Courts are designed for people like me. They need a reward. Not everybody has someone. It’s important to help.”
Funds generated from Up & Out’s Run for Recovery, paint nights, quarter auctions, and other events, help recovering addicts pay for resources that will help them. For example, when you’re down and out, the $400 or $500 admission fee to a Recovery House to begin recovery is hard to get; the $100 copay for the monthly Vivitrol shot that will render opiate effects useless is hard to pay. It shouldn’t be hard to find resources when recovery gets tough.

“Up & Out helps to get people off the habits that could kill them. Relapse does not have to be a part of recovery. There’s someone who can help you,” explained Korey.
Up & Out offers that lifeline for help. They’ll help navigate the resources, and help you gain access to different programs.

The Frederick County Health Department is a great resource. They can help with prevention, awareness, substance use, and mental health. They assess people and refer them where they feel is appropriate. They also have a recovery center in Emmitsburg, and one located in Frederick, which are great for people in recovery who may not choose to go to a twelve-step program.

Since its conception in 2014, Up & Out is growing because there’s a need. Melissa Wetzel, a CPA in Emmitsburg, helped to start the organization, and Korey paid out of his pocket to obtain the organization’s 501(c)3 non-profit designation.

Meanwhile, Korey started a much-needed job through the Fredrick County Health Department. He works with the Drug Court program and the Frederick County Parole & Probation Office.

“If you would have told me eight years ago that I’d be working in the probation office that I used to report to, and that my former probation officer would be working right across the hall from me, I would have said you’re crazy!” Korey added, “I suit up and let God do the rest. While I was in jail, my mom would write at the bottom of her letters: ‘Pray Korey, there’s power in prayer.’ I used to think prayer was a sign of weakness. I know today that prayer is where my strength comes from.”

Korey speaks about the mission of Up & Out. He’s spoken to high school students, to college students, to juvenile delinquency classes, clubs, and churches, and to the National Association of Drug Court Professionals. He found his niche in public speaking. “I know what it’s like to be in high school and feel different, and not be able to talk about it.”
The Youthful Offenders program through the Frederick County States Attorneys Office is a place where at-risk youth can get help. They can be referred to the program by a parent, an officer, a friend, or a family member, for help with any at-risk behavior.

“Everyone will have a different road to recovery,” Korey emphasized. He was stubborn. He needed consequences behind his actions. He feels that our society is babying addicts too much. “They have to sit in jail and use that time to think. My dad didn’t let me manipulate, and he made me accountable for my actions. My mom nearly loved me to death. She was borrowing money from friends and getting bank loans to ‘help’ me.”

Korey strongly advises family members to, “Let them sit in jail, don’t bail them out; don’t pick up the phone if you can’t say no. They can get help while they’re in jail.” The Fredrick County Detention Center has a designated block for substance-abuse treatment.

There is a science called Neuroplasticity. This is basically retraining a person’s thinking. You CAN teach an old dog new tricks. The process is very difficult because it’s uncomfortable. But, from Korey’s experience, it is spot-on for people getting clean and staying clean, by using coping skills when the craving comes to use opiates again. He’s not anti-medication, but he feels that medication does not fix addiction or alcoholism. “Medication is a symptom dampener. We still have to address the addiction. An addict thinks they’re going to get on some type of medication-assisted treatment, but not change the way they live. For me, not using drugs and alcohol was a very small piece of the puzzle. I had no clue, until I got sober, but then realized that I had to change the way that I live my life. Until we change our thinking, we will always recycle our experiences.”

In 2014, Sue Hood created a documentary that can be viewed on Vimeo and Youtube called “Running for Recovery.” The video is an educational tool for schools, churches, and recovery centers.

Eventually, Korey wants to open a recovery house, and he’d like to start a running club. For now, Up & Out is a way to give back to the community and help people. “Just because someone struggled with addiction or might have done time in jail, it doesn’t mean their life is over. If they get clean, their life is just beginning.” 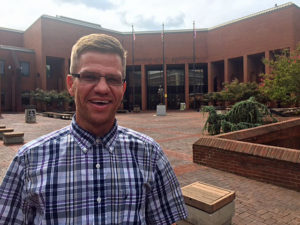 Korey Shorb, founder of Up & Out Foundation, is shown in front of the Frederick County Courthouse.