Thurmont’s Mother Clarke A Salute to One Who Loved Veterans

By TheCatoctinBanner.com On October 31, 2018 · Add Comment · In Featured Articles

Few people in the history of Frederick County, Maryland, can claim to have been a mother to thousands, yet Ambrosia Elizabeth “Rose” Derwart Clarke (who shall be called Rose) could. She was born in south Baltimore on August 4, 1895. Her father owned and operated a saloon and the convenience store next door on Hull Street. If she were alive today, she would be doing one of two things: donating blood or visiting sick and wounded service members in hospitals.

It isn’t certain why she became so devoted to servicemen, but the fact that her father’s two businesses catered to the sailors docked in Baltimore may have had some influence. On Christmas Day 1916, she married Charles H. “Jerry” Clarke, Sr., a route driver for Rice’s Bakery. Rose and Jerry met on an excursion boat named “LOUISE” in Tolchester, Maryland. A painting of “LOUISE” later hung on a wall in the front living room of their home.

After their marriage, Rose often accompanied her husband on his daily rounds from Baltimore, which included Northern Frederick County. The young couple later chose to make Thurmont their home. Rose gave birth to twenty-four children, twelve of whom lived. As the years passed, Jerry bought a candy store across from O’Toole’s Garage on the Old Emmitsburg Road (at that time) and quit his job at Rice’s. The store was turned into a beer saloon and sandwich shop. Jerry bought additional land and a seventeen-room, three-story house (Altamont and 550) up the road from the restaurant-beer saloon. Eventually, the entire saloon was completely transported up the main thoroughfare of U.S. 15 (now 550) to where Mountain Jerry’s came to permanently be (Liberty Gas Station is there now.).

One would think that raising twelve children and helping a husband run a business would be exhausting, but not for Rose. Her desire to help others was boundless. At the beginning of WWII, Rose and Jerry made sandwiches daily and took them to the soldiers who stood picket duty along the road. There were so many military convoys traveling the highway that guards were needed. This simple act of kindness on their part began a lifetime of devotion to Veterans and, eventually, earned Rose the title of “Mother Clarke” to thousands.

In 1942, Rose was the first woman in Frederick County to give blood for the war effort. When she signed up for the first donation, the newspaper noted that a woman from Thurmont, who had given birth to twenty-four children, was to donate blood and wished to remain anonymous. At age sixty, her doctor ordered her to stop giving blood; but, by that time, she had given fifty-one pints, a pint every two months from 1942 to 1955. Also, in 1942, she began to visit wounded servicemen in three military hospitals. She once said, “Arthritis hasn’t stopped me. If God lets something happen to my feet, I still have my hands.” At age eighty-six, she said, “As long as God gives me health and strength, I’ll continue my work.”

For twenty years, she never had time to leave her hometown. In fact, she had never left her native state of Maryland. So, in 1947, The Thurmont Lions’ Club thought it was time for Mother Clarke to take a breather, and they provided a trip to California for her.

Jerry died in 1954, and although Rose was deeply grieved, she turned more and more of her energy towards the comfort of Veterans. When she was hospitalized in 1966 for surgery on an arthritic knee, she remarked, “When they would take me for physical therapy, there would be hundreds of our boys trying so hard to get used to their artificial arms and legs; oh, how my heart ached for them. That’s why we must keep their morale up, make their hospital stay a little more cheerful, and show them we won’t forget them.”

She was a friend to all servicemen, and during the war won their respect and admiration for the many little favors she did for them. Her home was a “home away from home” for the servicemen, contributing much to their morale. When the war ended, she continued this service, begging and borrowing to carry on this personal service for her “boys in uniform.”

She made frequent visits to numerous hospitals and sought small gifts from retailers in both Frederick and Baltimore for “her boys.” Military leaders at every medical facility in Maryland wrote to thank her, and she was a guest on several national television programs, soliciting gifts that she donated to Veteran’s hospitals. At nearly eighty years of age, she was feted at the Thurmont American Legion, where tributes came in from around the country, including from many Veterans whose lives she had touched while they were hospitalized.  She was remembered for her many acts of kindness shown to the servicemen, and as the Vietnam war grew more intense, she was kept busy visiting the hospital wards and providing the Veterans with little pleasures that only a mother would consider. Her work, which she considered a mere pleasure, won her the respect and admiration of the entire community, as well as thousands of servicemen throughout the country.

In 1983, two years had passed since she had seen any of “her boys.” That year, she received a letter from President Ronald Reagan, thanking her for thirty-eight years of devotion to servicemen. This was not her first letter from a president. She also received notes from Presidents Kennedy, Johnson, Nixon, Ford, Carter, and Eisenhower, and was recognized by national publications such as Samaritan of the Year. She received citations from Francis Cardinal Spellman and Pope Pius XII, who also had an interest in servicemen.

None of that fame changed her personality. She was a simple country woman, proud to be Mother Clarke to men and women in uniform and preferred if she could remain anonymous. She was always a good mother to her children: Charles, Jr., Jerome, Kate, Mary, Ellie, Pat, Rose, Joe, Mike, Paul, Ronnie, and Francis (in no particular order). Their last child was born when Rose was forty-five and Jerry was sixty. Many in the community may have known one or more of them. (Special thanks to Mike for naming his siblings.)

Rose’s last public appearance was at the change of command at Fort Detrick in June 1985. She died April 22, 1987, at age ninety-one and was survived by ten of her children and forty-eight grandchildren. Her son, Paul, compiled a book entitled Memories of Mother Clarke, The Veteran’s Mother in 1985.  It may be viewed in the archives at the Thurmont Regional Library.

Note: Some information was excerpted from Gateway to the Mountains by George Wireman,  . . . All Our Yesterdays by John Ashbury, and The Veteran’s Mother by Paul Clarke, 1985. 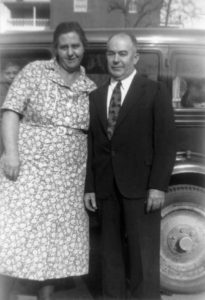