By TheCatoctinBanner.com On April 26, 2018 · Add Comment · In Featured Articles 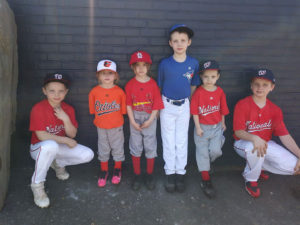 Warm weather and clear skies welcomed players, parents, and families to Thurmont Little League’s Opening Day on Saturday, April 14, 2018. With some games beginning as early as 8:30 a.m., everyone was eager to enjoy their first day on the field for the season. At 10:00 a.m., a few hundred people gathered around the main field waiting for the Opening Ceremony to begin.

“I’ll be honest, it’s my honor to support you all and support the kids…” said new president, Jeremy Johnson, as he graciously thanked all in attendance. He commended his volunteers, board of directors, team managers, coaches, team moms, umpires, concessions, and everything in between, for making Thurmont Little League so successful.

Catoctin Dental was recognized for being Thurmont’s Grand Slam Sponsor. This year, a new scoreboard was donated and will soon be placed on the minor league field, sponsored by J&J Trash Service. 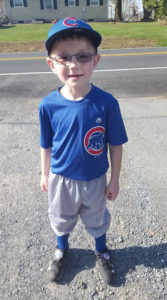 This year’s Intermediate Division will consist of two teams (11-13 year-old), with great talent and skills. Thurmont Lightning will be led by Joe Wehage and Thurmont Thunder will be led by Brent Reynolds.

As DJ Brian Mo led the Player’s and Parent/Volunteer Pledge, the crowd recited in sync, leading up to the first pitch, which makes every season officially baseball season in Thurmont. This year, the Clingerman family, who has been on the fields many times to play ball, lost their beloved brother, son, and uncle, Colton Clingerman. In his honor, Reed Clingerman thanked the Thurmont Little League for all of their support. “Thurmont Little League is the glue of the community. We all come together, we are all here.” Little brother, Asher Clingerman came forth to throw the first pitch.

Closing the ceremony, Aubrie Gadra volunteered her talents to sing the “National Anthem.” After a touching performance, families were dismissed to enjoy the rest of the beautiful day on the fields and to play ball.