The Mystery of the Masons and Their History

By TheCatoctinBanner.com On July 1, 2015 · Add Comment · In Featured Articles, History

Freemasonry conjures up images of a secret society with hidden rituals and, thanks to the movie National Treasure, hidden treasure. Yet, the Masons are far from secret. They are men who work hard to find brotherhood, enlightenment, and truth.

When John Hagemann first came to Thurmont in 2006 and joined the Acacia Lodge No. 155 of the Ancient Free and Accepted Masons, another Mason pointed to a long row of 8×10 photographs hung on the wall of the Masons’ lodge social hall in Thurmont. They were the Worshipful Masters (lodge presidents) of the Acacia Lodge, and Hagemann recognized many of the last names as members of long-time Thurmont families.

“I was told that if I worked hard, one day my picture could be up there, and it is,” Hagemann said. He is the current Worshipful Master of the Acacia Lodge #155 in Thurmont.

The Masons came to Maryland in 1750, not in Baltimore, which was the largest population center at the time, but in Leonardtown. They weren’t established in what is now Frederick County until just before the Revolutionary War. Not much is known of the early lodges in the county. The largest lodge was called Hiram Lodge, and there was a lodge that served the army during the War of Independence. Those two lodges, along with other small lodges, combined to form the Columbia Lodge in 1815.

“The Masons met in a home at the corner of Market and Second Street,” said Kenneth Wyvill, Grand Master of the Maryland Masons. This combined lodge was enough to meet the needs of the county Masons for sixty-six years. “As population centers grew and shifted, Masons would decide to form new lodges,” said Wyvill.

The first lodge to break off from the Columbia Lodge in Frederick was Acacia Lodge No. 155 of Mechanicstown (now Thurmont). In all, six new lodges formed in Frederick County between 1871 and 1906.

Thirteen Masons in the area formed the lodge in Mechanicstown, with Robert Lyon as the first Worshipful Master (lodge president). The new lodge’s first meeting was held on May 22, 1871, in a room on the third floor of the John Rouzer apartment house, opposite the Lutheran Church on Church Street. Besides choosing officers, it was decided to name the lodge the Acacia Lodge.

The Acacia Lodge was examined by other Maryland Masons in October 1871 to see if its membership was proficient enough to support their own lodge and on November 21, 1871, the Acacia Lodge was granted its charter. “They first rented the International Order of Odd Fellows hall to meet in,” Hagemann said.

The Acacia Lodge continued to grow between 1872 and 1876; however, for the next two years, many of the members found themselves working away from Mechanicstown. “Membership dwindled and the Maryland Grand Lodge actually took back our charter, but the members still continued to pay dues,” Hagemann said.

The charter was revoked in 1879, but the local Masons still paid dues and worked to establish stability to their lodge. They applied for restoration of their charter in 1887 and it was granted on December 19.

One of the things that the members decided would help their stability was to own their building rather than continue to rent space. Beginning in 1894, the Masons under Worshipful Master Leonard Waesche began looking into buying the Bussard Building (where the lodge is currently located at 12 E. Main Street) and adding a third floor to it. “The lodge bought the building in 1898 and added the third floor to it for our lodge hall,” Hagemann said.

The Masons also made repairs to the first and second floors of the building and began renting out the space. Over the years, the first two floors have been a livery, doctor’s office, post office, grocery store, drug store, beauty parlor, and more.

When the lodge celebrated its first fifty years at the Thurmont Town Hall on November 29, 1921, only three of the original members were still living: George Stocksdale, Leonard Waesche, and David Martin.

“At the end of World War II, we had 156 members, which is the largest we’ve ever been,” Hagemann said. Of that number, 84 were veterans.

The last tenant for the second floor of the lodge left in 1960. The space remained vacant until 1962, when it was decided to use the floor as the lodge’s social hall, and it continues to be used for that purpose today.

Though generally believed to be a Christian group, Masons include many faiths. Each lodge has a book of faith on its central altar. The Acacia Lodge uses a Bible, but other lodges can include a book of faith for the predominant religion of the lodge. “It doesn’t matter what religion you are, you just have to believe in a higher power,” Hagemann said

The Acacia Lodge in Thurmont currently has 77 members, although Hagemann notes that like many civic and volunteer organizations, the average age among members seems to be rising as fewer young people become involved with organizations. The Acacia Lodge is one of 102 Maryland lodges and 15,000 Masons.

Emmitsburg also has a lodge, Tyrian Lodge #205. Ernie Gelwicks is the Grand Master of this lodge at the present time, a Past Master, a Grand Inspector for the Grand Lodge of Maryland, Sir Knight in the Knights Templar, and Noble in the Scottish Rite Shriners. The Emmitsburg Lodge was formed and met above Annans Store, later moved and merged with Acacia in Thurmont before being re-charted in 1906, they met after that above the Vigilant Hose Fire Co., then met in Taneytown until buying their present location. Many prominent Emmitsburg Leaders and businessmen founded Tyrian Lodge in Emmitsburg.

The Masons are involved in many civic activities and participate in parades and building dedications. They can be identified in full regalia that includes tuxedos, top hats, and aprons. The local Masons dedicated the cornerstone of the Thurmont Library and have contributed money to many local efforts, such as purchasing a new flag pole for the town and paying for the memorial stone for servicemen in Memorial Park.

“We also have an annual $1,000 scholarship that we award to a senior in the Catoctin High district,” Hagemann said.

Hundreds of Maryland Masons will be participating in a parade in Baltimore in full regalia for the re-dedication of the Washington Monument on July 4. The Masons laid the cornerstone for the original monument in 1815, and re-laid the stone in 1915.

“We’ll be using the implements from the time period of 1915 to rededicate the cornerstone,” Wyvill said.

Young people who are interested in becoming a Mason may join as members DeMolay for young men or JOBS Daughters for young ladies. Women join the Order of the Eastern Star. Ernie Gelwicks added, “The Knights Templar is another branch which many Master Masons also join, as is the Scottish Rite Shriners, which are responsible for Shriners Hospital fame and support this worthy cause.” For more information in our area’s Masonic membership, please call John Hagemann at 301-271-2711 or Ernie Gelwicks at 301-447-2923. 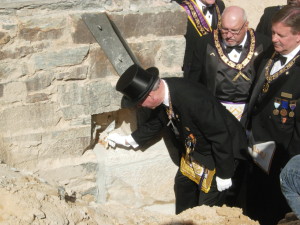 Members of Acacia Lodge #155 in Thurmont are shown dedicating the cornerstone of the Thurmont Regional Library. 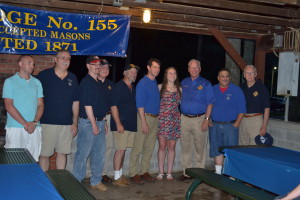