The History and Mystery of McAfee Falls

By TheCatoctinBanner.com On September 28, 2017 · Add Comment · In Featured Articles

The McAfee family (pronounced Mack-a-Fee), originally from the Island of Bute, Scotland, planted roots in Frederick County, Maryland, around 1774 from Franklin County, Pennsylvania, staking a homestead on land that is now known as Cunningham Falls. Daniel McAfee was the original settler of this land, and transferred the ownership to his son, David McAfee, in 1799. According to Professor John Means in the 1995 printing of his book, Maryland’s Catoctin Mountain Parks, “‘Cunningham Falls’ and 350 acres surrounding it were purchased on September 16, 1807, by Archibald McAfee, Sr. The McAfee family lived near the top of the falls, and the original foundation of the homestead still stands. The family owned the land until it was acquired by the Federal government in 1935.”

The purchase of the land by the Federal government was part of President Franklin Delano Roosevelt’s “New Deal,” where workers with the Works Progress Administration and Civilian Conservation Corps transformed the area for recreational use. This area was, according to Thurmont’s late Official Historian, George W. Wireman III, “…one of 33 nation-wide federal demonstrations of submarginal land for public recreation.”

Wireman wrote in his book, Gateway to the Mountains, “On September 15, 1888, Archibald McAfee’s widow had sale and the property including the Falls was purchased by her grandson Reuben McAfee, who maintained ownership until the property was acquired by the Federal Government in 1935, as part of the Catoctin Recreation Demonstration Area. Later the State of Maryland acquired an additional 250 acres of land from the McAfees. This made a total of 750 acres which the McAfees surrendered for park use. At one time they owned over 1,000 acres of mountain land.”

On July 15, 2017, today’s McAfee descendants held a reunion that ended with a photo session on the Falls that loosely replicated photos of their ancestors circa 1890.

Some may wonder why McAfee Falls is now called Cunningham Falls. After extensive research by many historians and genealogists, including hundreds of hours of research by the late Dr. Bowman of Garfield, Maryland, the reason for the name Cunningham remains a mystery. If you have insight, please e-mail news@thecatoctinbanner.com to share.

Robert McAfee of Foxville recently mentioned, “My grandmother, Rose Ann, always called the Falls Hunting Creek Falls.” In his book, Professor Means printed, “The Falls were never owned by anyone named Cunningham and were known as McAfee Falls until the 1940s or the early 1950s.”

In our research, the earliest reference to the Falls as “Cunningham Falls” appears in a May 20, 1920, Catoctin Clarion article, where there is a reference to a group having lunch at “Cunningham Falls, several miles west of town.” Just one year prior, on May 8, 1919, the Falls were referred to as “McAfee Falls” in the same publication. This is contradictory to Professor John Means’ research.

Of course, there is plenty of speculation about the justification in re-naming the Falls. The most sited is that “Cunningham” was a local photographer; though, this is not confirmed nor dated. Other theories include the possibility that Cunningham was a little-known politician at the time the government took ownership. If the Catoctin Clarion was correct in 1920, this theory is not plausible.

In his book Gateway to the Mountains, Thurmont’s official historian, the late George W. Wireman, wrote, “Many people have been under the impression that Cunningham Falls was named after an early owner, but this is not true. Dr. Harry D. Bowman, a friend of the author, has spent many hours of research on this subject, and it is now an established fact that at no time was the falls owned by Cunningham. Records to support this claim may be found in the land records of Frederick County. The first purchase of the land, which included the falls, consisted of 350 acres and was deeded to Archibald McAfee, Sr. on September 16, 1807. A map in the Frederick Library, dated 1858, clearly shows that the McAfees lived at the top of the falls and the property was owned by John McAfee at this time. The McAfees referred to the falls as Hunting Creek Falls but all others called it McAfee Falls, after the owners.”

Regardless of the name, the seventy-eight-foot waterfall, located four miles west of Thurmont on Route #77, is a destination for thousands of visitors that want to see the largest cascading waterfall in Maryland. 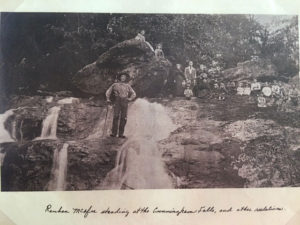 Reuben McAfee, grandson of Archibald McAfee, stands at the top of “McAfee Falls”. The original foundation of the McAfee homestead still stands, not far from this site. 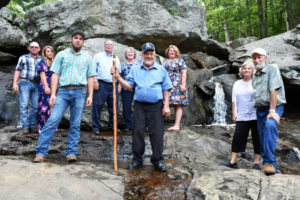 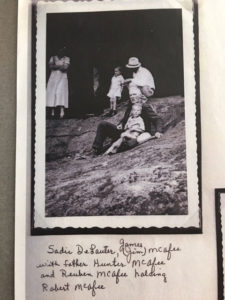 McAfee family patriarchs James and Robert are shown as youngsters in this photo. Their Dad Robert Hunter McAfee is in the white hat.
Young Robert is sitting on his grandfather Reuben’s lap.
James is in the background in white.  Their Aunt Sadie Delauter is also shown. 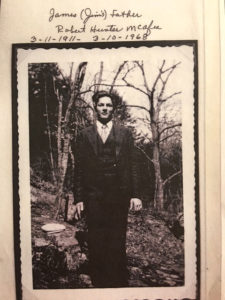 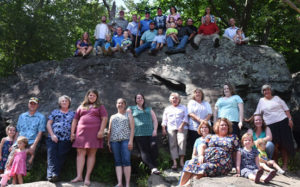 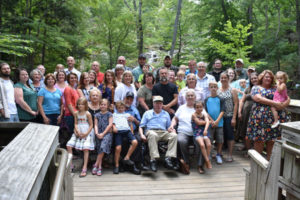