By TheCatoctinBanner.com On October 28, 2022 · Add Comment · In Community News

U.S. Marine Corps Reserve Toys for Tots program is 75 years old this year, and Cub Scout Pack 270 and Venturing Crew 270 are proud to continue their partnership with them in collecting new unwrapped toys for kids in Frederick County.

By TheCatoctinBanner.com On October 28, 2022 · Add Comment · In Community News

November 12 is the BSA Scouts National Annual Scouting for Food program, and Cub Scout Pack 270, BSA Scouts Troop 270B & G, and Venturing Crew 270 will be participating.

On November 5, the Scouts will be putting bags on household doors. These bags make it easier for community members to donate needed items for the local food bank.

Please take time to fill the bags and leave them on your porch on November 12, and the Scouts will come by and pick them up.

All donated items will be delivered to the Thurmont Food Bank.

By TheCatoctinBanner.com On August 31, 2022 · Add Comment · In Community News

Venturing Crew 270 went to Flight 93 National Memorial Park in Pennsylvania. Taking the tour and talking to the Park Rangers, Crew members learned about the day the world changed. How the crash impacted the local area and the Nation as a whole. They learned how the Memorial was built on symbolism of the day, the memories of the 40 victims of flight 93, and the area of the crash site.

What is Venturing? Go to www.thurmontscouting.org for more information on Crew 270.

The American Legion Post 168 held its annual Memorial Day Ceremony on May 30, featuring special music, speakers, and the laying of the wreaths to remember the conflicts/wars where so many men and women gave their lives to ensure the freedoms we live with every day.

Volunteers placed flags in 14 cemeteries in our local area. The American Legion Post 168 is not notified when a Veteran is placed in one of the cemeteries. Please contact veteranrecognitionpost168md@gmail.com to let them know about your family Veteran.

By TheCatoctinBanner.com On July 29, 2021 · Add Comment · In Community News

Scouting is strong in Thurmont! Scouts BSA Troop 270B, Venturing Crew 270, and Cub Scout Pack 270 were awarded Unit of the Year awards in their perspective divisions for the FSK District, NCAC Council.

This is the first time all the 270 units have received this award together.  This award is based on several different categories and is an achievement to earn.

The 270 units work together as a team to ensure each Scout gets the best Scouting experience possible. This award would not be possible without the outstanding volunteer leadership.

Interested in being a member of one of these amazing units? Go to www.thurmontscouting.org to find out more information.

BSA Troop 270B, Cub Scout Pack 270, and Venturing Crew 270 for the first time all receive Unit of the Year awards together.

By TheCatoctinBanner.com On July 29, 2021 · Add Comment · In Community News

Scouting troops in Thurmont honored our fallen military this past Memorial Day by placing flags on their gravesites and participating in The American Legion Post 168 annual wreath-laying ceremony on Memorial Day.

Thank you to Scouts BSA Troop 270B & G, Cub Scout Pack 270, Venturing Crew 270, and Girl Scout Troop 81178 for honoring our military so that they are not forgotten.

Members of Company 30, also known as the Thurmont Community Ambulance Service, Inc., held their annual awards banquet on January 21, 2017. This banquet was the first event held in their new event facility on Lawyer’s Lane in Thurmont.

Company President Lowman Keeney served as the master of ceremonies during the banquet. The banquet meal was catered by approximately fifty members of the Rocky Ridge 4-H Club and their parents.

Lowman Keeney expressed appreciation to all involved with the progress made by the company throughout 2016, including the demand of the construction of the new facility, and, in spite of that demand, members staying up-to-date on training and conducting the primary day-to-day operations of the busy company. (See article on page 1 about the new event facility for more information about the building.) The building took two and a half tough years to build. “It was a tremendous undertaking. Thank you to all the members,” said Keeney.

Company 30’s secretary, Joyce Stitely, worked diligently over the course of a full year, from February 2016 to January 2017, to make 300 hand-made baskets to commemorate the opening of the new Thurmont Ambulance Company Event Complex. The sight of the baskets lined up for distribution at the banquet was worthy of appreciation and awe. Each attendee was able to exit the event with one in hand, as a commemorative gift.

Lowman introduced the recipient of the President’s Award, James Wolf, stating, “He’ll do anything in the world for you.”

Chief Dennis “DJ” Ott reviewed that Company 30 responded to 1,258 calls for the year 2016. “We’re busy. We run a lot of calls.” He reviewed that, in addition, members participate in, and conduct, a lot of training. They had just sent two ambulances to Washington D.C., and had helped prior to that with the Marine Corp Marathon. He reviewed that an ambulance was purchased by Company 30 in 2016. It cost $271,000, empty, before adding top-of-the-line equipment. He said, “We had a good year, but we can absolutely do better.” He thanked the Town of Thurmont employees and police for their support.

Chief Ott presented the Chief’s Award to Judy White. About her, he said, “Without this person, we wouldn’t be sitting in this building. She stops what she’s doing at any time to help.”

Incoming officers were sworn in by the president of the Maryland State Firemen’s Association, Mike Davis. He said, “The camaraderie found in this community shows what it used to be about for other communities (that have since grown large and lost the small-town closeness). We’ve wained from that, especially when we have to have 350 hours to be an EMT.” He assured, “I am behind you.” 2017 Company officers include: President Lowman Keeney, Vice-President Bob Lookingbill; Secretary Joyce Stitely; Assistant Secretary Shirley Stackhouse; Treasurer Judy White; Assistant Treasurer Dennis Ott, Sr.; and Board of Directors, Glenn Muth, Jim Wolf, Tim Wiltrout, and Dave Place. Operational Officers include: Chief D.J. Ott; Assistant Chief Rose Latini; Lieutenants, Brooke Kennedy and Renea Coolidge; and Sergeant Jen Frushour.

The invocation and memorial for active member, Franklin Lee Shriner, who passed recently, was given by Pastor Ben Hays of Life and Liberty Baptist Church in Walkersville.

Company 30’s Secretary, Joyce Stitely, made 300 baskets by hand to commemorate the opening of the Thurmont Ambulance Company’s Event Facility. A basket was given to each banquet attendee as a gift.

Boy Scout Troop 168, Venturing Crew 270, Boy Scout Troop 270, Cub Scout Pack 270, Girl Scout Troop 81200, and the Gettysburg Young Marines received the Post Commander’s distinguished service certificate from AMVETS Post 7 and a certificate of appreciation from the American legion Post 168 for their participation in CPL Ferrell’s memorial service. Not only did the Scouts perform an outstanding flag ceremony, they were a key component in setting up, serving food, and cleaning up after the ceremony. 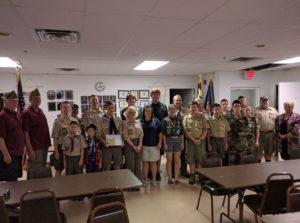 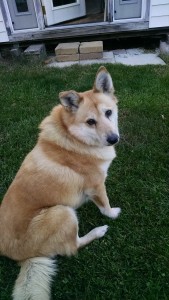 My name is Honshuu (pronounced hon shoe), which means “trouble” in Japanese. Why in Japanese? Because I am a Shiba Inu mix, one of six ancient dog breeds from Japan. We were bred for hunting and flushing out small game. Some say we have cat-like agility; I like to say I move like a ninja! Speaking of cats, we do get along well with them—they are fun to chase.

I am a talker, and I am sturdy, muscular, and confident. I need exercise every day. Many mistake us for foxes since our coloring and size are similar. We come in red (that’s me), black and tan, or sesame (red with black-tipped hairs), with a cream, buff, or gray undercoat.

We have a two-layer coat. The inner coat is thick and soft and the outer coat is coarse—short to medium length—naturally waterproof and naturally protects us from cold temperatures. We do shed, but I am naturally clean and groom myself like a cat. I know it sounds silly, but it’s in my DNA.

Our nature is to be independent, and we are reserved with strangers; but, once we get to know you and like you, we are loyal and affectionate.

I have to say that I am not a fan of other dogs, although I do have a few friends. I don’t possess the “pack” mentality that most dog breeds have; I am more of the loner type. My human family is my pack.

Enough about my genetics. Let’s talk about me. I was rescued when I was about six-eight months old, and have been the head of my household for eleven years now. I do a perimeter check every morning around my home, and can be found chasing rabbits and squirrels when they cross my path. I love to ride in the car, and I am an avid camper. I have been known to sleep in other people’s sleeping bags, so my mom got me my own.

I am a member of Boy Scout Troop 270 and Venturing Crew 270. You will find me at most camp outs and at many of their meetings. When we turn onto Elm Street in Thurmont, I get excited and can’t wait to get out and say hello to my fellow scouts.

I am a talker, although I wouldn’t say that I am obnoxiously barky, and I have been known to mutter under my breath when I disagree with a command, which is usually when I am begging and get caught. I do have to admit that I really aim to be the center of attention, and if I don’t think I am getting enough of it, I will definitely “tell” you all about it.

I have to run…I see a squirrel!