Everyone in the Thurmont Public Works Department believes in the importance of cooperation, teamwork, and flexibility. These standards ensure that the residents of Thurmont can depend on the department, which is headed by Superintendent Butch West, and consists of several divisions with seventeen full-time employees. I recently met with West and department heads: Water Superintendent Harold Lawson, Streets and Parks Supervisor Tim Eyler; Electric Supervisor Lee Hanvey; Wastewater Treatment Superintendent Randy Eyler; and Zoning and Utility Inspector Kelly Duty.

Teamwork is important.  Although each department has separate responsibilities and all employees perform individual duties, they are all willing to work together, especially during emergency situations. West said that if someone in town does not have water or electric, they stop what they are doing and get to it right away. Lawson would like residents to know that they try very hard to work on a maintenance schedule, but emergencies require that they respond immediately.

Flexibility is required when daily jobs are put on hold so that employees can work on special events. Almost any activity in town involves members of the department.  Colorfest is the event that requires the most staff, but employees are also essential during the carnival, parade, concerts in the park, Halloween in the Park, Christmas decorating, Fun Fest, and more.

Cooperation is apparent between Public Works Department employees, the town office staff, the elected town officials, the Police Department, and the residents.  The departments work together to help citizens of the community stay informed and keep safe.  Information is available on the town website, Facebook page, and channel 99. Emergency help is available around the clock by calling 301-271-7313.

The Water Department consists of Superintendent Lawson, along with employees Lynn Bass and David Stevens. They maintain and repair twenty-five miles of distribution system piping, as well as 2,500 residential and commercial water meters; they treat approximately half a million gallons of water a day from five wells and three treatment plants to ensure that the water meets state and federal drinking water regulations. Their goal is to provide residents with a safe and dependable supply of drinking water.

“There are people who travel for miles to come up and enjoy the Community Park. They bring their kids and let them play on the equipment. They say they are well maintained and that we are doing a good job,” said Tim Eyler.

According to Supervisor Hanvey, the job of the Electric Department is “to make sure the lights stay on.”  Hanvey, Garrett Ridenour, and Joe Lucas work as linemen, and Brad Weddle is the meter technician.  West said that Thurmont is one of the few municipalities to have their own electric company. The department serves approximately 6,000 residential and commercial customers. Jobs include reading meters, installing electric service, and trimming trees around power lines.

Superintendent Randy Eyler, Diana Willard, Troy Wastler, and Jeff Kilby work together to maintain the treatment plant, which has the capacity to treat one million gallons a day, as well as the collection system, which consists of about 2,700 taps. They make sure that all state and federal regulations are met, and do all paperwork and required lab testing in house.

Zoning and Utility Inspector Kelly Duty performs inspections, handles building permits, maintains records, and supervises contractors working with the Public Works Department. She is also the project manager for many of the special projects handled by the department.  Some of the recent projects include the Moser Road bridge near the library, the food bank parking lot, and the Eyler Road Park improvements.

Upcoming projects include the Trolley Trail paving and the Moser Road sidewalk project. 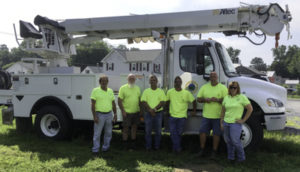