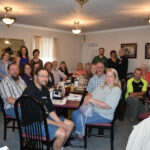 The Thurmont Business Network held its monthly gathering on May 2, 2019, at the Thurmont Kountry Kitchen on Water Street.

Thurmont’s Economic Development Director Vickie Grinder was the first to present. She reviewed that the second annual Restaurant Month in April was reported by restaurant owners as a success. She talked about the The Gateway publication that is produced by The Frederick News Post with content supplied by the Town. It has a 100,000 copy distribution and advertising costs are low. It is published twice a year in April and September.

Thurmont CAO Jim Humerick talked about some residential and commercial growth anticipated in the Town of Thurmont in the next two or three years. He suggested that if you feel strongly about the growth or lack of growth in the Town that you express that.

The reason for the name “Cunningham” being chosen as the name of the Catoctin Area’s local waterfalls, located west of Thurmont on Route 77, has become slightly clearer recently when following a reference from a May 2018 issue of The Frederick News-Post to an article from 1968.

Historically, the falls had been called Herman’s Falls (or Harmon’s Falls) and McAfee Falls after various land owners, and even Hunting Creek Falls after the stream that supplies water through the Falls.

Many locals still refer to the waterfalls as McAfee Falls, honoring the family who owned the falls at the time the federal government took ownership of the land in 1935 as part of Former President Franklin Delano Roosevelt’s New Deal, which sought to use the land for recreational use and provide much-needed jobs in response to the Great Depression.

The McAfees were early settlers from Bute, Scotland, in the mid-1770s. The name had been changed to Cunningham Falls after the transition of ownership of the land from the federal government to the State of Maryland. There is no clarity as to how the name Cunningham stuck since there have been obvious efforts and intent on record to keep the name McAfee Falls.

A May 23, 2018, Frederick News-Post’s “Yesterday” post from “50 Years Ago” references that, “A mistake of more than 30 years standing (as of May 23, 1968) was righted recently when Maryland’s Commission on Forests and Parks renamed the falls in Cunningham Falls State Park. The official name is now McAfee Falls, honoring an old Frederick County family which settled in the area in 1790. As a logical follow-up the Forests and Parks Commission is now considering renaming the park Hunting Creek State Park.”

There are several theories about how the name Cunningham came to be the modern name of the Falls, but none are backed by a substantial amount of fact. Today, on the internet, it is stated that the falls “was apparently named after a photographer from Pen Mar Park who frequently photographed the falls.” Research shows that there is no evidence of a photographer of Pen Mar Park or Cunningham Falls by the name of Cunningham.

In a previous edition of The Catoctin Banner, a grandson of the Falls’ owner at the time of federal acquisition, Reuben McAfee, Rob McAfee of Foxville informed us that a local woman believed there was a Cunningham family who lived near the falls.

Most recently, the Frederick News-Post’s “50 Years Ago” reference led us to that May 23, 1968, article in the News-Post titled, “Cunningham Park Falls Renamed ‘McAfee Falls.’” In this article, written by Jim Gilford, the name Cunningham is referenced to, “honor a Department of Interior employee.”

Researchers still have yet to uncover the truth behind the mystery, but regardless, thousands of visitors enjoy the falls every year, which is the state of Maryland’s largest cascading waterfall, standing at 78 feet.