By TheCatoctinBanner.com On November 26, 2015 · Add Comment · In Sports News 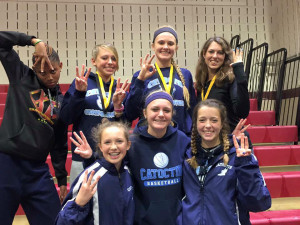 At states, the top five finishers for each school are assigned points based on their individual running times on the course. A team’s number six and seven runners’ scores are figured in the event of a tie. The team with the lowest amount of points wins.

Catoctin’s Cross Country Coach Terri Gibbons said, “It’s based on who the top five are—that day. If someone doesn’t have a good day, that counts against you.” She added, “At Hereford, we ran a three-mile course with big hills. It’s a very difficult course.”

Coach Gibbons is known for motivational team taglines. This season’s team motto, “Rankings mean nothing and race day means everything!” was proven true, as reflected in race-day results at Hereford.

Julien Webster ran seventh place overall, with a time of 20:02.84. She is a junior at Catoctin and was Catoctin’s number one finisher at this state competition. She ran the fastest time in CHS school history that any girl from Catoctin has ever run on the Hereford course.

Bella Kreiner earned thirteenth place overall, with a time of 20:29.11, a new personal record on the course. A senior and team captain, she ran as number two for Catoctin on Saturday.

Lillie Perella earned nineteenth place overall, and also ran a new course personal record, with a time of 20:41.13. She was the number three runner for Catoctin at Hereford.

Catoctin’s powerful top three: Julien, Bella, and Lillie, had a phenomenal season. Coach Gibbons said, “Often times, the three of them crossed the finish line before most teams’ number two runner! At the county championship they were third, sixth, and seventh.”

Rachel Waldron placed forty-third overall at state and ran number four for Catoctin, with a time of 22:12.31. She ran a new course personal record, beating her time at a meet on the same course in September by over two minutes.

“22:12 is an impressive time on this hard course. She shaved over two minutes in a month and half. That is extremely impressive,” said Coach Gibbons.

Sienna Caselle earned eighty-second place overall, with a time of 23:41.82, a new course personal record for her. She ran the number five spot for Catoctin at states, with her first run under twenty-four minutes at Hereford.

Courtney Orndorff placed ninetieth, with a time of 24:18.02, also a new course personal record. She was the number six runner for Catoctin at Hereford.

Seniors and team captains, Bella Kreiner and Maura Williams, gained and shared great work ethics as part of this team. About the team’s thoughts before the state meet, Bella said, “We felt pretty confident; we’ve been a strong team over the year. It’s all on attitude and the mental game… We encourage each other. We’ve been faster than we ever have before.”

Good luck to Julien Webster and Bella Kreiner, who will compete in New York at the Foot Locker Northeast Regional Cross Country Championship that takes place while this newspaper is at press. 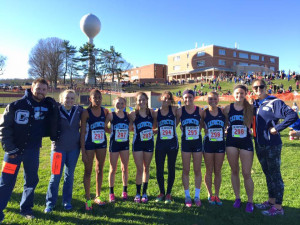