By TheCatoctinBanner.com On June 28, 2019 · Add Comment · In Community News

The State Highway Administration has begun overnight closings and detours on MD 77 (Foxville Road) to repair more than 40 aging culverts.

MD 77, between Pryor Road and Stottlemyer Road, will be closed Sunday nights through Friday mornings, from 7:00 p.m. through 6:00 a.m., until early fall, according to a State Highway Administration (SHA) news release.

The $2.1 million project is expected to be finished by summer 2020.

The road was previously closed for nearly a month in May for culvert work.

By TheCatoctinBanner.com On December 31, 2015 · Add Comment · In Community News

A celebration for the completion of the Thurmont Downtown Revitalization Project was held on Thursday December 3, 2015, in the Thurmont Main Street Center on Water Street in Thurmont. Those who had a hand in any aspect of the new street lights or new sidewalks in Thurmont were invited to attend and celebrate a job well done.

With welcoming remarks and gracious thanks to all involved, Thurmont Mayor John Kinnaird said, “I personally thank everyone involved with the renovation of our sidewalks and street lights: our town staff, the state for helping us out with grants, the concrete company, Catoctin Lighting, and everyone who came together to give us a fantastic finished product. I appreciate it.” He added, “There’s one person that I want to thank most of all for this project, and that is Jim Humerick (Thurmont’s Chief Administrative Officer)…without Jim…we wouldn’t have the product we have right now.”

The actual work for the project began in July of 2014 after Grinder called the State Highway Administration to request a new cross walk at the Trolley Trail. Through this inquiry, they were surprised to learn that new sidewalks on East Main Street and West Main Street were soon to be installed by the State Highway Administration. It was going to happen within months. This plan included sidewalks from Lawyer Lane to Route 15.

Soon the town was also informed that the sidewalks on North Church Street were being redone as well, and the State Highway Administration was picking up the tab for everything.

Thurmont’s Board of Commissioners had been discussing new amenities and street lights in the downtown area for several years. They thought that the best time to install these was when the sidewalks were torn up from the sidewalk project. So, they met with Catoctin Lighting to review options for street lighting. They picked a light, but then had to figure out who was going to pay for it and what it was going to cost. The mayor’s repetitive answer was, “Our CAO will find a grant.” Humerick and Becky Long reached out to the Maryland Energy Administration and were approved for $26,800 for the project.

The Town’s Public Works crews worked closely with the concrete construction. They worked well with Romano Concrete Construction. Romano’s foreman Noel Alvarado said, “The town has been great to work for. We really enjoyed working in Thurmont.”

Humerick continued, “Since we replaced everything else, we even repainted the parking meters.” He noted, “Vickie Grinder (Thurmont’s Main Street Manager) got this all started. She made the initial phone call to John Gober. She got the grants for the new benches, trash cans, and bike racks.”

To this point, the State Highway had paid for seventy-five percent of the sidewalk revitalization. The remaining Water Street section was left out, with no funding at that point. The mayor and commissioners voted unanimously to go forward with the Water Street section. Again, the mayor said, “Get a grant.” Humerick and Becky Long went to work again. Within a short amount of time, a Community Development Block Grant through the Maryland State Department of Housing was secured in the amount of $125,000 for the Water Street renovations.

Jim Castle with the Maryland State Department of Housing and Community Development said, “The reason we fund Thurmont is because, number one, you apply for projects which are a need to your community, they’re a reasonable amount of money, and you do good work. Those are the grantees that we like to keep helping.”

Humerick wrapped up by offering a big thanks to the residents and businesses in Thurmont. The vast majority were very tolerant and positive through the whole project. “We apologize for any inconvenience, but look at what we’ve got now! The results are wonderful.” 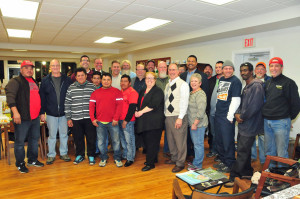 Those involved with the Thurmont Downtown Revitalization Project are pictured during a celebration held in the  Thurmont Main Street Center on December 3, 2015.