Twenty-one year old Corporal William Ferrell—Kyle to those close to him—was known for doing good things for others. While serving with a Marine Corps security force, he helped stranded motorists along Route #15 in northern Frederick County, Maryland, on more than one occasion. He was known to use his free time to do good deeds.

Around 10:50 p.m. on the evening of Tuesday, September 29, 2015, while helping a stranded motorist in the northbound lane, approaching Catoctin Furnace in Thurmont, he was hit and killed by a driver of a dark heavy-duty truck that is said to have been carrying two cars on a car carrier. The weather was dark and miserable, with a downpour of rain. It was a difficult night to be driving.

The driver of the hit-and-run vehicle has not yet been caught, and should have significant damage to the right side of the dark-colored, heavy-duty vehicle. It is hoped that someone notices the truck, with a double axle on the back and front-end damage. Please turn this person in. There is also a reward out. Call Metro Crime Stoppers at 1-866-7LOCKUP or text CRIMES (274637), or you can submit a tip online at www.metrocrimestoppers.org. You may also call local law enforcement at 301-600-4151. Your information will be kept confidential.

“Cpl. Ferrell’s last stop before being hit along Route #15 was to have dinner at The Furnace Bar and Grill. It seemed fitting that a tribute in his honor be held there,” said a Marine in a leather jacket, named Tony. Tony is a member of the Hagerstown Chapter of the Leathernecks Motorcycle Club, Intl., Inc., a motorcycle club made up of active-duty and former Marines. These folks put together a fundraiser to honor Cpl. Ferrell at The Furnace on October 23, 2015.

Leathernecks, members of Cpl. Ferrell’s unit, and others, gathered to pay tribute to a man loved by his community and friends. Funds raised will be used toward the purchase of a traffic light in Cpl. Ferrell’s honor for the Carthage Fire and Rescue Company in North Carolina, where Ferrell volunteered. Additional donations can be made online at gofundme.com/u25g6ak8.

“Someone knows where the perpetrator is. The damage I saw on Cpl. Ferrell’s truck—someone’s seen it, but doesn’t know they saw it. We are going to catch this guy,” stated Tony.

Locally, residents in the Catoctin area extend sincere condolences to Cpl. Ferrell’s family and unit. We are outraged that someone would hit, kill, and run away. The tragedy of the accident is amplified due to the fact that Cpl. Ferrell served our country, his home community, and ours.

Let’s keep our eyes open, tell our friends, tell our social media contacts, and when you’re somewhere that might have surveillance video that may have recorded this vehicle on the run—ask to take a look. Please help spread the word. 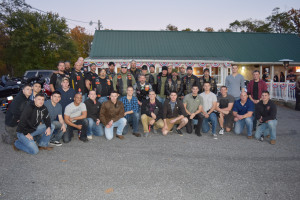 Members of the Leathernecks Motorcycle Club, members of Cpl. Ferrell’s unit, and others, gathered on October 23, 2015, at The Furnace Bar and Grill in Thurmont to pay tribute to a man loved by his community and friends.