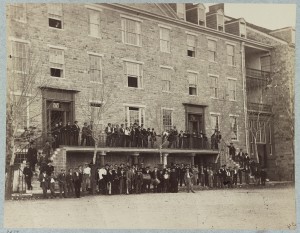 In the years leading up to the Civil War, Mount St. Mary’s enjoyed prosperity. The college celebrated its golden anniversary in 1858, and student enrollment was around 200 young men and growing.

“The Mount was thriving, as was most of the South thriving before the Civil War,” Father Michael Roach, instructor of church history at the Mount, said on the DVD “Mount St. Mary’s University: The Spirit Continues…”

This changed with the outbreak of war in 1860; the school began to lose students and faculty who were sympathetic to the southern cause. More than half of the students prior to the war came from the South. Not all of them headed home, and the school wound up supporting them because funds from the students’ parents could not make it north.

The college expenses increased while income fell off. During the 1859-1860 school year, Mount St. Mary’s had 173 students, not including the seminarians; two years later, the enrollment had fallen to 67 students, its lowest number in fifty years.

The remaining students and faculty began to take sides in the conflict, either pro-Union or pro-Confederacy. While this created some tension on campus, it never became open hostility. The consensus opinion seems to be that a majority of the campus supported the Southern cause.

“[President John] McCaffrey eventually, and some of professors, were monitored, observed, by President Lincoln’s loyalty police. These were men appointed all over the country to keep an eye on folks who might be or were suspected of being Confederate sympathizers,” Steve Whitman, associate professor of history at the Mount, said on the DVD “Mount St. Mary’s University: The Spirit Continues…”

Though Confederate in his sympathies, McCaffrey was not hostile to the Union. A Pennsylvania officer wrote, “Two miles from Emmitsburg, we passed Mount Saint Mary’s, and taking advantage of a moment’s halt, a party of three or four rode up to the main entrance…We were cordially received by the president and with characteristic hospitality a collation was in preparation for us.”

In the fall of 1862, the sounds of battle during the Battle of South Mountain could be heard at the college.

“As we were going up to Mass to the old church on the hill, and as we were returning from Mass, we could hear the firing distinctly. Yet, recreation went on the terraces and the ordinary routine of college life was followed, as if nothing unusual was happening,” Monsignor James T. Dunn, an 1863 Mount graduate, wrote after the war.

After the battle of Antietam in September 1862, six of the seven seniors remaining in the school slipped away to visit the battlefield, leaving only a note for McCaffrey that read: “Dear Doctor McCaffrey: We are very sorry for what we are going to do but we cannot help it. Please do not be worried about us: we will be back surely on Friday evening. Yours truly. Class of ‘63.”

This wasn’t the first time boys had left the campus without permission to see a battle or soldiers. McCaffrey decided to put an end to it. When the boys returned three days later, McCaffrey expelled them. However, within a month, he changed his mind and reinstated them.

Small Confederate raids occurred around the college and “Vice-President, Rev. John McCloskey, an excellent horseman and a notable figure on horseback, rode for quite a distance alongside the commander, General J. E. B. Stuart,” according to Dunn.

The next big event for the college was in 1863, as troops entered the area on their way to Gettysburg. “Many of us sat on the fences along the road watching and listening to their sayings. We naturally looked upon the men as sheep led to the slaughter, and we were not a little surprised when we overheard two of them closing a bargain on horseback with the remark: ‘Well, I will settle with you for this after the battle. Will that suit you?’ The other party readily assented. The whole period of life is treated as a certainty, even by men going into battle,” Dunn wrote.

He wrote that his commencement was held about a week earlier than planned “on account of the threatening appearance of everything without, and so that the students might safely reach their homes.”

Mount President John McCaffrey was known for his Confederate sympathies and refused to let the U.S. flag fly. “When Lincoln was shot, Federal orders were issued ‘for every house to display some sign of mourning. An officer visited the college, but there was no sign visible,’ until Dr. McCaffrey produced ‘a small piece of crape’ on a door which had been opened back so that it would not be visible until disclosed,” according to the Emmitsburg Chronicle.

In the spring of 1863, Mount student Maurice Burn was arrested by Union soldiers for sedition. Burn, who was from Louisiana, had written his father and expressed his Southern sympathies. Burn was jailed when he refused to sign an oath of loyalty to the Union. McCaffrey wrote Lincoln pleading Burn’s case, and the youth was released to McCaffrey’s custody.

In all, three students were killed during the war, according to “Mount St. Mary’s University: The Spirit Continues…” One of these young men was Maurice Burn, who had been arrested and paroled for sedition. Those young men were buried at the college cemetery on the mountain.