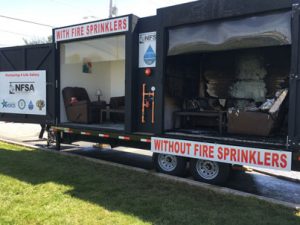 A large crowd gathered in Emmitsburg on April 8, 2017, to watch as two identical rooms, set up in a special apparatus in the parking lot of the Frederick County Fire & Rescue Museum/National Fire Heritage Center (NFHC), were set on fire. The room with the fire sprinkler protection sustained some damage, but the room without this protection was completely destroyed. First responders from the Vigilant Hose Company and the Emmitsburg Volunteer Ambulance Company participated in support of the demonstration, which was coordinated with the governments of the Town of Emmitsburg and Frederick County.

This event followed the dedication ceremony for the newly installed automatic fire sprinkler system in the Museum/NFHC.  The sprinkler system was paid for by donations from the National Fire Sprinkler Association and the Capital Region Fire Sprinkler Association, and was installed by Livingston Fire Protection of Hyattsville, Maryland, and Reliance Fire Protection of Baltimore. It will not only protect the irreplaceable contents of the Fire Museum and Heritage Center, it will be also used for sprinkler system training for members of fire departments.

The Frederick County Fire and Rescue Museum contains many interesting items, including pictures, artifacts, and histories from all twenty-six fire companies in Frederick County, as well as an 1821 “Old Lady” Hand Tub Pumper.

The National Fire Heritage Center, located in the same building, is dedicated to preserving America’s Fire History. Among the many documents is the September 11 incident report from Shanksville, Pennsylvania. All of these valuable documents and artifacts are now protected from fire by the newly installed sprinkler system.

Crowds gather to watch the side-by-side burn live demonstration in Emmitsburg (above), witnessing first-hand how a room without the fire sprinkler protection is completely consumed (below). 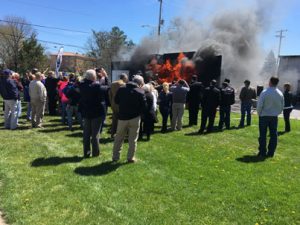