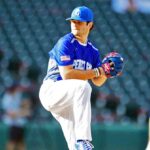 By TheCatoctinBanner.com On September 1, 2021 · Add Comment · In Featured Articles

Making the big league is every young athlete’s dream.

For Mason Albright of Thurmont, that dream has finally become a reality.

The Catoctin alumni pitcher was selected in the 12th round of the Major League Baseball draft by the Los Angeles Angels, giving him the opportunity to move one step closer to reaching a professional baseball career.

Albright, who pitched for Catoctin High School his freshman, sophomore, and junior year, spent his senior season in Bradenton, Florida, pitching at the IMG Academy among some of the nation’s top prospects.

Leaving friends and family behind for a year to improve was a tough decision, but ultimately, Albright felt it put him in the best position possible to begin a professional career in baseball.

Catoctin went on to win the state championship in Albright’s absence this past season on the back of a remarkably skilled pitching core, but Albright’s sights are set much higher.

The 18-year-old had plans to commit to Virginia Tech this coming fall, but the Angels made him an offer sweet enough to push the prospect to sign right out of high school, a feat that hadn’t been done by a Frederick County baseball player in over a decade.

With the first two draft days passing by without hearing his name called, the chances were getting slimmer and slimmer that he would accept an offer from a team and forgo his scholarship to Virginia Tech.

The Angels’ $1.25 million signing bonus offer is the largest in the bonus-pool money era of the draft for a player picked after the 10th round, which means the Angels knew they had an opportunity to pick up a talented player and ran with it.

With a limited amount of signing bonus money left, the Angels’ commitment to meet Albright’s signing value shows they believe he can make an impact down the line someday soon.

Albright held tight for a signing bonus that would persuade him to relinquish his commitment to Virginia Tech, and his confidence in his abilities ended up paying off big time on the final day of the draft.

The mission over the past year for the left-handed pitcher has been to improve his game, and he is now among elite company to eventually make the push onto the Angels’ roster.

The Angels used all 20 picks of their 2021 draft selection on pitchers, so the message is clear that the team wants to develop a deep prospect pool of pitchers.

Albright headed west to Tempe, Arizona, to the Angels’ training facility for a team mini-camp to grow with other top prospects for the coming season.

The future is bright for the former Cougar to make a splash into the MLB, and he’s just getting started on what is hopefully a long and successful career on the mound.