Not All Dinosaurs Were Huge, Some Were Shrimps

By TheCatoctinBanner.com On May 29, 2015 · Add Comment · In Featured Articles

Hundreds of millions of years ago, dinosaurs walked the earth, and hundreds of millions of years before that, prehistoric clams filled a vast lake that covered all of Central Maryland and a mud flat that stretched from North Carolina to Connecticut. The lake, known as the Lockatong, sat in the middle of Pangaea, an immense, C-shaped supercontinent.

Then came the drastic climate change that dried the lake, leaving the clams, fish, and other creatures laying in mud where they died. Small land animals moved across the mud flats, seeking water and leaving behind their prints in the mud.

Today, a portion of the former lake is a lush, green farm owned by John and Linda Ballenger in Rocky Ridge. Although the lake is gone, a small stream runs through the property bordered by layers of shale that are slowly yielding their secrets.

Although the Ballengers call their property Buck Forest Farm, among geologists, archeologists, and research papers, the property is referred to as The Fulton Site.

In 1994, John Edwards with the Maryland Geological Survey told Linda Ballenger that there might be dinosaur tracks on her property. Linda examined the area Edwards identified, but didn’t do anything with the information for ten years. That’s when she read an article by Richard D. L. Fulton about an Emmitsburg quarry where fossils had been found. Linda contacted Fulton and told him that her farm might have dinosaur tracks.

Fulton came out to the farm and confirmed what Linda had been told. He then asked permission to begin studying the farm for other prehistoric fossils. Since 2004, his search has yielded thousands of reptile tracks, skin impressions and bones, millipede and insect tracts, plant fossils, and fossil freshwater shrimp and fish.

The site has also attracted attention from researchers in the United States and abroad. Most recently, a group of graduate students from the University of Nebraska toured the site on May 13. They picked at the shale with their hammers and studied the pieces through loupes to see what had been unseen for millions of years.

Jean Self-Trail, a geologist with the U.S. Geological Survey, led the group, which was touring geological sites from North Carolina to Pennsylvania.

“This is part of a field course for these students to look at different types of geology,” said Self-Trail. “They usually go someplace like England or Spain, but, this year, we wanted to study the East Coast.”

In between digging at some of the sites, the students are engaged in various study exercises.

The visit to The Fulton Site was productive in that some additional fossils were unearthed. Robert Weems of the U.S. Geological Survey found fossils of tiny prehistoric shrimp called Cacostrian (or freshwater clam shrimp) that made faint half-moon impressions in the shale.

“We hit pay dirt both literally and figuratively,” Weems said, as he held up the find. Some researchers believe the clam shrimp found on the property to be a unique species.

Some of the other finds at the site include a nicely preserved imprint of a fish about four inches long. The fins, teeth, and scales can all be seen. Paul Olsen of Columbia University said that it represents the oldest dinosaur-age fish found to date east of the Mississippi River. The head of a second smaller fish appears to be jutting out of the head area of the four-inch fish, suggesting it may have been in the process of being eaten by the larger one.

The footprints of two types of reptiles, resembling dicynodonts—one a mouse-size species and the other a larger animal, about the size of a cat—have been found as well, along with the fossils of coelacanth scales.

Following the exploration of The Fulton Site, the group traveled up to the Fairfield Quarry in Fairfield, Pennsylvania, to view the dinosaur tracks that were found there decades ago. 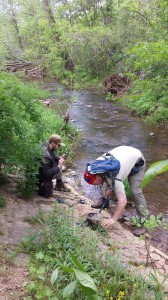