Energy costs for the Town of Emmitsburg will be lower at the end of FY2017 than they were six years earlier, and that is with the addition of the new, larger wastewater treatment plant that came online last year.

Emmitsburg Town Staff gave a presentation to the Board of Commissioners last month, outlining the town’s efforts to reduce its conventional energy costs by 20 percent by 2022. The town has instituted a number of changes since 2011 to achieve this including: (1) Using LED light bulbs in Emmitsburg street lights; (2) Installing the PowerStar system to reduce wasted electrical power; (3) Leasing solar power.

By installing energy-efficient LED bulbs in the street lights, the electricity costs for town street lights was reduced by 40 percent. “And the LED bulbs cut the town’s overall electrical use by 9 percent,” Town Manager Cathy Willets told the commissioners.

The Powerstar Voltage Optimization System, which was installed at the sewer pumping station on Creamery Road last year, optimizes the power that station draws. It also rejects excess power, which means that the town doesn’t have to pay for it. The system cost the town $17,587, and it is currently saving the town around $2,059 a year in electricity costs.

The use of solar power is the element of energy reduction that has become a point of contention on the board, with Commissioner Joe Ritz, III, questioning the accuracy of town’s staff’s presentation.

His concerns were based on a media report, predicting that the town could lose $1 million over the life of the twenty-year contract. The report apparently focuses on the narrow element that the town has leased more power than it currently needs, and while it can sell back excess solar power to First Energy, it does not receive as much as it cost to produce that excess power.

The town’s intention is not to have excess power to need to sell back, though. Cole Tabler, the town’s accountant, said more than once during the presentation that the excess solar power would disappear as the wastewater treatment plant was utilized more and when the Emmitsburg Ambulance Company comes onto the system.
“When we get to a point that we don’t generate excess, that’s when the savings really come in,” said Willets.

A portion of the excess was planned for. The new wastewater treatment plant did not come into service operating at its peak capacity. It currently operates at 65 percent capacity. However, when planning for how much solar energy needed to be leased, an amount was chosen to run the plant at full capacity. Another portion of the excess was planned for the Emmitsburg Ambulance Company, but it was not able to come onto the system when originally planned. The circumstances that caused the delay have changed now, and it should be eligible to come on the system by the end of the year.

Other savings have also been seen as a result of the solar energy use that isn’t seen in the solar energy numbers. For instance, the use of solar energy has severely reduced the cost of the energy being bought from Potomac Edison, including fees such as the distribution charge, which has been reduced about 90 percent each month.

Overall, the use of solar energy has saved the town money. According to figures from the town office, total energy costs for the town government for FY2017 is projected to be $167,000. This includes the cost of running the new larger wastewater treatment plant. This is lower than the town’s energy costs in FY2011 of $175,400 with a smaller treatment plant.

The difference in opinion of board members of the value of solar energy seems to be one of focus. The single item of the cost of unused solar energy is a loss, while the overall energy costs show a gain. 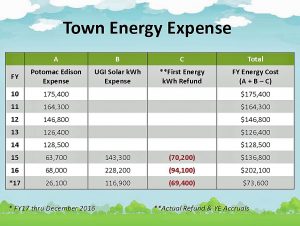 Chart shows Emmitsburg’s energy costs between FY2010 and FY2017. Column A is the amount paid to Potomac Edison, Column B is the amount paid to UGI for solar power, and Column C is the rebate amount for unused solar power. In FY2015 and FY2016, the new wastewater treatment plant was being tested and brought online. This accounts for the increase in total energy costs those years. Now that the plant is functioning, the power consumption is at its normal level, and the projected total energy cost for FY2017 is expected to be around $167,000.