By TheCatoctinBanner.com On March 28, 2019 · Add Comment · In Community News

Sam Zanella (pictured right) is a 2014 graduate of Catoctin High School and the FCPS Career and Technology Center’s TV Multimedia Program. Sam is an employee with Creative Technologies, Inc. in Los Angeles, California.

Sam recently worked as an Audio Technician in the Press Room at the 2019 Oscars, working along with press from throughout the world and the 2019 Oscar winners. Sam now resides in Burbank, California. 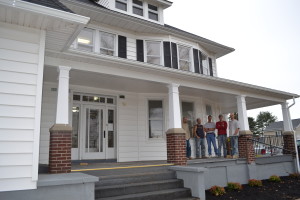 On January 12, 2015, the Thurmont Town Office will open in a new location at 615 East Main Street, in the premises of the former Dailey Funeral Home.  After a full renovation of the building, which was once the residence of former Thurmont Mayor James Black, the new offices are inviting, parking is spacious, and service is complimented with modern conveniences.

The move to the new premises will bring many positive changes for the staff and citizens of Thurmont. The spacious building will hold approximately 10 different sectionals, rooms, and offices for the staff. Although not all rooms will be open to the public, the space is being put to good use.

Upon stepping through the large front doors, you can choose entering the reception area to your right or entering the spacious commissioners meeting room to your left.

In the reception area, the receptionist’s station is the first work area you see. If Debbie Ecker and Melody Dix are busy with patrons who arrived beforehand, you may peruse the media area of brochures and pamphlets or sit and watch a flat screen television that will be running through announcements.

On the other side of the building, in the back of the commissioner’s meeting room, you will find restrooms, a drinking fountain, and beautiful, large windows that seem to draw visitors in. The meeting room can hold 50 chairs compared to the 35 chairs available in the previous building, and if more than 50 people are anticipated for a town meeting, additional chairs can certainly be added.

Some of the offices that the public will not have direct access to are; Lori Kaas, who is involved with permits and utility building; Becky Long who assists with Planning and Zoning and works with grants; and Tracy Schur and Wanda Stottlemeyer in the Finance Office. As always, the public will be able to pay utility bills, ask questions, inquire about permits for parks and pavilions, and submit plans for permits, construction, and variances. 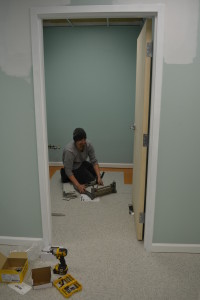 The second floor has a conference room, the commissioner’s office, and the mayor’s office. “We will be using the conference room a lot. Right now, I can accommodate four people in my office, but if we have meetings larger than that, we have to go to the meeting room. So this will be a nice place to bring people in to talk about things,” said Chief Administrative Officer Jim Humerick.

Before the town offices move, the building needed to have work done, both inside and out. The renovation of the building was a combined effort of the Lone Star Builders, Inc., Dorsey Brothers, Green Brothers Construction and Town of Thurmont Dept. of Public Works. Some of the different areas of renovation include: electrical, landscaping, sewer line connections, signs for the parking lot, flooring, and windows. The city accepted a grant to install energy-saving equipment, including new lighting and a state of the art energy efficient HVAC system. “With moving from the old to the new [building], the energy savings will be tremendous,” Humerick said.

An open house is in the works but the date has yet to be set. After the Town of Thurmont staff are settled in and they make sure operations are running smoothly, they plan for a weekend open house so the community can venture in and have a look around. There is no need to be worried about finding parking for the open house because the new building has 50 parking spaces, instead of the four at the old building. Another excellent feature of the parking lot is a drive-through lane with a drop box for people who are in a hurry and don’t want to leave their vehicle to drop off a bill.

The Public Works division will continue to work out of the 10 Frederick Road, location. Additionally, the Thurmont Food Bank will be relocating into the former town office building. There is no set date for the move, but it is hoped that towards the end of February, 2015, they will be ready for business.

The current office will be closed on Friday, January 9, so staff can make the move to the new location. Cubicles, furniture, and appliances will be among the items transferred to the new building.

“I think the new municipal offices will be a welcome improvement for both our staff and the residents of Thurmont, and I want to thank the Board of Commissioners for their shared vision of this new public facility and for their support during the entire process. A special thanks goes to Jim Brown and Jim Humerick for their oversight of the project and for managing to satisfy all the Commissioner’s requests and concerns during the renovations,” said Mayor John Kinnaird. 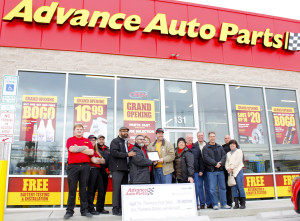 Advance Auto Parts opened the doors to their new building at 131 Frederick Road in Thurmont on December 20, 2014.

The Grand Opening ceremony started at 11:00 a.m. when the Advance Auto Parts staff welcomed friends, families, and current and previous Town of Thurmont staff members by gathering in the parking lot for speeches and dedications.

“We were made to feel so welcome that we were coming, and little by little we started to hear the buzz around town, and everybody was so excited,” Lou Perez, District Manager for Advance Auto Parts, said. “I think this was the right move for our company and the right move for Thurmont.”

Thurmont Store Manager Donald Starliper is excited about the new location in Thurmont. He has been with the company for three years and has been looking forward to his transfer to Thurmont. He explained about store-wide Grand Opening deals and the free services the company provides that include, testing car batteries, installing batteries, and the free installation of wiper blades.

“I think it’s a great addition to Thurmont; everybody seems excited about it and it’s been nice watching it grow from a hole in the ground to the finished product. Everybody is kind, courteous, and very willing to help you,” customer Sharon Richards said.

While the name of the Emmitsburg Business and Professional Association (EBPA)would make one think that the group is only interested in business issues in town, it does much more than that for the Emmitsburg community. This never becomes more obvious then during the EBPA’s annual banquet.

This year’s banquet was held in JoAnn’s Ballroom at the Carriage House Inn in Emmitsburg on December 5, 2014.

One of the major donations that the EPBA makes each month is to the Emmitsburg Food Bank. Board member Bob Rosensteel came up with the idea years ago to leave boxes at the registers of local businesses to collect loose change customers received after purchases.

“We never dreamed it would do what it’s doing, with something as simple as pocket change,” Rosensteel said.

In 2014, the change boxes collected nearly $5,500, which was then donated to the food bank to help feed local families.

EBPA board member Chris Ohanion reminded the audience that the EBPA had also taken over paying for the annual fireworks show during the Lions Club Emmitsburg Community Day.

“The generosity here in Emmitsburg is second to none,” said Rosensteel.

The EBPA is made up of nearly three dozen Emmitsburg-area businesses, who network and help promote Emmitsburg as a community.

For more information about the Emmitsburg Business and Professional Association, visit the EBPA website at www.ebpa.biz.

Newman succeeds Thomas H. Powell, president of the university since 2003. Newman’s appointment concludes a six-month national search process conducted by a committee comprised of members of the University Board of Trustees, as well as individuals representing the Mount community. Francis W. Daily, a member of the Board of Trustees and a 1968 graduate of the Mount, led the search.

“The committee entered this process with a clear understanding of the board’s requirements for our next leader. We focused on those candidates with experience in fund raising, strategic planning and fiscal leadership, strong communication skills, and a deep Catholic faith,” said Daily. “I commend my colleagues for the time they gave in searching for our next president.”

The announcement was made during an on-campus Mass celebrating the Feast of the Immaculate Conception.

Born in the United Kingdom, Newman, fifty-one, holds a BA degree (with honors) and an MA degree in natural sciences from Cambridge University, in Cambridge, England. Founded in 1209, Cambridge is the second-oldest university in the English-speaking world and the world’s third-oldest university. He also earned an MBA from Stanford University’s Graduate School of Business, in Palo Alto, California.

“Simon brings a strong background in business, finance, and leadership to our campus,” said John E. Coyne, III, C’77, Chairman of the Board of Trustees. “He has many strengths: his collaborative management style, vision, progressive leadership, experience as a successful entrepreneur, and passion for our mission—all remind us of the skills of our founder, Fr. John Dubois.”

“He is a devout Catholic— involved in his parish, serving as a religious education teacher, and for many years as an instructor working with youth held in detention. Simon’s energy and accomplishment, and notably his firm commitment to the Mount’s strong Catholic liberal arts tradition, will serve the University well as we enter a most competitive and critical decade in higher education,” Coyne added.

“I am honored to help continue the Mount’s rich legacy and to further lead the University on its quest for greatness,” said Newman. “President Powell has elevated the University’s academic profile as a leading Catholic liberal arts University. I am inheriting a very solid foundation for future growth and development, and very much look forward to joining the Mount community.”

Newman has almost thirty years of experience working as an executive with a strong background in private equity, strategy consulting, and operations. He is currently a Managing Director of the private equity fund JP Capital Partners, as well as President and CEO of Cornerstone Management Group, founded in 1997.

During his career he has started or co-founded four different businesses, completed more than $33 billion in transactions, and raised more than $3 billion in equity funding for ventures and bids he originated. He has led several business turnarounds and delivered more than $200 million in profit improvements.

He started his career in consulting working with Bain & Co and LEK Consulting where he managed the media and entertainment practice working with clients such as Warner Bros., Disney, and Universal Studios. He has also worked at Canal+ International, Liberty Media and the investment bank, Wasserstein & Perella.

An avid sportsman, Newman and his wife, Michelle, have two children: Chantel (six) and Sienna (three).