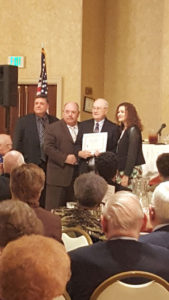 Now is the time to plan for celebrating your Valentine’s Day with the ones you love. What better way to express your love to your significant other, and give back to the community at the same time, than attending a charity wing feed?

The Emmitsburg Heritage Committee is holding a wing feed on Saturday, February 13, 2016, at the Emmitsburg Ambulance Building, located on Creamery Road, from 3:00-11:00 p.m. Proceeds will go to benefit our Community Heritage Day Festival, being held on June 25, 2016 (rain date will be Sunday, June 26, 2016).

Emmitsburg Heritage Day is our community’s annual Independence Day celebration, and is sponsored by many of our civic organizations. The event has been held for the past thirty-four years, and includes foods like barbecue chicken, prepared and served by our Lions Club, along with other foods like Italian sausages (prepared and served by our Sons of the American Legion), as well as games for children and adults, music, and a parade, followed by a grand fireworks display. Local charities, and our community as a whole, benefit from this great fun-filled day. Emmitsburg has a rich Civil War history, and there are many amazing sites to see and tour in the area.

The Valentine’s Day Wing Feed will be one of the fundraisers that will help to keep this great event alive, because Heritage Day is operated solely on donations and proceeds from fundraisers. There will be a variety of wings, with side dishes and dessert, along with a variety of liquid refreshments. The food will be served from 4:00-7:00 p.m., and music and dancing will be from 7:30-11:00 p.m. The doors will open at 3:00 p.m. At 7:30 p.m., liquid refreshments will be served until 11:00 p.m. for a donation of $1.00 each. We will also have games for adult entertainment, so please come out and have a great time and support the cause.

Erik Legg was named the 2014 Thurmont Volunteer of the Year in October 2014. He was chosen from among a group of six volunteers who had been nominated.

“Our community is very fortunate to have such individuals who give of their time freely,” said Colleen Gillen with the Lions Club.

Legg was nominated for his volunteer work throughout the community, particularly with Project Hope, an organization that helps find activities for young people to hopefully give them productive alternatives to drugs and alcohol.

“I lost my friend when I was twenty-one years old,” Legg said. “He died in my arms. That’s when I made the decision to help.”

Legg will have his name added to the Volunteer of the Year plaque that is displayed in the town office. He will receive a gift certificate for two to a local restaurant, and a $400 donation to Project Hope will be made in his name.

Other nominees for this year’s Volunteer of the Year Award were Beth Watson, Nancy Dutterer, Joann Miller, Regina Amery, and Rodman Myers.

“These are individuals with significant contributions to the Thurmont community and are well-rounded volunteers who generously give their time, energy, and skill,” said Joyce Anthony with the Thurmont Lions Club.

Also recognized at the ceremony in Community Park on October 25 was the 2014 Police Officer of the Year. Officer D. Armstrong was awarded this honor. He received a plaque, dinner for two at a local restaurant, and a $400 donation made to the charity of his choice, which was Boy Scout Troop 270.

The award ceremony was held as part of the Lions Club annual “Make A Difference” Day.

“This is a great opportunity for the Town of Thurmont to recognize the Volunteer of the Year and the Police Officer of the Year,” said Mayor John Kinnaird.

The Lions Club has been sponsoring the day since 2006. Each year, organizations and groups are encouraged to perform a service project during the day.

A couple dozen people, including three members of the Thurmont Board of Commissioners and Police Chief Greg Eyler, attended the afternoon ceremony at the park. Even as the Lions were recognizing volunteers in the community, dozens of volunteers were busy in the park preparing it for the Halloween in the Park festivities that evening.

The Thurmont Lions Clubs had planned on dedicating a Lion drinking fountain at the Community Park and a Lion bench at the Trolley Trail Park, but production problems have delayed the project.

“They will be tangible evidence of what the Thurmont Lions Club gives the town,” Wantz said. 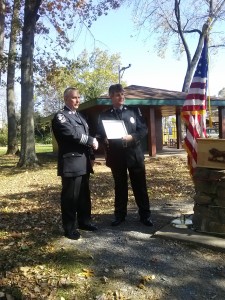