By TheCatoctinBanner.com On December 26, 2019 · Add Comment · In School News

On Fleek Brow Boutique to Open in Thurmont

Tamara Manahan—devoted wife, homeschool teacher, and mother of five—shares how she plans to use an up-and-coming cosmetic technique to make a difference.

It was in the spring of 2016 when Tamara Manahan first heard about microblading, a form of tattooing that deposits pigment under the skin to mimic the stroke of eyebrow hairs. Unlike traditional tattooing, this is done using a handheld tool, which helps make eyebrows appear fuller and natural looking. When first introduced to microblading by a friend, Tamara was intrigued but didn’t give much thought to the technique otherwise.

Later that summer, Tamara found out that she would become a life-saving bone marrow donor for her father, who had been battling Lymphoma. In preparation for her surgery, Tamara spent time in the waiting rooms of The Harry and Jeanette Weinberg Building at The Johns Hopkins Hospital in Baltimore. It was here where she developed an awareness of how many people are affected by cancer and disease, and the number of people that experience hair loss due to the effects of chemotherapy. And while some patients do experience hair growth during recovery, some, unfortunately, do not. Coincidentally, earlier that month, the same friend had reached out to Tamara about a microblading workshop in Washington, D.C.—the first of its kind, locally. Though she initially did not plan to attend, Tamara realized she had an opportunity to make a difference. Driven by her desire to give back, she attended the training held by renowned European master artist, Dovile Zilinskaite, of Branko Babic’s PhiBrows Academy—the most prestigious microblading academy in the world.

“Helping others is deeply rooted in my heart,” expressed Tamara, “which is what has truly made the process worthwhile.” Currently, Tamara is completing the final level of her microblading certification, which is timed with the opening of her studio. On Fleek Brow Boutique is located at 12 N. Center Street in Thurmont, where Diane “Dee” Miller had her shop (Dee’s Hair Stylists) for forty years. A beloved member of the community, Dee passed away in September 2016 after battling ALS. As a longtime neighbor and family friend, Tamara plans to donate ten percent of her initial proceeds to the ALS Association DC/MD/VA Chapter and Hospice of Frederick County in honor of Dee.

With this new venture, Tamara hopes to give back on a larger scale. “I believe that beauty is so much more than what we see when we look in the mirror. True beauty is reflected in the art of giving. I’m thrilled not only to be able to help people look and feel beautiful, but to give back with the hope of making a small difference in a world full of need.”

On Fleek Brow Boutique is set to open February 1, 2017, for scheduled consultations, with procedures beginning in March. For more information, please visit www.OnFleekBrowBoutique.com. 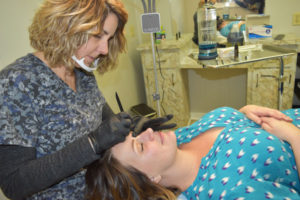 Tamara Manahan is shown in her studio, using microblading technique on a client.