Dreary weather didn’t deter Thurmont’s Business Showcase from a delightful turnout on Saturday, April 22, 2017, at the new Thurmont Ambulance Company Event Complex. The building’s bright chandeliers lit the large event area with plenty of seating for families to comfortably enjoy a fresh meal, which was provided by the ambulance company.

“I’ve been here for one hour, and I’m very pleased,” said Heather Heier, owner of Harmony Healing. Heather provides her Reiki services from her office in the Center of Life Holistic Center on Park Lane in Thurmont. Thurmont’s favorite Chiropractor, Dr. John Hagemann, is the proprietor of the space, and his wife, Márcia, teaches pilates there as well.

“There were people already here, so that’s a good sign!” said enthused owner, Champ, from Complete Auto Diagnostics on Roddy Road. Champ and his staff members were surprised to see people waiting at the door for the event to begin.

Carol Robertson, long-time volunteer with the Showcase, was also impressed with the turnout. “I’ll tell you what has been really nice: I’ve seen so many people that I know. Sometimes you don’t see them for months and now, today, I see them!”

At noon, spectators gathered to watch the ladies from Anytime Fitness demonstrate the popular “Zumba Workout.” Anytime Fitness’ Bette Troxell sat back and cheered them on. She exclaimed,” They rocked it, they got compliments, it was good.”

Following the high energy demo, “Out of the Blue” provided live entertainment. Local entertainer, Harold Staley, followed their act. He has performed at previous Showcases.

John Nickerson, a.k.a. Gnarly Artly, stood near the stage at his booth, enjoying the band. “This is great; I hope everybody comes back next year.”

Some businesses provided a taste of the everyday products that consumers will find in their shops. Some of the most creative booths included J. Rothrock Outfitters, a family owned business on East Main Street in Thurmont. They displayed a tent and other unique decorative pieces that would pique the interest of outdoor enthusiasts. “I love the live band; the facility is fantastic,” said proprietor, Hillary Rothrock. This being her second time at the showcase, she already looks forward to next year.

Eyler’s Flea Market also displayed a unique set-up, with a montage of items from their flea market vendors’ booths.

For some business owners, it was their first time at the Showcase. Jason Thakkar, the new owner of Super 8 Motel in Thurmont made it a point to greet other business owners and welcome the community to visit the motel, which is also now under new management.

The Irons family, from Old Mink Farm Resort, offered a hand-painted cabin scene for visitors to take a fun photo “in the woods,” while advertising some of their beautiful mountain get-aways for rent. The Irons even noticed that some of the people dropping by for information weren’t from the Thurmont area, a sign that the showcase had a bigger draw than expected.

Local non-profit groups like the Lions Club, Civitan, and Girl Scouts were also present at the Showcase. Two of the Girl Scouts were dressed as “Thin Mint” cookies. The costumes reminded many that it was time to show their support and purchase some of their favorite sweet treats. When asked if she was having fun, Miss Harrison, eight years old, exclaimed, “YES! It’s sooo fun!”

The ladies of the Thurmont Lion Club sold tickets for upcoming raffles and commemorative Thurmont memorabilia. The Civitan Club proudly displayed projects and fundraisers they’ve been promoting during the past year. Frederick County Executive Jan Gardener dropped by their booth to thank them for their service to the community.

Cunningham Falls State Park Ranger Travis Watts brought his feathered friends from the aviary to advocate upcoming events at the park. Parents and kids stood aside while Ranger Travis handled a screech owl.

In the next booth, Cindy Poole was busy promoting both The Catoctin Furnace Historical Society and Thurmont’s Green Team. While she was showing artifacts from Catoctin Furnace and promoting future events, she was also busy encouraging residents of the community to go green in Thurmont.

Lowman Keeney, president of the Thurmont Ambulance Company, worked behind the scenes to make sure everything was in order. His sister, LaRue, along with other volunteers, made sure no one went hungry during the event. Jim Wolfe and Tim Wiltrout manned the enormous grills in the kitchen, while others served up the meals and took orders. Many visitors were impressed with the size of the building and kitchen.

Vickie Grinder, Thurmont’s Economic Development director and Main Street coordinator, said there were forty-five vendors—seventeen more than the previous year. “We had a great crowd, with people of all ages. That’s what you want.”

Mayor Kinnaird was spotted making his rounds with his camera, capturing all aspects of the community-enriching event.

Overall, the 2017 Thurmont Business Showcase was very much anticipated by the community and a success for our local businesses and organizations. It’s safe to say that everyone looks forward to a prosperous year and to the next Showcase in 2018.

(below) Park Ranger Travis Watts, with “Scales and Tales” educates visitors on upcoming programs from Cunningham State Park, along with his side-kick, the screech owl.

Harmony Healing is the Place for Your Energy Makeover 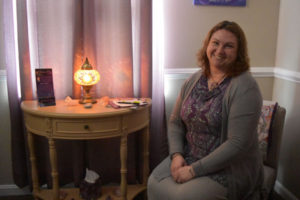 We all have energy! Some days, we may feel so energetic that we’re ready to rule the world! Most of the time, though, the number of days that we may feel tired and ready for a nap far outnumber our energetic days.

Did you know that our body has energy centers called chakras, energy centers within the human body that help to regulate all its processes, from organ function to the immune system? A Reiki practitioner is like an electrician who fixes our body’s chakras by lightly laying hands on us in areas that are near our chakras, to help heal and cleanse them. During a Reiki session, clients may experience warm sensations, tingling, and visually “see” different colors. Everyone’s experience is different, but all will agree that Reiki is relaxing and can be healing and often life-changing.

Benefits can include a deep feeling of relaxation, reduced blood pressure, reduced anxiety, diminished migraine pain, less depression, better sleep, increased energy levels, relief from chronic pain, less arthritic discomfort, and relief from the side effects of chemotherapy and radiotherapy. Reiki can also help release the toxins from the artificial foods we eat in our average diet.

Sounds a bit like a hoax to some, right? Heather Heier of Thurmont has been helped by the power of Reiki. When she experienced a tragic death in her life, she went through the process of grief and it changed her to the core. She wandered to find her life’s purpose. She had her “ahha” moment while taking Reiki classes. She liked Reiki so much that she decided to become a Reiki practitioner. “Trying to find myself, I found Reiki, and when I found Reiki, I found myself.” Her purpose is to help other people, and she wants to give back. She named her Reiki business Harmony Healing. “This is what I’m meant to do.”

Heather explained, “We’re all in the middle of life—we’re stressed, we’re overstimulated, and life experiences have damaged our chakras. We feel sick, tired, and in pain. A chakra may be connected to those feelings, but we can’t see it.”

One of Heather’s clients went to the doctor several times over the course of several years. She was always told that there was nothing wrong. After trying a Reiki session, the client’s symptoms decreased, and after another session, went away entirely.

During a Reiki session, your clothes remain on, you lay face up, or sit, in a comfortable space, covered with a snuggly blanket. Heather doesn’t know, or inquire about, your health history, ailments, or symptoms. Since Reiki is divine, it is the relaying of healing energy for you from your divine light (YOUR divine energy source). The light repairs the chakra and fills the holes. Heather is the conduit for that to happen. She doesn’t claim to be a healer, but Reiki opens the power of healing. She will not manipulate your body in any physical way. There will be a lot of healing taking place that you just can’t see. After a session, you will be relaxed, and healing will have taken place. There is never an obligation to have additional sessions.

Heather describes a Reiki session as your “energy makeover.” Harmony Healing is located inside the new Center of Life Holistic Center offices on Park Lane in Thurmont. To book your session, which usually lasts about an hour, visit HarmonyHealingByHeather.com, email Heather4Heier@gmail.com, or call Heather at 301-418-8842. View Harmony Healing’s advertisement on page 40.