By TheCatoctinBanner.com On April 29, 2022 · Add Comment · In Featured Articles

Thurmont has been home to many a war hero, past and present.  The town has also been a safe place for immigrants, refugees, and those seeking a safe, friendly community in which to raise a family. One of Thurmont’s newest residents is not only an immigrant and refugee, but also a war hero, who is credited with saving the lives of American soldiers during the war in Afghanistan.

This new neighbor goes by the name “Amana.” She is a petite and, at first glance, unassuming woman, who is happy to shop, work, and raise her family in our quiet mountainside community. But assumptions aside, she is a brave woman with military skills who directly supported U.S. Special Operations Forces as a Captain in the All-Female Tactical Platoon (FTP). Her 39-member platoon’s mission included hunting down and capturing Taliban and terrorist combatants wanted by the U.S. and Afghan Defense forces. She and her family’s story is one of great risk, survival, heroism, and ultimate rescue from war-torn Afghanistan.

The journey from her native country to the United States included her two teenage daughters, Maryam and Omulbanin, or “Omul” for short. They have lived in Thurmont for several weeks. Both of the girls are enrolled at Catoctin High and Thurmont Middle School, respectively, and according to Maryam, who speaks English, have been “warmly welcomed” by students and teachers, alike.

Omul is pleased that she has met another Afghan friend who attends her school. Both girls claim math as their favorite subject, with Maryam liking psychology, too.

Amana is currently enrolled in English language class at Frederick Community College (FCC). She is currently working at a local eatery and hopes to return to a career serving the U.S. military, once fluent in her new language. She says she and her girls feel very safe in Thurmont. They are enjoying strolls in the park, bicycling, and trips to the grocery store and library. This is a remarkable development, for within current Afghan culture, females must have a male escort.

When asked how she came to serve alongside U.S. armed forces in Afghanistan, Amana reminisced  about how she came to assist U.S. armed forces with a sparkle in her eyes. “At the end of 2011, while still a high school student, I saw a television commercial advertising for the Female Tactical Platoon (FTP). I applied, and after 10 months of training, I became a soldier involved with American soldiers in internal defense operations.” Amana and the FTP soldiers were trained to U.S. standards in weaponry, counter-IED expertise, navigation, medical skills, and tactical exercises. With over 2,000 missions conducted between 2011-2021, these Afghan women soldiers not only assisted U.S. Army Special Ops, but also Navy Seals, Green Berets, and Army Rangers. Additionally, Amana served as an instructor, training female police at the U.S.-led Afghan National Police Center.

Toward the collapse of the once democratic Afghan government, before the imminent Taliban takeover, Amana had to quit her job and become a teacher. It was too dangerous to continue as a soldier and policewoman. She eventually had to leave her home in Mazar-e-Shariff and move her daughters to Kabul to plan their departure from Afghanistan. Her life was in grave danger due to her close association with the U.S. military.

On the last day before the Taliban takeover, Amana’s American female counterparts, known as the Cultural Support Team (CST), helped her and her girls get to the airport and board one of the first U.S. planes to exit Afghanistan. In fact, all 39 members of the Afghan Female Tactical Platoon (FTP) were successfully evacuated due to the efforts of the CST.

What followed their departure was a whirlwind of airports, countries, and refugee camps.  Amana and her girls spent 36 hours in Qatar, four days in Germany, four days in D.C., six weeks at Quantico, and five months in Atlantic City, before finally finding a home in Thurmont. The non-profit relief organization, Samaritan’s Purse, placed them in the care of a group from Grace Community Church of Frederick. Members, David and Kathy Afzali and Charlie and Diane Powers, took 12 courses, numerous written tests, and passed all vetting requirements of the non-profit to become sponsors of this refugee family. Samaritan’s Purse continues to support Amana and her family in partnership with these sponsors to ensure a successful transition to life in the United States.

Although she misses her family that remain in Afghanistan, Amana is hopeful for the future, emphasizing again her desire to work for the U.S. military that means so much to her. For the time being, she and her daughters are contented to be in Thurmont and safe at last, in a place they can truly call “home.”

To read more about the FTP, refer to www.politico.com “The Untold Story of the Afghan Women Who Hunted the Taliban” 4/8/2022.

For more information about the CST, consult www.sistersofservice.org.

Amana pictured in Thurmont with two new bicycles provided for her daughters by a generous donor. 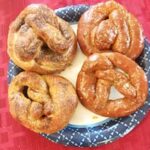 Happy September! Today’s dish will be celebrating the rich culture and flavors of Oktoberfest: Soft pretzels!

Brought to America by German immigrants, the soft pretzel carries great German history with it. Used as a symbol of prosperity and good luck, pretzels were enjoyed by both the rich (used as a symbol for undying love for aristocratic couples) and the poor (monks baked and distributed pretzels to those living in poverty). Today, the pretzel reaches many audiences as well, both culturally (enjoyed by Americans and Europeans) and flavor-wise (can be customized with both sweet and savory seasonings, thanks to the minimally-flavored dough).

Pretzels are relatively easy to make, and you can customize them with the flavor of your choice. One step of this recipe may be confusing: boiling the pretzel in baking soda. Why? Boiling the pretzel gives it the puffy shape, and the baking soda gives the pretzel its iconic brown outside. Though it takes a bit more time than simply folding and baking the pretzel, the outcome is worth it: a soft, iconically brown pretzel.

Enjoy your Oktoberfest! May these soft pretzels indeed grant you luck and prosperity, and Ein Prosit der Gemütlichkeit!