By TheCatoctinBanner.com On December 29, 2020 · Add Comment · In Community News

On Sunday, December 6, 2020, the family of the late James E. “Jef” Fitzgerald, Sr., gathered at the Vigilant Hose Company’s (VHC) emergency services stationhouse at 25 West Main Street in Emmitsburg to dedicate the apparatus bay in his memory. Jef, a much-respected and well-known area resident, was instrumental in overseeing all aspects of the significantly expanded and enhanced VHC facility back in the decade of the 1990s. The activity included collateral efforts to plan for and acquire the community’s first aerial ladder truck, Tower 6.

Portions of the re-constructed and enhanced complex included dealing with sections dating back over 200 years.

Jef was a life-long dedicated VHC member, including having served for several years as VHC president. Jef passed at his home on January 10, 2013, minutes after arriving there from a work detail at the station.

Due to COVID-19 restrictions, attendance at the December 6  event was limited. Thus, it is hoped that all who knew Jef will make it a point to view the permanent plaque on display along West Main Street on the exterior wall out front of where Tower 6 sits.

By TheCatoctinBanner.com On August 31, 2018 · Add Comment · In Featured Articles 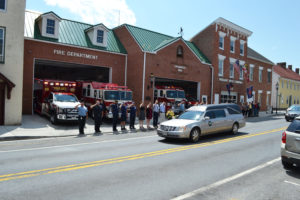 On Wednesday, August 8, 2018, family members, along with First Responders of Emmitsburg’s local volunteer fire department, the Vigilant Hose Company (VHC), as well as area citizens and civic leaders from across the region, gathered to say farewell to past VHC fire chief Tom White (pictured right), who passed away on Friday, August 3, 2018, at the age of seventy-six. During viewings the previous day at the Myers-Durboraw Funeral Home in Emmitsburg, the large attendance was testament to an individual who had placed great importance on community service during his entire lifetime. Having previously held all leadership ranks within VHC over the years, Tom became Vigilant Hose Company’s chief in 1984—the department’s 100th anniversary year.

Chief White was carried to his final resting place aboard VHC’s Engine 63 (a 1989 Pierce custom pumper), which he had helped design and purchase during his years as chief of department. Upon leaving the church, his funeral procession passed along Emmitsburg’s West Main Street and VHC’s stationhouse, where members had assembled to render their final salute while positioned in front of emergency vehicles draped in memorial black bunting.

From the Town Square, the procession continued down South Seton Avenue, pausing briefly while passing the Frederick County Fire/Rescue Museum, owing to Chief White’s past service as president of the Frederick County Volunteer Fire/Rescue Association.  The antique rigs there were also adorned with black bunting, including VHC’s Old Engine 63 (a 1945 Ford pumper). At the cemetery in Thurmont, VHC’s Tower 6 proudly displayed a large American Flag, which waved gently during the graveside service.

Tom was a maintenance specialist with State Farm Insurance Company in Frederick for twenty-three years. He was previously employed by Myers Radio and TV in Emmitsburg. He was a member of St. Joseph Catholic Church in Emmitsburg, and was a proud Veteran of the Army National Guard. A lifetime member of VHC, he loved spending time at the firehouse, where he could be found brewing the first pot of coffee every morning for the “Coffee Club” and sharing the day’s news and stories of what was happening around town with fellow members. About Tom, VHC’s president and long-time friend, Frank Davis, shared, “He was a firefighter’s fire chief. He would teach and give others the opportunity to learn and lead.” He added, “He was the first fire chief that didn’t work in Emmitsburg (State Farm Insurance in Frederick) and that allowed others to step up and learn the job.”

A lifetime member of VHC, Tom was inducted into the VHC Hall of Fame in 1998 for his distinguished and extraordinary service to the company and the community. He was also past president of the Frederick County Volunteer Fire and Rescue Association. 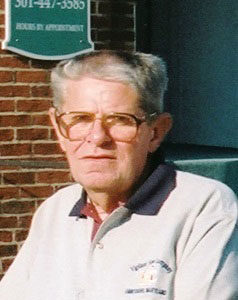 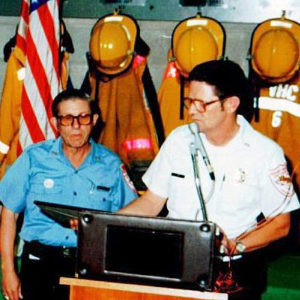 Hub and Tom in uniform at the fire station’s podium in the 1980s.