By TheCatoctinBanner.com On November 27, 2019 · Add Comment · In Community News

The Frederick County Fire & Rescue Museum will have a special holiday open house in conjunction with the “Museums by Candlelight,” being held throughout Frederick County, on December 14, 2019, from 12:00-7:00 p.m. The museum will have many artifacts from every fire company in Frederick County. The museum features the “Old Lady” hand pumper of the United Fire Company and United Volunteer Fire Company of Libertytown, as well as the ornate 1893 hose carriage “Romeo,” owned by the Independent Hose Co. No. 1 of Frederick. The newest addition to the museum is the magnificent William Cochran glass etching “Volunteers” on display in front of the museum. The museum will stay open until 7:00 p.m. to afford visitors an opportunity to see this beautiful art, brightly lighted during evening hours.

The open house will also feature a visit from the North Pole Fire Chief. Fire prevention and life-safety materials will be available for adults, as well as fire helmets and fire safety coloring books for the kids. Again this year, the museum will also serve as a drop-off point for Toys for Tots during the special museum hours on December 14.

The Frederick County Fire & Rescue Museum is located at 300B South Seton Avenue in Emmitsburg and will be open from on December 14, from 12:00-7:00 p.m., for this special holiday treat.

By TheCatoctinBanner.com On September 26, 2019 · Add Comment · In Featured Articles

The men and women of Emmitsburg’s community fire, rescue, and emergency medical services proudly announce their annual Fire and Life Safety Open House on Thursday evening, October 10, 2019, from 6:00-8:30 p.m., at the Fire Station, located at 25 West Main Street in Emmitsburg. This will be the 64th year that Vigilant Hose Company (VHC) personnel have sponsored this always-popular event. Fire and injury prevention in Emmitsburg is a year-round effort done in concert with area residents, businesses, schools, institutions, and governmental agencies, but it’s during Fire Prevention Month that department personnel seek to especially underscore the importance of prevention and preparedness.

Fire Prevention Week is October 6-12, 2019. The theme for National Fire Prevention Month 2019 (October) is: “Not Every Hero Wears a Cape: Plan and Practice your Escape.”

As part of the VHC’s continuing efforts to educate everyone in our community about essential elements of smoke alarm safety, this year’s Fire Prevention Open House will include: information and demonstrations to help families and individuals prevent unwanted fire; Emergency Medical Services providers will be on hand to showcase their life-saving skills; VHC personnel will be showcasing smoke detectors; “STOP THE BLEED” (courtesy of the Junior Fire Company of Frederick), with insights on the national awareness campaign that encourages bystanders to become trained, equipped, and empowered to help in a bleeding emergency before professional help arrives; information regarding opportunities for residents and business alike to help their First Responders; information regarding the countywide “Gear-Up” Campaign; Frederick County Resident Deputy Sheriffs will offer crime prevention materials and a range of important safety insights; fire truck rides; free refreshments; door prizes; and more! For more information, visit www.vhc6.com.

By TheCatoctinBanner.com On August 29, 2019 · Add Comment · In Featured Articles

Installation of a large three-panel glass etching, featuring a 1920’s-era fire engine departing the old Independent Hose Company (IHC) fire station in Frederick, got started during mid-August at the Frederick County Fire/Rescue Museum on South Seton Avenue in Emmitsburg. Measuring over 15 feet across and nearly 9 feet tall, the impressive display is to be dedicated on Friday evening, October 4, 2019, during National Fallen Firefighters Memorial Weekend.

The etching originally arrived in March 2018 by way of the Emmitsburg Glass Company (EGC). It had been removed while in the process of installing new window panels at the historic original IHC engine house, formerly located at 12 West Church Street in Frederick.

Created by well-known designer William N. Cochran of Frederick in 1988, the etching is made-up of three panels, weighing a total of 1,500 pounds (the largest of the panels is 900 lbs.). Cochran is responsible for Carroll Creek bridge murals in downtown Frederick, among many other art projects. The new owners of the West Church Street building donated the large etching to the Museum, working in concert with members of the IHC and the Museum.

Emmitsburg Mayor Don Briggs, a strong supporter of this opportunity, as well as the museum, earlier stated, “Having a piece of artwork done by Mr. Cochran will be a wonderful addition to the town.” The overall transfer included coordination with the new owner of the W. Church St. building, the Emmitsburg Glass Company, IHC Member Dewey Foreman, etching designer William Cochran, the Town of Emmitsburg, and several Museum personnel.

The current installation is being overseen by John Wantz of S&W Wantz Construction, a local firm, who is doing excavation and foundation work, working jointly with the EGC who will be placing the etching into a frame and housing display. It will be pleasingly lighted from the interior and certain to be a source of joy for area residents and visitors alike.

EGC President Dan Reaver was onboard with this project right from the beginning. One of his key foremen, Kenny Simmers, oversaw the etching’s removal and transfer to Emmitsburg for storage inside the Museum until now. A fundraising project led by Museum President Chip Jewell has allowed for its completion. More will be forthcoming on the October 4 evening dedication ceremony.

I’ve visited the Frederick County Fire and Rescue Museum twice this year because once was just not enough. There is so much to discover, not only about the equipment, apparatus, and artifacts, but more importantly, about the people who have dedicated their lives to protecting the residents of Frederick County.

Frederick County Fire and Rescue Museum President James Deater and Secretary Joy Deater gave me a tour of the museum, which is located in Emmitsburg at 300B South Seton Avenue, in a building that was previously occupied by the Emmitsburg Ambulance Company. Their knowledge of history is impressive and their enthusiasm is apparent.

The history of all twenty-six fire companies in Frederick County is on display. Some of the equipment is on loan to the museum. One example is the 1893 Hand-Drawn Hose Reel, a name which accurately describes its function. The fire hose was wrapped around the reel, which was pulled by hand by firefighters.  The separate pumper carrying water was also pulled by hand to the fire.  A 1939 Pumper, on loan from the United Steam Fire Engine Company No. 3, is also on display along with several other pumpers and hose reels.

Many of the artifacts have been donated for permanent display by firefighter families, fire and rescue companies, as well as the Frederick County Fire and Rescue Association and Maryland State Firemen’s Association. There are uniforms, helmets, firefighting gear, and equipment. One room holds early radio communications equipment and pictures. Hanging on a wall is a life net that was used to catch people who jumped from buildings to escape fires.  Display cabinets contain newspaper clippings, photographs, and other historical objects. The Frederick County Fallen Firefighters and Rescue Personnel Memorial Wall, sponsored by Stauffer Funeral Homes PA, is a tribute to the twenty-three firefighters who died in the line of duty in Frederick County.

The building is also home to the National Fire Heritage Center, an organization committed to preserving the history of the American Fire Protection Services.  The Heritage Center houses a collection of books, documents, and other historical items. Together with the museum, they are currently hosting the traveling exhibit of the National Smokejumper Association.  On display is a fully outfitted smokejumper mannequin, along with firefighting tools and information panels. Later this summer, a new display will take its place.

The museum is open Saturdays and Sundays, from 12:00-4:00 p.m., April through October. However, tours are available by appointment at any time. Individuals and groups are always welcome. To arrange a special tour for a group, contact Jim Deater at 301-639-1290 or by e-mail at jdeater@comcast.net. Put the museum on your list of places to visit this summer. 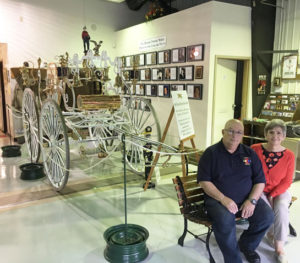 Jim and Joy Deater are shown seated in front of the 1893 Hand Drawn Hose Reel, which is on loan from the Independent Hose Company #1. In the background is the Frederick County Fallen Firefighters and Rescue Personnel Memorial Wall.