Commemoration of the World War I Centennial 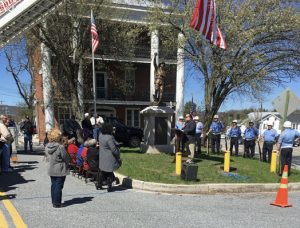 A solemn, respectful crowd gathered in Emmitsburg on Saturday, April 8, 2017, for the ceremony to commemorate the 100th anniversary of the United States’ entrance into World War I on April 6, 1917.

The event, sponsored by the Town of Emmitsburg, along with the Francis X Elder Post 121 American Legion and the Veterans of Foreign Wars Post 6658, was held in front of the Doughboy statue in town. The ceremony began with the Pledge of Allegiance, an opening prayer by Father John Holliday, and a welcome by Emmitsburg Mayor Donald Briggs. Commissioner Glenn Blanchard gave a brief history of the war and added a personal story about his own grandfather, who served in the war. The ceremony continued with the American Legion and VFW Color Guard and the laying of the wreath by the commanders of the Post.

The Doughboy statue was erected in 1927. Doughboy is the name of a World War I foot soldier. On the pedestal are the words, “This memorial erected and dedicated in honor of those from Emmitsburg district who served in the world war.” It includes the names of those who made the supreme sacrifice.

This Veterans Day, November 11, 2016, was a beautiful day to continue with our traditional program of visiting all of our cemeteries in and around Emmitsburg, where we pay tribute to our local Veterans buried there.

The Color Guard was brought to attention at 11:00 a.m. at St. Joseph’s Cemetery, in front of Francis X. Elder’s grave site, for the first volley of firing of rifles, the bugler playing taps. The next firing was in front of the World War II, Korean War, and Vietnam War monuments, located in front of the Francis X. Elder Post 121 American Legion. The Lutheran Church Cemetery was the next site of the Color Guard rifle volley and taps. The Doughboy, our World War I Monument on West Main Street, was the next setting for our Color Guard tribute to Veterans. We left the Doughboy and, next, fell in at attention at the Emmitsburg Memorial Cemetery, on the hill, for our fifth rifle volley of the morning. The New St. Joseph’s Cemetery was the next sacred stop where our Color Guard paid tribute.

The people that followed us from cemetery to cemetery were invited back to Francis X. Elder Post 121 to an open house, where there was food and socializing. The Color Guard rested for the final program that took place at St. Joseph’s Ministries, beginning at 2:00 p.m.

The Color Guard arrived at St. Joseph’s Ministries at 1:45 p.m. and ran through a quick practice of exchanging the National Flag on the flag pole. Details of the program were discussed with Annie Wantz, who coordinates all activities for the residents, and at 2:00 p.m., Annie made the announcement and the Color Guard came to attention and began their march to the flag pole. The old flag was brought down and retired, and the new flag was run up to replace it. While this was being done, a voice was heard singing the National Anthem. When the song was done, the bugler immediately played Taps. It was so beautiful and inspiring that I even saw one of the resident Veterans, who was confined to a wheelchair, pull himself to his feet to salute the flag while the National Anthem was being sung.

Everyone went into the activity room after the flag ceremony ended, and a program was held; certificates of appreciation and fruit baskets were given to the Veteran residents. The Color Guard presented colors for the ceremony, and the Ladies Auxiliary Unit 121 handed out the fruit baskets and certificates. Everyone was invited by Annie, and her wonderful staff, to stick around after the program and have snacks and socialize with the residents.

It is events like these that make me glad I accepted being Captain of The Color Guard; the members have helped me when asked, and I am proud of them all. 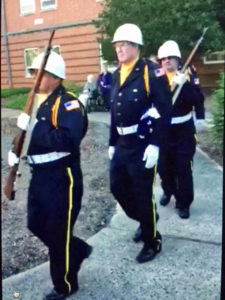 The Color Guard is shown entering the flag area at St. Joseph’s Ministries.