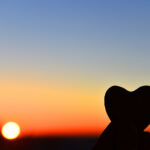 Joseph Flautt Frizell was walking along the tracks of the Emmitsburg Railroad one evening in May 1922 with some friends. They were goofing around, as teenage boys are known to do, as they approached the station located on South Seton Avenue.

The Emmitsburg Railroad had been incorporated on March 28, 1868. It connected Emmitsburg to Thurmont by rail, and from there to other communities via the Western Maryland Railway. Besides making it easier for townspeople to travel to places like Baltimore, it also provided a convenient way for students to arrive at St. Joseph’s College and Mount Saint Mary’s College. The railroad was more than seven miles long and opened for passenger service on November 22, 1875.

Frizell and his friends saw a baggage car approaching them. Then they noticed another local youth, Paul Humerick, on the front of the baggage car. He had apparently jumped aboard hoping to catch a free ride, probably destined to the station in downtown Emmitsburg, which marked the end of the line.

What Humerick hadn’t noticed was that the baggage car had detached itself from the rest of the train and was coasting down the incline in the tracks. The boys on the ground called for Humerick to get off the car, but he ignored them, apparently not recognizing the danger.

“Quick as a flash young Frizell realized the danger and ran after the car, which was moving slowly, jumping it and at the same time pulling Master Humerick down to the earth,” the Catoctin Clarion reported.

The boys hit the ground, rolled, and climbed to their feet unharmed. Meanwhile, the baggage car continued just a short distance before it hit an embankment. They watched the baggage car “smash over the embankment into a tree. The large tree hit in just the place where Humerick was standing on the car and eyewitnesses say that had the young boy held his place he would have been badly mangled if not killed outright,” published the Catoctin Clarion.

Frizell spent the week afterwards being praised by his friends as a hero. The newspaper said the praise was rightly deserved because “it was not only a brave deed but showed that his mind was working fast to take in the situation.

The incident was investigated and it was found that after the train had stopped at St. Joseph’s College Station without incident on its way to the end of the line at the Emmitsburg station, it was believed that while the conductor was helping passengers off the train at St. Joseph’s College, someone had uncoupled the cars. The train had left the station heading for Emmitsburg, but the baggage car had separated from the rest of the train on an incline.

The car suffered some damage in the accident, but it was expected to be repaired and put back in service. None of the baggage in the car was lost or damaged.

The Emmitsburg Railroad stopped its service in 1940 due to more attractive business options, such as car travel.