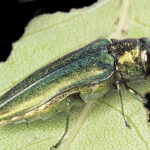 A forester from the Maryland Department of the Environment Forestry Division toured Thurmont’s Community Park a few months ago, studying each tree. The emerald ash borer had been found on private property in Thurmont, and he wanted to see if the beetle had made it to other properties.

The emerald ash borer is an Asian beetle that probably arrived in this country in wooden packing materials originating in foreign countries. The adult beetles feed on ash tree leaves. This causes little serious damage to the trees. The problem is that the larvae feed on the inner bark of ash trees. This disrupts the tree’s ability to transport water and nutrients, which eventually kills the trees.

The forester’s evaluation was that all but a few of the 276 ash trees in the park had been infected with the emerald ash borer.

The Thurmont Mayor and Commissioners had already allocated $35,000 to treat the trees when they got the news. They asked if having the trees protected would save them. They were told that the trees were already dying and would be completely dead within two years. If treated, that lifespan might be extended a year.

“We could pay $340 a tree to treat the trees, but once the tree is infected, it’s dead,” said Mayor John Kinnaird.

This has caused some discussion among the commissioners with how to deal with the problem. They have come to the realization that the ash trees can’t be saved, which means that the Community Park will lose about forty percent of its trees.

“My personal feeling is if they are going to die anyway, I would rather replant other trees,” said Kinnaird.

While that seems to be the consensus of opinion, the problem is what trees to replant, how large should those trees be, and how to pay for all of it.

“There is going to be a generation of park users that won’t have a Community Park as the nice, shady park that we’re used to seeing,” expressed Kinnaird.

The problem is the sheer number of trees that will need to be replaced. Even minimal costs become expensive when multiplied by 276.

The first thing that the town is doing is using the money allocated for treatment to replace trees. Town staff has also applied for the $1,500 grant to help with costs.

Town staff will start by removing the trees that pose the most danger to park visitors, because they could fall over or drop a limb. Additional trees will be removed in the late fall after Colorfest and early spring. At that time, the new trees will be planted.

The ash trees won’t all be removed at once since that would leave large gaps in the shade cover, and the cost to remove all of them at once would be cost prohibitive. Removing a single tree costs around $800. Removing 276 trees would cost around $221,000, and this doesn’t even include the cost of replacement trees.

Since the town has a couple of years before all of the ash trees are expected to be dead, the mayor and commissioners will allocate money each year for the purpose of removing dead trees and replanting new ones.

“My hope is that some of the trees will last four to five years,” Kinnaird said. “It will be a slow removal process, but it will help keep it from being cost prohibitive.”

The town’s other parks should not have to deal with this problem. Memorial Park has oak and maple trees. Eyler Park has maple and holly trees. The other properties don’t have trees or have enough trees to be an issue.