Donna Voellinger, dedicated volunteer at the Thurmont Historical Society, was awarded the Thurmont Grange’s Community Citizen Award during a Grange dinner held on November 24, 2014, at the Grange Hall in Thurmont.  In addition to her commitment to the Thurmont Historical Society, Donna is a compassionate and dedicated individual who would help anyone in need, and does so in a variety of roles within her reach. The adage, “If you want something done, you ask a busy person to do it,” seems to fit Donna perfectly. She most often anticipates the needs of others in their time of illness, shut-in, hospital, doctor visits, or bereavement, offering assistance before being asked.  She is always ready to help at her church, especially with the food committee, by serving meals and making potato salad.

In earlier years when her children were in Thurmont schools, Donna was very much involved in Little League sports, SHOP, and Safe and Sane.  It was evident that many students and their parents felt comfortable working with “Mrs. V” in accomplishing whatever task was at hand.

It was noted humorously by several at the dinner that Donna has earned a reliable reputation for using her big snow blower to clean her neighbors’ driveways.  Deb Spalding with The Catoctin Banner said, “Donna and her husband were my CYA girls’ basketball coach in middle school. She had an early influence on several of us who earned state semi-final championships in high school basketball for three years.  Donna always smiles when she remembers the first practice, where stand-out Tammy Joy showed her abilities. Donna has had an impact in many areas and in many people’s lives.”

For more information about the Thurmont Grange, please call Rodman Myers at 301-271-2104.

“I can’t think of anyone else who has served this community more so quietly,” said Mayor Donald Briggs.

The audience of approximately fifty people gathered in Joann’s Ballroom in the Carriage House Inn in Emmitsburg.

Following dinner and entertainment provided by Knight Time Impressions and the Fairfield High School Show Choir, the audience watched a video of local residents talking about Dr. Portier. They spoke of her kindness and quality care and how she was a role model to those around her of how to serve others.

The EOPCC website notes that, “In 2008, EOPCC donated $29,000 in services for the uninsured alone. This does not include donated medications. Nor does this include services at severely reduced re-imbursements such as medical assistance programs.”

The EOPCC began in Thurmont in 1999, and expanded to a Gettysburg office two years later. The current and permanent site for the EOPCC opened at the end of 2005, where it continues to provide quality health care to patients, regardless of their ability to pay. 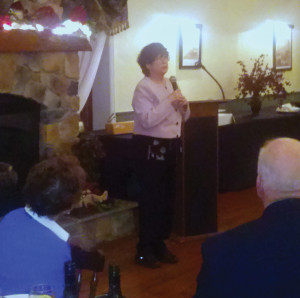 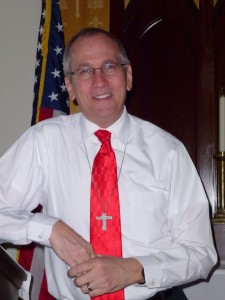 t. Mark’s Lutheran Church in Sabillasville welcomed its new pastor, Rev. Mike Simane, on November 1, 2014. Rev. Simane holds a Master of Divinity degree from the Lutheran Theological Seminary in Gettysburg, Pennsylvania. In addition to serving at St. Marks, Rev. Simane also works as a chaplain at Hospice of Washington County.

Pastor Mike, as he likes to be called, lives in Smithsburg, Maryland, with his wife of twenty-five years and two daughters. Pastor Mike enjoys reading and spending time working in the yard.

“There is a peace that comes when you’re mowing the lawn or tending the garden,” said Pastor Mike. Although, he jokes, “It’s not too peaceful shoveling snow.”

An election of officers was held at the November 2, 2014, Rocky Ridge Progressive 4-H Club Banquet.

The Maryland Cooperative Extension Service’s programs are open to all citizens without regard to race, color, sex, handicap, religion, age or national origin.

Emmy Award winning producer, Chris Haugh, premiered his highly anticipated film documentary, Almost Blue Mountain City: The History of Thurmont, on Sunday, October 26, 2014, at The Springfield Manor Winery & Distillery near Lewistown. The showing was a great success, and everyone left knowing a lot more about the founding of the original Mechanicstown—now Thurmont—as well as how Thurmont got its name and what the lives of the people who worked and raised families in the area was like over the years. The event was sponsored and organized by Donna Voellinger and the Thurmont Historical Society, with representatives in attendance from the Catoctin Furnace Historical Society, Main Street Thurmont, the Frederick County Department of Tourism, and more.

It was a beautiful, sunny fall day on the edge of the Catoctin Mountains at historic Springfield Manor, former home of James Johnson, one of the original owners of the Catoctin Furnace. He lived in the house from 1793 to when he died in 1809. The manor provided the perfect setting to learn the history of Thurmont in the film documentary, which was comprised of well-researched documents dating back to the early 1700s, as well as video interviews taken over the past fifteen years from long-time Thurmont residents such as George Wireman, Sterling Kelbaugh, Albert Zentz, and many more. Their reminiscing provided interesting, humorous, and poignant insights into the events that have shaped today’s Thurmont. A recurring theme was the overall sense of community and scenic beauty that have characterized Thurmont since it was founded. Interviewee Margaret (Bruchey) Krone spoke of her arrival in Thurmont that, “We felt that we’d moved into Heaven.”

Fine local wine and excellent fare—served by the Carriage House Inn—were provided during intermission. Chris gave an excellent talk on the making of the program and was presented with a Certificate of Appreciation and the first-ever awarded “Frederick County Oscar.” It was well deserved! At the conclusion, Thurmont Mayor John Kinnaird, said, “This is a proud moment for the town of Thurmont and it’s an excellent film. I recommend everyone see it at the first chance possible.”

The documentary is a valuable and priceless film that collects and preserves our local area’s history, trials, tribulations, and ups and downs for future generations. The Almost Blue Mountain City DVD will be available for purchase for $25.00 at the Creeger House during the Christmas in Thurmont celebration on Saturday, December 6, 2014, and for the Museums by Candlelight Tour the following Saturday, December 13. Stop by between 9:00 a.m. and 5:00 p.m. on either day.