The History  of Sabillasville Schools

By TheCatoctinBanner.com On July 29, 2022 · Add Comment · In Featured Articles

The early settlers knew the value of education. After Sabillasville was laid out, a log school house was built at the western end of the village. School was maintained there for some time, the building was also used for public meetings and church services. Some of Maryland’s greatest men made addresses in that old building. After the stone schoolhouse was built, on the then-Wagaman farm, this log house was used as a residence, and the post office was kept there at two different times.

A Record Herald article tells of the 61-year history of Mr. Earl Eby (1886-1994) working at the polls in Hauver’s District, Frederick County. Mr. Eby and his wife, Mabel, owned Eby’s Grocery Store in Sabillasville. He recalled the first election he attended, around 1907. In those days, votes were hand-counted under the eyes of party watchers. When he joined the election board, elections were held in the log schoolhouse at Deerfield.

Foxville Elementary School, built in 1924, was closed in 1961. The 60 students enrolled there were transferred to Wolfsville Elementary School until a suitable facility could be provided for the Sabillasville-Foxville area.  The former building at Sabillasville, erected in 1927 with an addition in 1934, housed 140 students through the close of the 1964-1965 school year.  Because of the limitations of the basic building, many services, which had come to be regarded as necessary and desirable, were unavailable to these students.

The present Sabillasville Environmental School was the culmination of years of work and hope for residents of the area. Actually, two former elementary schools were immediately represented in the area served by the new school.

It was with great enthusiasm, therefore, that residents of the area greeted the announcement that a new school would be built. Construction began July 20, 1964. In September 1965, the new school opened with an enrollment of 240 students.

The $640,000 request was approved by County Commissioners on July 6.  Fifteen and one-tenth acres of level farmland were purchased by the school board in August and September of 1963 from Mrs. Ruth E. Lewis, Mr.  & Mrs. Ralph Miller, and Mrs. Grace A. Lantz, all near Sabillasville, for a total of $12,872. The badly needed school is slated for completion before the 1965-1966 school year begins.

In 1927, a brick school building was built on the eastern side of Sabillasville and housed 140 students through the 1964-1965 school year.

The badly needed new school was built on 15 acres of farmland and opened in September of 1965 with 240 students. 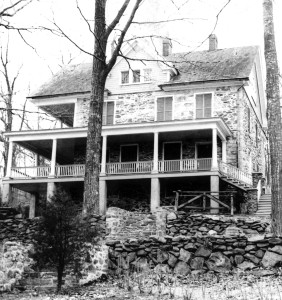 When the mail train from Baltimore stopped in Thurmont on Halloween, more than the mail was delivered. George F. Schultz, a sixty-two-year-old employee with Maryland Health Department, left the train. Schultz hired Clarence Lidie and his taxi to give him a ride to the Valley View Hotel, which was ten minutes away on the side of Catoctin Mountain.

As Schultz climbed into the car, Lidie noticed that he was carrying a .38-caliber revolver and remarked on it.

“Shultz laughed and remarked that ‘he didn’t know what he might run into,’” Edmund F. Wehrle wrote in a study about the history of Catoctin Mountain Park.

The Valley View Hotel was actually a summer boarding house, which had been run by Bessie Darling, a forty-eight-year-old divorcee, since 1917. It was a large house built in 1907 that sat on a steep tract of land near Deerfield.

Darling, a Baltimore resident, had purchased the property from Mary E. Lent after Darling’s divorce in 1917.

“She generally managed the hotel in the summer and returned to Baltimore in winter, where she used her considerable social contacts to drum up summer business for her hotel,” Wehrle wrote. “Her skill at cooking and baking, as well as the scenic site, helped build her a solid clientele.”

In the early twentieth century, people took the Western Maryland Railroad from Baltimore to Pen Mar Park to enjoy the cooler mountain temperatures and to get away from the stresses of the city. Such was the appeal of the Catoctin Mountain area as a summer retreat that visitors always needed a place to stay.

“These such boarding houses offered the women of the area a rare opportunity to operate businesses,” Wehrle wrote.

Schultz had known Darling since 1926. They had become so close that Schultz had even spent Christmas 1930 with Darling’s family. Newspaper accounts at the time said they were romantically linked, and he often spent weekends at the hotel while Darling was there.

Darling, who was fourteen years younger than Schultz, met a lot people, both men and women in her work. In the summer of 1933, Schultz had become convinced that Darling was seeing Charles Wolfe, a sixty-three-year-old man who had lost his wife a year earlier. He also lived in Foxville, much closer to the boarding house than Baltimore. (Wolfe later told the Hagerstown Daily Mail that he and Darling had been little more than acquaintances.)

The thought of Darling with another man made Schultz angry, and he was known for his displays of temper.

“One Thurmont resident remembered that Schultz frequently drank, and, on one occasion, assaulted Darling during an argument in front of the Lantz post office,” Wehrle wrote.

While Darling forgave him that time, she was not so forgiving in this instance. Schultz and Darling got into a loud argument apparently over Wolfe, which ended when Darling left the hotel. She went to a neighbor’s home to spend the night, and told the neighbor that Schultz was no longer welcome in her home, according to newspaper accounts.

Around 7:00 a.m. on Halloween morning, Schultz came up to the rear entrance of the hotel as Maizie Williams, the eighteen-year-old maid, was coming out for firewood. Schultz demanded to see Darling. Williams said Darling was in her room and tried to close the door on the man.

Schultz forced his way inside. Williams hurried upstairs to Darling’s bedroom to warn Darling, with Schultz following. Williams entered the bedroom and locked the door behind her.

This didn’t stop Schultz for long. He forced the lock and opened the door. Then he entered the bedroom and shot Darling who fell to the floor dead.

Schultz then calmly told Williams to make him coffee. She did, and when he finally let her leave the house to get help for Darling, he told her, “When you come back, you’ll find two of us dead.”

Williams rushed out of the hotel to the nearest home with a phone. She called Frederick County Sheriff Charles Crum who drove to the hotel with a deputy around 9:30 a.m.

They entered through the basement door, because Schultz had locked all of the doors and windows. When they entered the Darling’s bedroom, they found her lying dead at the foot of the bed.

They also found Schultz nearly dead from a self-inflicted gunshot to his chest. Crum brought Dr. Morris Bireley up from Thurmont to treat Schultz, who was then taken to the hospital in Frederick.

Once Schultz recovered from the wound, he was tried for murder on March 13, 1934. The prosecution called twenty-six witnesses in their case of first-degree murder. Schultz claimed that Darling had also had a pistol, and his killing her had been an act of self-defense. The jury deliberated an hour and found him guilty of second-degree murder; Schultz was sentenced to eighteen years in the Maryland State Penitentiary in Baltimore.

Wehrle recounted the story of Charles Anders, who had been in the courtroom when Schultz was sentenced and, sixty-six years later, still remembered watching Schultz sob as the verdict was read.

The drama of the murder fed into the tabloid-style journalism of the day, and people followed the case with interest.

“Even today, the murder stirs an unusual amount of residual interest,” Wehrle wrote.

Most recently, the Thurmont Thespians performed an original musical based on the murder case.