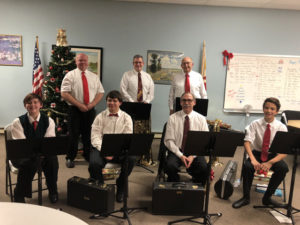 Since its beginnings in 1946, the Emmitsburg Community Chorus has continued to be a non-auditioned chorus, consisting of members who love music. The chorus remains viable in the community, having sung at various events throughout the years. In the early years, the chorus presented Handel’s Messiah for their Christmas concert each year. On January 7, 1967, they presented their Christmas Concert at Fairfield Lutheran Church; on December 21, 1969, at St. Joseph College Auditorium. In 1970, the Emmitsburg Community Chorus did a Haydn concert. Other more notable participation events were: January 3, 1971, Eucharistic Sacrifice Mass for 150th anniversary of the death of “Blessed Elizabeth Ann Seton.” The state of Maryland declared January 4th “Blessed Elizabeth Ann Seton Day.” Also in January 1971, the chorus participated in the Mass celebrating the Bicentennial of the birth of Blessed Elizabeth Ann Seton.

The highlight of the chorus throughout the years has been singing at the Canonization of Elizabeth Ann Seton at St. Peters Basilica in Rome, September 1975, of which several of our current members was able to be a part.

Other significant events of the chorus over the years include the 41st International Eucharistic Congress in Philadelphia, Pennsylvania in 1976; Interfaith Bicentennial Celebration at the Basilica of the Sacred Heart in Conewago, Pennsylvania; New Year’s performance for the Celebration of Frederick County 250th anniversary at Winchester Hall in Frederick in 1998. Christmas 2004, the chorus recorded a rendition of “Go Tell It On the Mountain,” which aired on Key103. In June 2007, the chorus performed at the Frederick Festival of the Arts, and most recently, the chorus participated in the Mass celebrating the 40th anniversary of Sainthood of Elizabeth Ann Seton.

The chorus is one of many groups that perform annually at the Night of Christmas Spirit at the Carriage House in Emmitsburg—at least the last twelve years. Through the years, the chorus has participated in the ecumenical Easter Sunrise Service at the Grotto, even before the Glass Chapel was there. Until recently, the chorus sang often for the annual Emmitsburg Lions Club July 4th celebration.

Over the years, the chorus has sung classics, opera, Broadway, folk, spirituals, novelty, sacred, and a little jazz. The chorus has selected music from each of the decades to present in their Christmas Concert celebrating their fiftieth anniversary, which will be held on November 27, 2016, at 4:00 p.m. at the Basilica of Saint Elizabeth Ann Seton. Following the concert, there will be a time of fellowship with a light reception and memorabilia display.

The thirty-four member chorus has several long-time members singing in this concert. The chorus is hoping many former members will come to the concert to sing along with the Hallelujah Chorus, which will close the concert.

Peggy Burrier Flickinger is the current director of the chorus. She graduated from Shepherd College in Shepherdstown, West Virginia, with a degree in vocal music performance, and she is starting her tenth year directing the chorus. Lisa Mattia is the current pianist for the chorus. Lisa received a B.A. degree in music education and a B.S. degree in business administration from Shepherd College in Shepherdstown, West Virginia, followed by dual Masters in business administration and arts administration from Southern Methodist University in Dallas, Texas. She is starting her ninth year as pianist for the chorus.

For more information about the chorus, please contact Betsy Graham, the chorus president, at 301-898-7821.