Catoctin High School (CHS) recognized its graduates who have gone on to find success post-high school during its 6th Annual Distinguished Graduates Induction Ceremony in November 2021.

Principal Jennifer Clements told the audience, “Catoctin High School is a place of deep roots and strong traditions. Our history is so rich because of the incredible staff and students who have walked these halls, making a positive impact on our school and our community.”

Former teacher, John Koepke, taught, coached, and advised students at CHS for 35 years. During the program, he passed on some advice from his father to the students in attendance. “Life is full of cool moments. Enjoy the cool moments.”

He also shared some advice from Dr. Jack Graham, a Texas pastor, and it was to PACE yourself through life. However, Koepke added his own words for the acronym.

Rebecca Chaney, Class of 1982, was the arts and entertainment inductee. She is an author, speaker, and livestock and dairy judging coach. Her twin daughters, Sheridan and Rianna Chaney, who are seniors at CHS introduced their mother.

“You need to remember to dream big,” Cheney told the students. “Never waver from your dream and goals. With hard work and determination, you can achieve incredible things in this life.”

Brian Haines, Class of 2000, was the academics inductee. He is currently an assistant principal scientist at Merck, working in regulatory affairs.

He told the students not to give up on their goals. However, you need to work to make them happen. “Dig in just a little harder and not give up after setting a goal,” Haines said.

Maria Smaldone, Class of 2010, was the public service inductee. Her professional career has been spent in social work, and she is currently the senior neighborhood resource coordinator at Neighborhood Housing Services in Baltimore. Her sister, Raphaela Smaldone, a CHS senior, introduced her.

She said, “My normal is probably not your normal…considering someone’s context (their normal) is critical to understanding their thoughts, their feelings, and their motivations.” She added that this understanding will help bridge “trust gaps” between people of different backgrounds. She urged the students to get to know someone with a different normal and listen to them and learn from them.

Curtis Howser, a former industrial arts teacher and school counselor for 44 years, was another former CHS staff inductee. He served as a counselor at CHS for 18 years.

He said. “Be part of the solution rather than someone who just talks about it.”

AIM stands for Academics, Integrity, and Marksmanship. It’s the youth program for the ATA (Amateur Trapshooting Association), a national and worldwide program. “This is a sport,” explained Maryland AIM Director, Chuck Farmer, “and it’s the safest sport you can play. Safety is built into the program, so there aren’t accidents. It builds the responsibility, respect, and discipline that carries on to everything else in life. That’s what sports are really about, and ALL that shooting sports are about- and it’s FUN!”

Farmer took the lead when the AIM program was moved to Thurmont two years ago. Dick Hughes had run the program for many years at Harvey’s Cedar Gun Club near Baltimore but turned it over to Farmer as the new director when his attention shifted in other directions.

In Thurmont, Farmer has appreciated the many volunteers who have stepped forward to create an active committee of support. Older trapshooters, members of area sportsman’s clubs, Frederick County Sheriff Chuck Jenkins, and other professional adult volunteers dedicate time and effort to the annual event. He said, “It’s a good thing to have it here in Frederick County.” Now, a non-profit Maryland State AIM committee has been formed. “It’s all about growing the youth programs,” he added. “We’d like to expand to make Frederick County the central hub in Maryland for all youth-shooting sports, including sporting clays, skeet, five-stand, trap, and the pistol and rifle shooting sports.”

On June 12, 2021, AIM members hosted the Maryland State AIM Championship at the Sportsman’s Club in Thurmont. Four age groups comprise the AIM program: Pre-Sub (11 and under); Sub Junior (12-14), Junior 15-18, and Junior Gold (up to age 23). The day after this shoot, the Pennsylvania State AIM Shoot was held in Elysburg, Pennsylvania. Farmer said, “It’s a state competition, but you’re really competing against yourself. You’re earning targets to go towards the bigger contests. That’s why you’ll see youngsters side-by-side with adults while competing and everyone competes on their own level and ability. The best part is that anyone can participate- even if you are in a wheel chair.”

Grand American Nationals are coming up from July 30 to August 3 in Sparta, Illinois, with shooters from countries all over the world. At that event, there will be Olympic shooters, professional shooters, youth shooters, and more.

Farmer shared, “We probably have already 15-20 from the area’s new high school clay target team (Frederick Stars & Stripes) that are interested in going to the National event. The Grand American is rich with history with many people who participated over the years such as Annie Oakley, Roy Rogers and John Philip Sousa.” The Grand American at the World shooting Complex is the largest shooting competition in the World with a trapshooting firing line  over 3.5 miles long. The World Shooting Complex is also the current home of the Trapshooting Hall of Fame Museum and worth a visit if in the area.

Brian Ferris, Director of a new program in West Virginia, will host their first State Shoot in Winchester, Virginia, July 10 and 11, trying to model after Maryland’s AIM program.

AIM members may go to any local gun club, or even visit another club to shoot while on vacation. The kids are the future of their clubs and of the sport. The Thurmont Conservation & Sportsman’s Club (TCSC) hosts frequent shooting opportunities. If someone would like to make a contribution to AIM or the Club, they can do that.

Vice President at TCSC, Jeff Plum, is also the Thurmont Sportsman’s Club’s pool chairman. He said, “The pool is open,” and encourages membership at the Club.

Special thanks also to the event’s caterer, Mission BBQ, and Rita’s Italian Ice who provided the treat trailer.

Maryland AIM Director, Chuck Farmer, explains the rules and process of the Annie Oakley competition during the MD State AIM Championship on June 12, 2021.

Shooters rotate turns and positions in groups of up to five per squad. 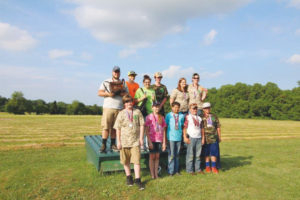