On Saturday, April 16, 2016, over 275 little league players, from the ages of four through twelve, will take the fields for Thurmont Little League’s (TLL) 65th season of baseball. The day will begin at 9:00 a.m. with the first round of games, followed by an Opening Day Ceremony at 10:15 a.m. The Board of Directors would like to invite the entire community to celebrate the beginning of the 2016 season and reflect on sixty-five years of baseball history.

The TLL Opening Day festivities will include a Kid’s Fun Zone with several games and activities, raffles, 50/50 drawings, ice cream, and more—a love of baseball and a celebration of the community.

“Our opening ceremonies are always a wonderful day to celebrate our players, parents, and volunteers,” said Ed Lowry, TLL president. “This year is an extra special year as we celebrate Thurmont Little League’s 65th season of baseball. We’re excited to kick off our new season and look forward to a great year of baseball.”

Little League has provided communities around the world the opportunity for families to connect, and for children to come together in a healthy, safe environment to learn the values of team sports and the fundamentals of baseball. Thurmont Little League is proud to be able to provide this opportunity to our community for sixty-five years and continue to be one of the largest youth sports association in the Northern Frederick County area.

It will be a great 2016 season at Thurmont Little League; please mark your calendars for Opening Day on Saturday, April 16. Check us out on the web at www.TLLbaseball.com or visit us on Facebook @ThurmontLittleLeague or on Twitter or Instagram @theTLLnetwork.

The Junior Varsity Lady Cougars recently completed the 2015-2016 season. Despite being in a new conference and playing a very tough schedule, they finished with a record of thirteen wins and seven losses. This included wins over Urbana, Walkersville, and Governor Thomas Johnson. Coaches Rick and Sara Wastler would like to thank the girls for their hard work to make this a successful season.

Catoctin High School (CHS) Sports Boosters has added a “Wall of Honor” Banner in the gymnasium to recognize individuals who have gone above and beyond the normal parent or fan support. The first two names on the banner are William “Buzz” Barker and Bernard “Bun” Wivell. Each in his own way has been a tremendous asset to the Sports Boosters, a sports program at CHS, and they both have been equally as generous with youth programs.

Mr. William “Buzz” Barker passed away on November 23, 2015. Buzz was a Frederick County Basketball referee for eight years in the late 1970s and early 1980s. He volunteered for thirty-three years with both the girls and boys basketball programs, keeping the clock for over 1,300 games. He helped with the “chain gang” for football games, helped with timing events at track meets, and umpired at little league games over the years.

His family has created the “Buzz” Barker Scholarship Fund in his memory through Sports Boosters. Accepting the “Wall of Honor” recognition for William “Buzz” Barker were daughter Gwenae Wachter and husband Jerry and daughter Krista Kae Hazen and husband Matt.

Mr. Bernard “Bun” Wivell is the Treasurer of the Rocky Ridge Volunteer Fire Company and has held that position for forty-three years. He was chosen because of all the support over the years to CHS Sports Boosters, youth programs, and fees for families in distress through the Michael L. and Douglas A. Wivell Memorial Fund. One of the first big projects was the clothing shack down at the Football Stadium; filling a need for a place for students to purchase apparel and miscellaneous items to promote school spirit, the “Clothing Shack” was born.

Pictured from left are Gwenae and Jerry Wachter and Matt and Krista Kae Hazen, accepting the “Wall of Honor” for William “Buzz” Barker; and “Wall of Honor” Inductee, Bernard “Bun” Wivell.

Catoctin High School Girls Basketball invited alumni to be their guests at the basketball game on February 2, 2016.

There was a very nice turn out for the first year, considering the date had to be changed due to inclement weather. Alumni were introduced at the break between the JV and Varsity games. A brief reception was held after the Varsity game, and everyone enjoyed visiting with old friends.

Catoctin won its first-ever League tournament championship, taking jayvee honors in the “A” championships. This is the first time in the history of Mid-Maryland Basketball that a Catoctin team has won the league championship tournament. They are very proud of their players. 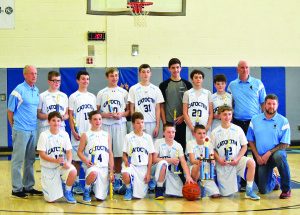 The Catoctin High School (CHS) Softball Team will hold a Crab Cake Dinner Fundraiser on Saturday, April 2, 2016, at the American Legion in Thurmont, from 4:00-7:00 p.m. Dinner will include two crab cakes (a Vigilant Hose Company specialty), baked potato, green beans, coleslaw, roll, drink, and your choice of a dessert. The cost is $15.00 per dinner (eat in or carryout). You can purchase tickets from any CHS softball player or call Coach Jess at 301-788-0976 to hold your tickets at the door. All remaining tickets will be sold at the door until dinners are sold out.

The 10U Catoctin Baseball Club (CBC) traveled to the Durham, North Carolina, metropolitan area over the weekend of March 18-20, 2016, and were named the Champions of the AAU Super Regional tournament, outscoring their opponents 53-25 over five games.

Over the course of two days, the 10U CBC went five wins and zero losses, competing against teams from Virginia and North Carolina, to claim the tournament championship. One of the highlights of the tournament came in the semi-final round with CBC trailing Elon Phoenix Baseball Club. Down 5-0, Joe McMannis belted a grand slam to put the game in reach. In the bottom of the last inning, Brad Butts singled to tie the game up, and Peyton Castellow’s “walk off” single clinched the game for CBC. Catoctin Baseball Club went on to beat 4G3 Baseball Academy (Greensboro, NC) 17-9 in the championship final.

The team celebrated their last practice by bringing in non-perishable food items to donate to the Thurmont Food Bank. These young people have learned that they can bring teamwork outside of the court and into their community. CYA would like to thank the Sharks’ players and their parents for all of their support.