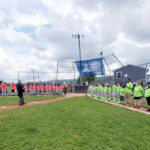 It’s hard to believe another season at Thurmont Little League (TLL) has nearly come to an end. Despite the weather being unpredictable at times, it’s been another fun and successful spring! There have been lots of big events around the complex as of late, beginning with our first-ever District 2 Softball Mixer. We were lucky to have a rare, beautiful Saturday, as the league played host to 12 teams from multiple districts, spanning from Hancock to Lower Montgomery County. The TLL concession stand was rocking, serving up delicious treats to all the visitors, along with The Sauced Savage and Kona Ice. We received a lot of compliments about our facilities and how well-run the event was, and we can’t wait to host more of these in the future. A big thank you to everyone who contributed to making this event a success.

On Saturday, May 14, TLL held its annual hit-a-thon fundraiser. This is the largest annual fundraiser for the league, and proceeds go towards necessities like field maintenance, uniforms, concession upgrades, and general complex improvements. With the addition of our new softball program this year, as well as a record number of registrations, expectations were high that last year’s record-breaking total would be surpassed. Our TLL families and the surrounding community did not disappoint. This year’s hit-a-thon brought in nearly $28,000 in online and cash donations, the largest amount raised in league history! The hit-a-thon is an extremely fun event for our players. Players receive one hit for every $10.00 raised (for a maximum of 10 hits). They can continue to raise additional money in order to win prizes. A bonus hit is also awarded if a player brings a non-perishable item for the Thurmont Food Bank. Prizes are awarded to the top overall fundraisers and also to the players who hit the ball the longest distance. The major and minor divisions are judged on where the ball lands, while the softball, instructional, and t-ball divisions are given credit for how far the ball rolls.

The overall fundraising winners this year raised some of the highest totals in event history. Congratulations to the following winners: Carson Unger (T-ball Royal Blue)—$1,400, Ethan Smith (Minors Brewers)—$850, and Maverick Cox (T-ball Vegas Gold)—$750. They will each be awarded an Amazon gift card for their prize. In addition to the individual winners, the teams with the most overall donations earn a free pizza party at the end of the season. Highest earning teams were: T-ball Vegas Gold—$2,145, Instructional Wolf Pack—$1,997, Minors Brewers—$1,810, Majors Cubs—$1,707, and Minors Softball Outlaws—$1,214. Along with the close to $28,000 raised, the league also collected several hundred non-perishable goods, which were donated to the Thurmont Food Bank to help those in need. TLL would like to thank the community, parents, and volunteers for their support. Without you, this event would not have been such a tremendous success.

The spring season is winding down, with games concluding in early June. We will then move on to the end of the season tournaments and All-Star games. Look for more information in next month’s issue!

Players line the field during opening ceremonies of the Thurmont Little League’s 2022 season.