It was a long time coming, but a new Mr. Catoctin was chosen on April 5, 2018. Scott Little earned the title after displaying talent, creativity, and an ability to fundraise for Catoctin High School Safe & Sane at the 6th Annual Mr. Catoctin Pageant.

“The experience was pretty awesome, and, obviously, I’m pretty excited about being chosen,” expressed Little.

The event had originally been scheduled for March 2, but it had to be postponed twice: once for wind and once for snow. However, the delay didn’t dampen the enthusiasm of the crowd and the competitors in the Catoctin High School Auditorium on a Thursday evening.

Besides Little, Corbin Deviney, Cameron Hewitt, Matthew Imes, James Kempisty, Sean Miller, Noah Olson, and Noah Wivell had been selected by teachers to compete. Mr. Catoctin is not a beauty pageant, bodybuilding competition, or talent show. It is a fun event to raise money for Catoctin Safe & Sane, on organization that works to help seniors have a safe and fun prom, without drugs and drinking.

“I was originally supposed to have twelve back-up dancers,” Little said. “But with the delays, people had to drop out because of sports and other things; I had to make things bigger and better.”

Little explained that he had started planning his talent number very early because of the choreography he wanted.

The weather delays made him both more anxious and more excited about performing, but Little didn’t disappoint as he made his spotlighted entrance from the back of the auditorium to join his dancers on the stage. 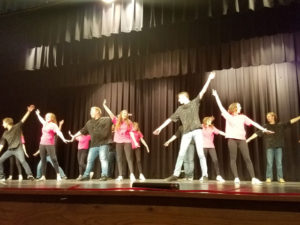