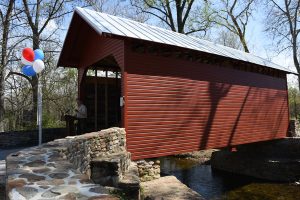 The Roddy Road Covered Bridge is a coveted link to our local history in Northern Frederick County. It is one of three historic covered bridges in the area, along with Loy’s Station and Utica bridges. The forty-foot-long single-lane structure was originally built in the mid-1800s.

Last June, it was struck and partially carried away by a box truck. The resulting damage made the bridge unsafe, so it had to be closed. Repairs to the bridge began in October and were completed by Dean Fitzgerald’s Heavy Timber Construction, Inc., in cooperation with the Frederick County Department of Public Works and Frederick County Department of Parks and Recreation.

While the bridge was closed, Frederick County took the opportunity to re-route Roddy Creek Road away from Roddy Creek in order to open space for a new park that includes a playground, walking trail, bathroom, parking area, and a (future) bridge-like pavilion. They also took action to prevent future damage to the bridge by installing a passive over-height warning system that a too-large-to-pass-through-the-bridge vehicle will hit before getting to the bridge.

Several Frederick County officials and staff came out to celebrate the reopening of the bridge and park on Monday, April 17, 2017. Frederick County Public Works Director Chuck Nipe welcomed guests. He extended sincere appreciation to the residents who attended public meetings and provided recommendations about how to avoid future bridge damage incidents. He also thanked several entities, including Jeff Yokum, the bridge neighbor who provided land for the turnaround at the bridge; Fitzgerald Heavy Timber Construction, Inc. employees who rebuilt the bridge; HMF Paving employees who were instrumental in the apprehension of the individual who damaged the bridge; Frederick County Highway Bridge Construction Crew, District 1 Crew, and the sign crew who fabricated and installed the signage and protective devices; Frederick County maintenance personnel who completed the electrical work; and the Transportation Engineering staff who coordinated the project and the reconstruction efforts.

Frederick County Executive Jan Gardner said, “In Frederick County, we are passionate about our historic covered bridges.” She talked about the historic significance of the bridge, and thanked all parties involved in its reconstruction and the formation of the surrounding park.

Dean Fitzgerald, president of Fitzgerald’s Heavy Timber Construction, Inc., the contractors for the project, shared his memories of playing in the creek and on the bridge as a youngster. He said that at a young age he never imagined he would have a part in its reconstruction. He reminded us that we must continue to be vigilant about our covered bridges and our community. “These are blessings we don’t even realize we have.”

Dean remembered Shaeffer Bailey. Bailey was the bridge neighbor who lived in the brick house nearby, and the man who gave the land to Frederick County for Roddy Road Park. He was vigilant in protecting the bridge, taking Dean to task [and surely others] when he was caught throwing mudballs at the bridge. Bailey rallied the community to put the bridge back together in 1992, after it received damage. At the time, it took two days work for community volunteers to repair the bridge.

Dean announced that his company is partnering with Frederick County Parks and Recreation to construct a pavilion. “We want it to be similar to the covered bridge and potentially use some of the timber that was salvaged from the original bridge. The community is invited.”

Jeremy Kortright coordinated the cutting of the ceremonial ribbon. “This is an exciting day for the community,” he expressed, and thanked the parties involved in the restoration of the bridge.

Thurmont Mayor John Kinnaird, reminded us that the bridge opening is eight feet, six inches tall and not every vehicle is going to fit through that opening.

Once the ribbon was cut for the bridge’s official opening, the first to pass through it were people on foot, followed by bicyclists. The first vehicle through was a Chrysler minivan driven by Thurmont resident, Joe Eyler.

Dean Fitzgerald, president of Fitzgerald Heavy Timber Construction, Inc., the contractor for the bridge repair project, is shown as the sun shines on the beautifully completed bridge. 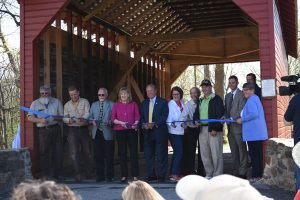