By TheCatoctinBanner.com On December 30, 2015 · Add Comment · In Sports News 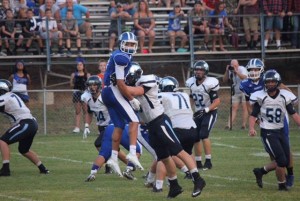 Catoctin High School Senior, Payne Harrison, has been tearing up the turf on football fields all over Maryland. After completing his final season with the Catoctin Cougars, he was selected to play in the first annual East West All Star game, along with his team mates Braden Thomson and Noah Dell, hosted by the Baltimore Touchdown Club on December 12, 2015, at Spaulding High School in Severn, Maryland. He then played in the Maryland Crab Bowl at McDaniel College in Westminster, Maryland on December 19.

According to Catoctin’s Varsity Football Coach, Doug Williams, Payne is only the second CHS football player to be invited to play in the Crab Bowl All-star game. It’s very hard to be invited as only the top players in the state of Maryland are selected.

About Payne, Coach Williams said, “But best of all, he is an outstanding person whom I will miss being around.” 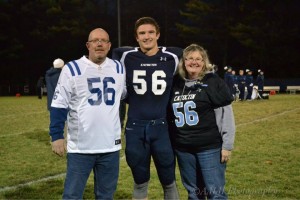 Payne is a great student with a 3.69 grade point average, his weighted GPA is 4.19. He loves football and has been playing since age six. He played Catoctin Youth Association (CYA) football, and has played on Catoctin High’s team for four years.

He is an accomplished wrestler for Catoctin as well. He wrestled in the 220 pound heavyweight class as a junior, often wrestling opponents who outweighed him. He qualified to wrestle in the state championship tournament in 2014.

Payne plans to attend a four-year university and study Exercise Science while playing football at the collegiate level.