James Irvin Spalding, life-long resident of Thurmont, passed away peacefully in his home on May 19, 2014, at the age of seventy-five. He was the loving husband of Ellen L. Sutton Spalding for twenty-three years.

Born January 23, 1939, in Thurmont, he was the son of the late Charles “Hamp” Spalding and Helen M. Gourley Spalding. Jim served in the United States Air Force for four years. He worked for the Maryland State Highway Administration as a Maintenance Foreman for thirty-four years, and earned—along with his father, Charles “Hamp” Spalding, and brother, Don Spalding—a family accolade for 109 of combined service to the organization (Jim worked thirty-four years, Don worked for thirty-seven years, and Hamp worked for thirty-eight years).

Jim was an athlete. At Thurmont High School, he played soccer, basketball, and baseball. In 1956 and 1957, his team won the Frederick County Championship for basketball. He loved to dance and was good at it. He loved to have fun, tease people, and laugh with them. He loved to cook and have his family for Sunday and holiday dinners. He helped the fire company in preparing food for different events. He was involved with family functions and the community. On most days, he would wake early and set the coffee on for his wife, Ellen, then set about making his rounds to Bollinger’s Restaurant, to Shuff’s Meat Market, to Hobb’s Hardware, and, sometimes, to Timeless Trends, before setting back home. He was a father that never missed an event, ball game, outing, party, or celebration, and most of the time, he was the first to arrive. He didn’t promise to be there, HE WAS THERE!

Jim made sure family and friends came together for one of his favorite activities: butchering. He guarded his recipes for pon haus closely, and only shared the recipes with a few select individuals, imparting the knowledge slowly and sometimes without their knowledge. Those who had the privilege of tasting his recipes know that his are some of the best.

Jim’s daughter, Kathy Hovermale, said, “He taught me so many things, and I have a lot of funny stories I could tell you about jokes he played on me.” One story she told was about Jim walking her down the aisle on her wedding day. She recalled, “When it was just him and me in the back of the church, he kissed me, told me he loved me, then kicked the side door open and said, ‘Last chance—we can run; I’ll go with you!’” Jim found Kathy and her husband, Keith, a house that turned out to be right up the street from Jim’s house in Thurmont. Kathy said people thought she was crazy moving so close to her family. Kathy said that since moving in, “I needed them [Jim and her mother, Ellen] a thousand more times than they ever needed me. I ate their food, sat on their porch, and spent more time there bothering them than the other way around.”

Jim’s niece, Diane Miller who passed away in September of 2016, said, “We talked on the phone every day, and some days two, three, or four times, depending on what was going on. I had to keep him updated on what was going on around the farm.” She recalled his relationships with the farm animals, saying he wasn’t too fond of cats, but was very involved with all aspects of the farm. She recalled him often asking what she was going to do when he wasn’t around to help with it anymore. Diane said, “I know it’s not realistic, but I never thought that day would ever come.”

An ornery youngster, an elementary school teacher of Jim’s wrote on one of his report cards that he, “had a rather happy-go-lucky attitude about it all.” For all who knew him, that described him well. He made friends wherever he went, even befriending a lady who had mistaken him for “Steve” during a rest on a bench in a Walmart. 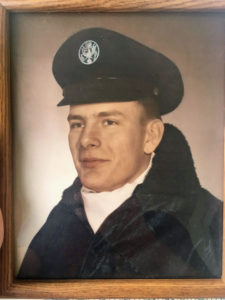