Stew & Soup: The Interview Looking Back

Born at Annie M. Warner Hospital in Gettysburg, Pennsylvania, in June of 1947, was a son to Paul E. and Ida G. (Brawner) Humerick. They named him Paul Joseph and gave him the nickname “Sonny.” Paul and Ida took Sonny home to Emmitsburg, where they resided in a house on North Seton Avenue. This is where Sonny spent his entire childhood. He said it was the best of all places to grow up. Right below his house ran Flat Run creek, where he and his friends could go wading and fishing, and there were nearby woods to hunt mushrooms. They had many fields to run and play in. All-in-all, Sonny had a very happy childhood growing up in Emmitsburg.

Sonny said he had two very close friends that he grew up with: Mike Shorb and Billy Weidner. Sonny had a part-time job during the summers mowing grass out by Natural Dam and helping his dad mow at the Sharpe farm. This gave him a little spending money, and Sonny, Mike, and Billy could hardly wait until the week’s end to go and listen to Wayne Sanders’ band play some rock and roll music. Wayne Sanders had a rock and roll band called “Dwayne and the Sounds” and was the hometown entertainment; they had a lot of local followers. When Sonny turned sixteen, he was at the Tropical Treat in Taneytown, where Dwayne and the Sounds were playing. There, he met Linda Wetzel; and, although he knew Linda’s brother, he did not know her. They hit it off that night, and that marked the beginning of a fifty-four-year relationship, married fifty-one of those years. They got married the April 15, 1966. Sonny says he kinda took a “liking to her” and she kinda took a “liking to him.” I would think it was kinda more like a “loving to each other.” What do you think?

In February of 1966, Sonny got a notice from the Draft Board to report to Fort Holibird in Baltimore. Sonny, Denny Staley, and Leroy Shealey were all on the bus to Fort Holibird. Leroy passed the physical, but Sonny and Denny did not. So, they put Sonny and Denny in a big room—about the size of two basketball stadiums combined—and a sergeant came in and walked up and down and looked them over and said, “I’m going to tell you right now, you have thirty days to take care of any business you have, because the Army has you.” Well, Sonny and Linda had plans of getting married in April; they also had a piece of ground cleared and were planning on building a house. When Sonny got home from Holibird, he told Linda and his mom and dad that he had been drafted and he was going in the Army; it wasn’t his choosing but that was the way it was. Sonny said that a few weeks later he received some papers from the Navy, Air Force, and Marine Corps that said “congratulations, you were accepted in the military.” He explained that the Marine Corps had a ninety-day plan, and that meant that if he joined, then he wouldn’t have to go for three months. That meant one thing to Sonny: he could still get married. So, Sonny and a friend of his, Johnny Eckenrode (who worked with Sonny at the Provincial House), decided to go to Frederick and join the Marines. The recruiter sent them back to Fort Holibird for another physical and, from there, they were sent to Gay and Lombard street to be sworn in. That was on the March 3, 1966, when he became a Jarhead, and he was going to wait to get married in April. Johnny didn’t want to wait, so he volunteered for Vietnam and went in right away. When it was time for Sonny to leave, he went from Baltimore to Georgia, and then arrived at Parris Island on June 2, at 2:00 a.m. The drill instructor got on the bus and was talking to the driver and then turned to Sonny and the rest of the recruits. Sonny said you never saw such a commotion, with forty-five guys trying to get out of that little bus door at one time. Sonny remembers thinking to himself “What in the world am I doing here?” He made it through boot camp and got twenty days of leave, so he went home. After his twenty days of leave at home, he was sent to Camp Lejeune for Infantry Training; in the meantime, he had a MOS (Military Occupational Specialty) as a cook. He was sent to Camp Gardner and went through cook school. Sonny was then shipped to Camp Pendelton in San Diego, California, where he spent his entire Marine career; he was Honorably Discharged from there. Sonny got to visit several of his friends and relatives while at Camp Pendelton: his cousin, Jerry Wagerman; friend, Johnny Knott; friend, Jimmy Wastler; and friend, Phil Mort. Sonny and Linda never had a honeymoon, and he really missed her and his mother and father, so he was very happy to be going home.

After he arrived back home, he went back to work at the Provincial House, where he worked before he joined the Marines, and remained there for forty-seven years.

Sonny is now retired, and he and Linda are still living on the mountain and are very happy with their family-life. They have two children: Stacy and Stephanie. Stacy has a son and a daughter, Zachary and Samantha; and Stephanie has a son, Riley. Sonny regrets that his parents didn’t survive long enough to meet their great-grandchildren; he lost his mother in 1972 and his father in 1992.

Linda and Sonny still go to the Rock and Roll dances at the Ambulance Building in Emmitsburg. They are active and love to get out and about! So, if you meet them at Jubilee or anywhere around the neighborhood, say “Hi” and thank Sonny for his service.

I really enjoyed the little chat I had with Sonny and Linda. I tried to get Linda to put her two cents worth in, but she was not having any of it.

They are the perfect example of a very happy couple and family, who stay positive and enjoy their lives together 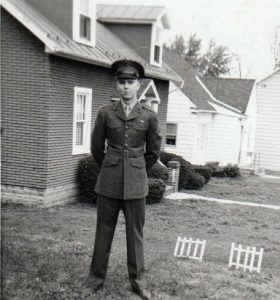