looking back— 1939 happily ever after

My Thank You and Explanation to All My Family, Friends, and Faithful Readers of my Catoctin Banner Column 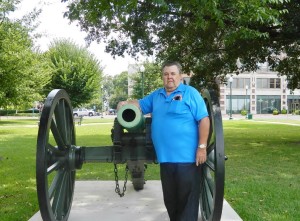 Thank you one and all for taking the time to read my column, which is dedicated to the Veterans in our local neighborhood communities and across this great land of ours. I am aware that quite a few of you know that I have been in the hospital, and I thank all of you for your prayers, as I greatly believe that the good Lord answered them and that is why I am able to write this today.

I had not been feeling well for quite some time, and was struggling from day to day just to keep myself moving. I was tired all of the time and found it hard to get my breath. I also had a hard time concentrating on things that used to be routine chores. I knew something was just not right, but I was putting in long days and long weeks, so I blamed it on that. I did a god job of fooling my wife, because I didn’t want her worrying about me, as she is not in good health. Well, I fought for as long as I could and, finally, when the severe headaches and sweats were at the worst, I asked her to call the doctor and make an appointment for me. She made the call and I had an appointment the following day.

I arrived at the doctor’s office at 9:30 a.m. and signed in, after driving the ten or so miles from my home with chest pain. The nurse came out to the waiting room and escorted me back to one of the examination rooms and started checking my vitals. My blood oxygen was at the bottom line; she said I had to get it back up, so I did some deep breathing, trying to get it to whatever level it should be. She took an electrocardiogram and it showed some inconsistency, so she called the doctor in. The doctor read the vitals and the printouts and said I needed to get to the Gettysburg Hospital emergency room. I wasn’t buying it, because I just wanted something to make me feel better so I could go home; I had too much to do. The doctor kept talking to me until I finally agreed to let Joan, my wife, drive me to the emergency room. I arrived and everything was already set up, so they brought me a wheelchair and wheeled me to a room. I got undressed, of course—if I would have had to sneeze, I would have had to undress. More vitals were taken and another electrocardiogram was done; blood was drawn after an IV was inserted in my hand. I laid there for what seemed like forever, and then the cardiologist came in and said the test showed irregular, and that they were admitting me for a stress test the following day.

That night, I was restless and, of course, the nurses were in and out all night taking my vitals and blood for testing. I could have nothing to eat or drink after midnight. Around 7:00 a.m., the cardiologist came in and explained that I could not do the treadmill and that they would inject radioactive medicine in my bloodstream to make my heart race. I was to have a set of pictures taken of my heart, and I had to lay flat on my back with my hands over my head. Then I would be taken to the waiting room for one hour, and then be taken to the stress test room and have the medicine injected into my blood while an electrocardiogram was taken. After, I was taken back to my room and given two slices of toast to wait another hour to be taken to have more pictures, the same as before. They came in and said the first set of pictures before the stress looked pretty good. Then came the news from the second set of pictures; I was told I had to be transported by ambulance to York Hospital to have a cath done, because I had blockage. They didn’t know how many or exactly where, but it was one of my main arteries. So, they loaded me into an ambulance that rode like a log wagon and hauled me to York Hospital. They took me to a room they had ready for me and started taking vitals and blood and everything I was getting so used to.

The next morning I was taken to the cath lab and prepped for the procedure. They took me in and transferred me to a big table with huge monitors above it and positioned me for the procedure. They said that I would soon be going to sleep and they were right, the lights went out. When I awoke on the table, I was amazed at how well I could breathe; and for going through the procedure, I thought “Wow, I feel peppy.” I was taken to the recovery room and had to wait until my blood was right to clot before they could remove the plug in my artery and put pressure on the cut to start the clotting procedure. When the nurses were done, I was taken back to my room for the rest of my recovery. The cardiologist came in and said I was very lucky to have gotten there when I did, because my right side main artery was 99 percent blocked, and they put some kind of special stent in.

The doctor came in when he was discharging me and looked me in the eyes and said, “If you don’t take your medicine as directed and don’t stay on your diet, the next time I see you, it won’t be for a stent or a heart attack, it will be me saying goodbye.” That scared me, and I think I will listen to what he said for the rest of my life.

I want to thank the staff at Gettysburg Hospital and York Hospital for all the professional service and all the kindness and gentleness they gave me for my entire stay.

I am so thankful for my professional internist, Dr. Ronald Krablin, who saved my life by having the skills to know I needed help and for talking me into following through.

I am planning to have a very good column next month and will be ready to hit the ground running.