Once A Cougar, Always A Cougar!

By TheCatoctinBanner.com On February 27, 2018 · Add Comment · In Sports News

Friday, February 9, 2018, was a big night at Catoctin High School, when the community gathered at the Lady Cougars’ final home basketball game of the season for a night of celebration and recognition, as graduating senior players were honored and tenured volunteers were recognized.

Prior to the start of the varsity game, during which the Lady Cougars played the Walkersville Lady Lions, the first senior recognized was Britney Murray. Britney managed the lady cougars varsity basketball team and was a part of the Just Dance Club her junior and senior year. After graduation, Britney plans to attend Frederick Community College.

The second senior recognized was Elizabeth “Lizzy” Anne Dougherty. Lizzy has been a member of the Catoctin High School basketball organization for all four years. In addition to basketball, Lizzy has also been a member of the softball organization for all four years. She participated in the “Catoctin Crazies” in the freshman, sophomore, junior, and senior class. After graduation, Lizzy plans to attend Frederick Community College, where she intends to play softball. She then anticipates on transferring to Frostburg State University to major in physical education and minor in coaching.

Gary Miller and Don Santos were also acknowledged for their long-time volunteer work with the Catoctin High athletic program. Both Santos and Miller were inducted onto Catoctin’s “Wall of Honor.”

Gary Miller has been an active volunteer with the football program for thirty-four years. During that time, he handmade helmet plaques for graduating seniors and has been the primary in-game statistician. Gary has also spent twenty-five years coaching both football and baseball for the Catoctin Youth Association program.

Don Santos has been the stadium announcer for Catoctin’s home football games for eighteen years. He not only announces the Friday night varsity home games, but also the junior varsity and ninth grade teams.

Two long-time coaches were also recognized that evening. John and Brenda Woelfel, who are relocating to North Carolina. They received a plaque from the athletic department that read “John and Brenda Woelfel: In appreciation to the both of you for your dedicated service to Catoctin High School. Once a Cougar, Always a Cougar. CHS ATHLETICS 2018.”

As the Wall of Honor is in its third year, previous inductees were William “Buzz” Barker and Bernard “Bun” Wivell (2016), and Mike Valentine and Denise Valentine (2017).

Congratulations to all of these dedicated Catoctin Cougars! The next time you visit Catoctin’s main gym, take a look on the wall where banners are hung to honor Catoctin’s state champion athletes, naming them, their sport, and the year they became champions. 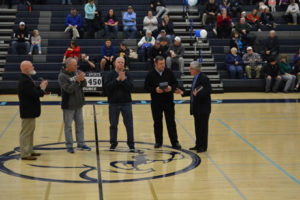