The weekend of October 10 and 11, 2015, featured cloudless blue skies and crisp fall temperatures, a glorious greeting for those participants who journeyed just a few miles off of the beaten trail to enjoy a less crowded, slower pace at the Sabillasville’s Annual Mountain Fest and 32nd Annual Kenny Clabaugh Car Show. Sponsored by the Northwestern Frederick County Civic Association (NWFCCA), the proceeds from the car show benefit the organization’s ongoing commitment to three annual scholarships awarded to deserving students within the local community.

Saturday, with temperatures in the 60s and no rain in site, participants enjoyed the beautiful day at Sabillasville Elementary School in the Catoctin Mountains, just a short distance from Thurmont. Over twenty vendors sold everything from antiques, crafts, and jewelry to homemade cakes and cookies.

Sunday marked the 32nd Annual Kenny Carbaugh Memorial Car Show. Again, mild temperatures and clear blue skies greeted this year’s partici-pants. The show was very successful, with over one hundred cars registered, including antique pickup trucks, fire trucks, sports cars, and a rare BMW car. Car show chairman, Jason Worth, awarded twenty-five top-voted plaques. Best of Show was awarded to Gerald Poffenburger from Hagerstown for his 1941 Plymouth Two-Tone Pickup Truck. Dash plaques were handed out to the first fifty entrants, and over twenty doorsprizes (which were donated from local businesses) were also handed out to ticket winners. Thanks to all who donated.

Many antique car owners attended the show for the camaraderie and common interest. Entertainment for the car show was provided by local DJ, Steve Hahn, for the third year. Thanks to Lori Worth and Harp Worth for their continued support and assistance with the car show.

Volunteer members of the Civic Association often hear that many venture to the Mountain Fest to enjoy the country atmosphere with the surrounding picturesque farms and orchards, the slower pace, and the safer environment for their families. The NWFCCA would like to thank the many volunteers who helped to make Mountain Fest weekend such a success. Those who merit special thanks for their many years of service are Kenny Howard; Arthur and Sarah Gernand; Edgar Hatter; and Ed Coleman and his daughter, Donna.

We at the Civic Association would again like to thank you for your continued support and commitment to the NWFCCA and the community! On a personal note, I would like to recognize my mother, Shirley Lee Harbaugh, of Sabillasville, and who was raised in Greenstone, Pennsylvania. Mom was a charter member of NWFCCA in good standing for over thirty years. She was always thoughtful and supportive and available whenever help was needed. Mom passed away in late May 2015. I loved my mother very much, and she will be missed by many that knew her, especially by Dad and me. 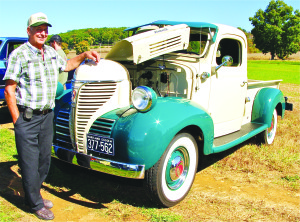 Best of Show was awarded to Gerald Poffenburger of Hagerstown for his 1941 Plymouth Pickup Truck at the 32nd Annual Kenny Clabaugh Car Show at Mountain Fest on October 11, 2015.