By TheCatoctinBanner.com On September 29, 2016 · Add Comment · In Community News

Noland Kinna is a twelve-year-old Thurmont resident and student at Thurmont Middle School. He is an avid baseball fan and player of the game. In 2011, Noland was diagnosed with a benign inoperable brain tumor (low-grade glioma), with an unusual mutation only seen in a handful of patients across the nation. On October 10, 2012, Noland had a brain biopsy and started chemotherapy soon after. He went through seventeen months of chemotherapy, which was very successful. After chemo ended in March of 2014, Noland was able to take a complete break from treatment for one-and-a-half years. Last fall, after a routine MRI, it was determined that Noland needed to begin another course of treatment, as his tumor had grown 25 percent. At this time, Noland is participating in a Biological Therapy Clinical Study known as AZD6244 (Selumetinib) for children with low-grade gliomas. This study is sponsored by the National Cancer Institute. Noland will continue this treatment until November 2017.

Noland was given the opportunity to be on the field with the Orioles players at Camden Yards for batting practice on August 29, 2016. This opportunity was arranged by the Casey Cares Foundation, which enhances the lives of critically ill children by providing and organizing special events for the kids and their families.

At 4:30 p.m. on Monday, August 29, Noland and his family, including his brother Wyatt Kinna, his mom and dad, Nick and Melissa Kinna, and his favorite and only uncle, Corey Kinna, were escorted on to the field at Camden Yards to experience that night’s batting practice from the field. It was an awesome experience that included getting autographs and photos with the players. Almost immediately after entering the field, a ball rolled to their feet, and the escort told them they could have it. A short time later, that ball was signed by Manny Macado and other players. Noland told his mom that the experience was the best he’d ever had.

Noland’s mother said, “We have been very fortunate to work with foundations like Casey Cares to help provide opportunities for Noland to help him feel better while dealing with his illness.”

The Casey Cares Foundation is a non-profit that works with families in six states throughout the Mid-Atlantic and in Washington, D.C. The foundation provides ongoing and uplifting programming to critically ill children and their families (including siblings). 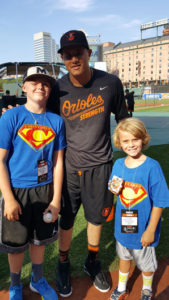 Manny Machado (third baseman for the Baltimore Orioles) stands with Noland and his brother, Wyatt, after signing the baseball.