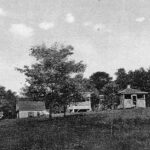 By TheCatoctinBanner.com On March 30, 2022 · Add Comment · In Arts & Entertainment

Timothy Ross stepped off the passenger car at the train depot near the Maryland Tuberculosis Hospital. He was used to the large platforms in cities like Baltimore, Washington, and Philadelphia. This was a small 15×30-foot wooden building surrounded on all sides by a wide porch. It could fit inside of the washroom of Penn Station, where he had boarded the train.

He noticed he was the only person on the platform. He expected more activity here, but it was still a bit early in the season for vacationers to be heading to Pen Mar, the nearby resort area. Green was starting to appear on the trees, and the sky was a bright blue. He felt just a hint of chill in the air. It wouldn’t be long before vacationers sought to escape the heat and humidity in the cities and headed for higher ground.

“So this is where I’ll die,” he whispered to himself.

He wondered if he had made the right choice coming here. He was a city boy, born and raised. He had never been able to escape the city, even in the heat of the summer, to come to a place like this. Tim lived in the night, in the gyms and arenas where he made his living in the ring…or at least he had.

His chest heaved, and he started coughing. He grabbed for his handkerchief and covered his mouth. When the hacking stopped, he pulled the handkerchief away and saw phlegm and spots of blood. So much for the clean, fresh mountain air helping him.

Tim walked into the station. He saw no people, just empty benches. There wasn’t even a stationmaster. It was as if people were only dropped off here, and no one ever left on the train, so no one needed to buy a ticket. That thought sent a chill down his back.

A door opened, and a man walked out of the washroom, drying his hands. He was a large man, almost as large as Tim had been before he had gotten sick. He was dressed in white, so Tim guessed this was the man he was supposed to meet.

“Are you from the sanatorium?” Tim asked.

The man nodded. “I’m Frank Larkins, one of the orderlies there and a driver when they need one.”

Frank smiled and clapped his hands together. “Great! Let’s load your bags in the car and get you to the administration building.”

“Not at all. You’re actually on the sanatorium property now. This is our station.”

“I thought this was the station for the resort.”

Frank shook his head. “That’s Blue Ridge Summit. It’s a little further up the line, just across the Mason-Dixon in Pennsylvania.”

Frank grabbed the two suitcases Tim had brought with him and headed out the front door. He walked down the steps from the front porch to the waiting car. It was a gray four-door Ajax sedan. Tim had seen plenty of them in Baltimore, but this was a newer model that had come out in 1926. Frank went around to the far side and put the suitcases in the back while Tim climbed into the car.

Then, Frank climbed into the driver’s seat. He started the engine and drove along a dirt road that led uphill.

“I used to live in Baltimore until I got this job,” Frank said. “I saw you fight Rusty Barrett last year. I won five dollars when you knocked him out.”

He hadn’t fought in three months. His stamina and speed were gone. He was withering away. Even if he got rid of the tuberculosis, he wondered if there would be enough of him left to recover.

Frank seemed to read his mind. “Don’t you worry, Mr. Ross. You got diagnosed early enough that this place can help you. You aren’t even in the main hospital. You’re in a cottage. That’s where they put the people who are in good shape.”

Tim shook his head. “No, they put them on top of a mountain in the middle of nowhere. There’s as many trees here as there are people in Baltimore.”

“And that’s why you’ll get better. You aren’t in Baltimore. That’s what made you sick. They did a study last year that said there’s an area of the city that has the highest death rate in the country from TB. The best thing you could do was get out of that cesspool.”

He turned onto a drive that swung around in front of a three-story stone building that could have passed for one of the rich people’s homes in Mount Washington. Frank turned off the engine, and they walked onto the porch and through the front doors. They were in a hallway that led to a staircase to the second floor or the rear of the building. The rooms off the hallway all had closed doors. At a desk near the door, an attractive young nurse sat smiling up at them.

She looked at Tim and smiled, showing bright white teeth.

“Emily, this is Tim Ross, a new patient,” Frank said. He glanced at Tim. “Emily is one of the student nurses at the training school here, and if she wasn’t behind that desk, you’d see she has great gams.” Emily blushed and giggled. “I need to know what shack he’s in.”

Emily nodded and looked at her notes. “He’s in pavilion five. Also, I’ll need you to come back here after you finish putting your things away. I’ll have the paperwork you need to sign, your schedule, a map of the grounds, and a few other things.”

Frank and Tim walked back outside. Frank drove the car around the side of the administration building. Tim saw two rows of long, wooden buildings leading away from the back of the administration building. Frank stopped in front of one, and they walked to the entrance. Tim saw four people sitting on chairs on the porch that ran the length of the front of the building. The building was wood frame, but it sat on brick piers.

Inside, there were two wards, one off to either side of the entryway, which was a large sitting room. Frank looked at a chart on the wall, turned left, and walked to an empty bed near the end of the ward. Tim saw that all the windows on the ward were open, as well as doors that led onto the porch. More fresh air.

“So, this is your bed, but you’ll keep your things in the back,” Frank said.

He walked through a doorway behind the bed that led into a long rear room that nearly ran the length of the building.

“These compartments are where you can change and store your stuff. You have compartment three, which is also your bed number. The toilet room is in the middle.”

Frank laid a hand on his shoulder. “Don’t worry, Mr. Ross. It’s confusing now, but everything will be all right.” Then, he looked around, leaned closer, and whispered, “Be careful. Don’t wander off alone and don’t trust anyone. No one is safe. Don’t say anything about this.”

Frank then straightened up and smiled, but Tim could tell it was a fake smile.

“I’m going to leave you to unpack, because I have some other things to do. Once you’re finished, head back and talk to Emily.”

Frank left and Tim walked out onto the porch, although with the large sliding windows between the wall columns, it was almost as if the ward was part of the porch.

He had to admit, the view was nice if you liked to look at trees and lawn. He started coughing so hard, he nearly dropped to his knees. Instead, he leaned on the rail and watched Frank drive off.

What had the man been talking about? More importantly, what had Tim gotten himself into?