New History in the Making at Pen Mar Park

Located on the border of Maryland and Pennsylvania on South Mountain, Pen Mar Park became a prominent resort in the late 19th century. The owner of the Western Maryland Railroad felt the scenic location in the cooler Blue Ridge Mountains would entice Baltimore-area residents out of their city dwellings during hot summer months. And, utilizing his railroad, the city dwellers did just that.  Back in its heyday, Pen Mar Park boasted many first-class hotels, a dance pavilion, dining hall, playground, scenic overlook, roller coaster, Ferris wheel, carousel, penny arcade, shooting gallery, movie theater, beer garden and a miniature train.

The park was by far one of the most popular resorts in the eastern United States, with close to 20,000 visitors taking the 71-mile trip from Baltimore to Pen Mar each summer weekend. President Grover Cleveland, Dr. Walter Reed, and even actress Joan Crawford counted among the Pen Mar’s early visitors.

Unfortunately, by the end of the 1920s, the once-glorious Pen Mar Park began to lose its luster, as tourist numbers declined. Over the next few decades, the park fell into rapid decline.

In 1977, Washington County purchased the park, and it was re-opened in 1980. Currently, Pen Mar Park holds live music concerts during the summer in the multi-use pavilion (located at the site of the original dance pavilion). Visitors also enjoy the playground, rent the pavilions for gatherings, hike the Appalachian Trail, and take in the picturesque view from High Rock Summit.

It is like stepping back in time to visit the Pen Mar dance pavilion on Sundays between 2:00 and 5:00 p.m., where various musicians provide entertainment as part of the Jim and Fay Powers Music Series. Visitors of all ages dance or simply watch and soak it all in. Whether a seasoned professional of swing or ballroom dance or a complete uncoordinated amateur simply wiggling to the tune, this place and activity replicates the spirit of the Pen Mar Park of yesteryear. Twenty-five to fifty percent of those who attend are considered regulars, with dance groups from Pennyslvania, Viriginia, and Maryland.

On an afternoon at the dance pavilion at the end of June, where folks gathered to watch, listen, or dance to fifties music and easy listening provided by “Détente,” David Jacoby of Gettysburg was visiting. He took relatives on a tour of the area and included stopping at Pen Mar Park, Thurmont, Emmitsburg, and Gettysburg along the way. He said, “I just like this place. I’ll stop when I’m close by and have some fun.”

Doris Flax was raised in Emmitsburg, but currently lives in Mechanicsburg, Pennsylvania. She started visiting Pen Mar Park when she was just two years old and visits every chance she gets today. “My mother would bring us up here every Sunday, back then, to dance. Just like it is now.”

Shirley Rienks of Waynesboro, Pennsylvania, especially remembers “Everybody’s Day” when she was a youngster. She said, “They had babies. I have a picture of that.” Everybody’s Day will be held on August 26 this season. It will feature the Ray Birely Orchestra. The Rocky Birely Combo is also one of the featured bands at Pen Mar Park. Rocky’s father, Ray Birely, was the original band leader at Pen Mar back in the day.

Joe Etter of Carlisle, Pennsylvania, has been dancing at Pen Mar “off and on for about twenty years.” A seasoned dancer, he’s known to be the local expert about everything Pen Mar Park. He recalled his favorites from childhood: the penny arcade and the carousel.

Vicky Anderson from Montgomery County, Maryland, grew up in the area. She returns when she can and makes a day of it by stopping for a meal in Thurmont, bringing a book to read, and then dancing, “It’s really nice. The view from High Rock is just breathtaking.”

The Pen Mar Park Music Series will continue through September 30 this season. Pavilion reservations and park information may be obtained by contacting the Washington County Buildings, Grounds & Parks Department at 240-313-2807. 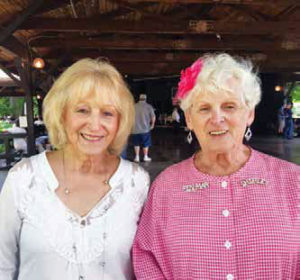 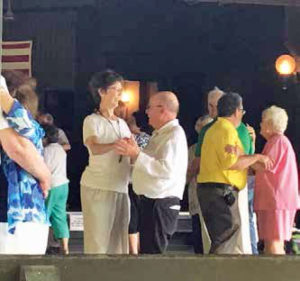