By TheCatoctinBanner.com On November 24, 2016 · Add Comment · In Arts & Entertainment 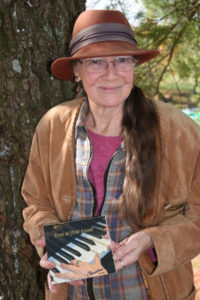 Sabillasville resident, Christine Maccabee (pictured right), has been a volunteer at Frederick Memorial Hospital (FMH) since 2012. In that role, she plays a baby grand piano on Wednesdays for a couple of hours. She first encountered the piano in the lobby of the hospital when she went there for one year after an accident, which had damaged her right arm. For close to a year, she had to discontinue playing her guitar and organ for churches. “This was a very depressing time for me, until I found the FMH piano. Its tone and light touch was a perfect match for me,” and it was therapy for her injured arm. She also discovered that her music was a gift for people waiting there in the lobby.

The piano was a gift to the hospital from Jeff and Patty Hurwitz, and set up to be a player piano. However, “It is a wonderful instrument to play on by a real human being.” She feels that the hospital is a perfect place to share her music because, “music is a healer.” Patrons and visitors often thank her for her music, and once, a father and young daughter began dancing together to an Irish waltz she was playing!

Christine is proud to be releasing her third CD of music entitled Love at First Touch recorded live at FMH by her son Ashley Maccabee. Her original song, “Love at First Touch” was inspired by the love she felt when first playing the baby grand in the lobby of FMH. The words and music for the song came within a half hour. She said, “It was meant to be.”

Christine also wrote the second song on the CD called, “Forgive Me For Loving You”—about a man, not a piano! The remainder of the music on the CD are various versions of twenty-two songs from the 1920s through 1070s, songs like “It Had to be You,” “Memphis Blues,” “Yesterday” (Beatles), and “What the World Needs Now” (is Love Sweet Love). The $15.00 CD is available at E Plus Copy Center or by email at songbirdschant@gmail.com.

Christine had created two earlier CDs of original songs, “Songpoems from the Heart of a Naturalist” and “Winter Wait.” “Songpoems” was recorded before a live audience at Apple’s Church in 2002. “Winter Wait” was recorded live in her living room. “These are both very personal CD’s, with songs I didn’t want to take with me, if you know what I mean…” They include a mixture of music on piano, guitar, and vocals, many expressing her deep love of  nature.

Christine has been studying and playing piano since she was just four years old. She was raised south of Baltimore in Brooklyn Park, Maryland. She claims that her mother couldn’t keep her out of the woods behind her house. The first song on her first CD is called “Child’s Song.” It was inspired by her adventures as a child in the woods. Her love of nature drove her to become a naturalist, but she’s a trained musician and artist as well. Christine graduated from Hood College with a B.A. in Music. In her twenties, she sang in the Verdi Requiem Mass as soprano soloist and did roles in Mozart operas at Frostburg State College, all while being inspired to write her many folk songs.

Christine has taught private piano, voice, and guitar in this area for twenty years, while always very busy with environmental things and being a mother of three. At heart, she said, she “was always out climbing trees and experiencing the glory of the natural world.” It would be impossible to separate that love from her music!