The End of a Generation in Thurmont

When Thomas H. Shelton died on February 19, 1938, Frederick County lost its last Veteran of the Civil War, seventy-three years after the war ended.

Shelton died at the home of his daughter-in-law, Stella Shelton, who lived near Rocky Ridge. The ninety-seven-year-old had been healthy at the start of the month, but then his health had quickly turned, and he had been sick for about a week prior to his death.

As a young man of eighteen, Shelton had served in Company I of the 1st Maryland Regiment. He had missed fighting at the Battle of Antietam in 1862, because he had been taken as a prisoner of war at Harpers Ferry the day before.

Eventually he was paroled, and he returned to his company and was with them when they fought at the Battle of Gettysburg in 1863. His company did not fight in the other nearby battle at Monocacy in 1864.

When the war ended and his regiment was discharged, Shelton re-enlisted with the 13th Regiment.

Frederick County had lost its last two Civil War Veterans within four months of each other.

Although Shelton hadn’t been a native Frederick Countian, Henry Clay Fleagle of Thurmont had been. He had been the second-to-last Civil War Veteran in the county, and the last one who had lived his life here.

Fleagle died in November 1937 at age ninety-four. He was a first-generation American whose parents had been born in Holland.

He had been born in Unionville and served in the Civil War under Capt. Walter Saunders.

“He served for nearly the entire four-year duration of the war, charging with the line of blue at Gettysburg,” the Catoctin Clarion reported.

The end had been a relief for Fleagle. The Frederick News reported that he had been only partially conscious the week before his death at the home of his son, George Fleagle.

Henry’s wife, Lillie Creager, had died two years earlier. He was survived by one daughter, who was married to Wilbur Freeze, four sons, nineteen grandchildren, and twenty great-grandchildren.

Henry was also the last member of the Jason Damuth Post of the Grand Army of the Republic in Thurmont.

It would still be nearly two decades before the last Civil War Veteran died. The final Veterans of the Confederate States armed forces died in the 1950s. A number of men claimed to be last remaining Confederate Veteran. These men died throughout the 1950s. Many of their claims were debunked as more information about their births was uncovered. The largest problem in verifying their claims was that many Confederate records had been destroyed or lost, because the Confederate government had no official archive system.

Pleasant Crump of Alabama died at the end of 1951 at the age of 104. He was the oldest of the group of Confederate Veterans who had a verified service record.

President Dwight D. Eisenhower said, following Woolson’s death, “The American people have lost the last personal link with the Union Army … His passing brings sorrow to the hearts of all of us who cherished the memory of the brave men on both sides of the War Between the States.”

Photo is from 1916 and shows a group of Civil War Veterans posing in front of the grocery store that stood on North Church Street. This building was located in the now-vacant lot next to the Historical Society building. 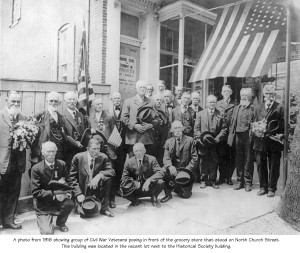 A view of Veterans standing in front of the old town hall.