Our Neighborhood Veterans On The Wild Side

The Daughters of Charity went to China in the early 20th century to care for the sick and needy and to spread the word of God.

China experienced wars and unrest during the first half of the 20th century, with the rise of Communism; the Nationalist Party; and Chiang Kai-shek, China’s leader for nearly half a century.

The Daughters of Charity opened a hospital in Kan Chow in 1923 and one in Taiwo in 1928. From that point on, they did their best to care for all those they could. Their operation was funded by contributions from other Daughters of Charity houses. The sisters did not interfere in politics and were allowed to operate their hospitals. That changed in 1930.

The Central Plains War broke out in China between the Chiang Kai-shek’s Nationalist government, which had come to power in 1928, and several regional military commanders who challenged the government’s legitimacy. The war eventually involved a million Chinese soldiers, of which three hundred thousand were casualties. This does not even consider the number of civilian casualties.

Father Leon Cahill in Ganzhou warned the sisters of a coming attack by bandits on March 15, 1930. They made an escape plan, prayed they wouldn’t need it, and continued their work. Then, on March 20, word came that the bandits were nearing. The hospital staff dropped what they were doing, which included leaving their lunch, which had been prepared already, uneaten.

“Donning the garb of Chinese coolies and guided by a faithful servant, they were escorted to the distant home of a Christian,” the Gettysburg Times reported. Their habits were hidden in rice bins. The group was made up of six sisters, three Catholic priests, two servants, and a French bishop.

They were only able to stay at the house for a short time, though, because too many people knew where the sisters had gone. Under cover of darkness, they were taken to the house of a pagan, who allowed them to stay in a hidden room.

The Communists, who by then must have been frustrated by the Catholic group’s escape, offered a $200 reward for each sister or priest brought to them. Out of a fear that they might be betrayed, the friends of the sisters led the group to a third location, where they were able to rest for a few days.

Then began a long journey across China to try and reach safety, while still helping those the sisters had been sent to serve.

While this group was on the run, five French Daughters of Charity were captured in October and held prisoner until Christmas, before they were freed.

As the American sisters moved about the countryside, they were joined by two additional sisters, and they were sometimes able to wear their habits. When they did, they had to travel in sedan chairs with the curtains closed. “Eventually, they finally returned to their hospitals, despite the warnings, and against the wishes of friends, in the garb of their order,” the Gettysburg Times reported.

They intended to resume their work, but the hospitals were in ruins. “Everything in the two hospitals had been destroyed, except two pictures hanging on the wall of a small office in the hospital at Kan Chow,” according to the newspaper.

At this point, it was decided to bring the sisters back to the United States. The eight sisters left on December 26, 1930. The Daughters of Charity were Sister Vincent Louise DeLude, Sister Anselma Jarboe, Sister Helena Lucas, Sister Emily Kolb, Sister Eugenia Beggs, Sister Pauline Strable, Sister Catherine O’Neill, and Sister Clara Groell. They had spent nine months as fugitives because they had wanted to help the sick and poor.

The sisters in Emmitsburg spent days preparing a welcome for Sisters Helena and Clara, who were the only ones who returned to the motherhouse in Emmitsburg. The others returned to other Daughters of Charity houses. 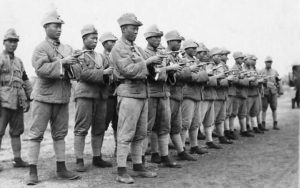 A pistol battalion of the Northwest Army during the Central Plains War in China.